Less than 5% of budget has actually been spent, according to PRWeek analysis.

The "Get ready for Brexit" campaign, which Michael Gove boasted would be "one of the biggest peacetime public-information campaigns this country has seen", was launched at the start of September.

It was supposed to encourage Britons to prepare for the UK's departure from the European Union on 31 October, with ads running across TV, newspapers, social media, billboards and other platforms. 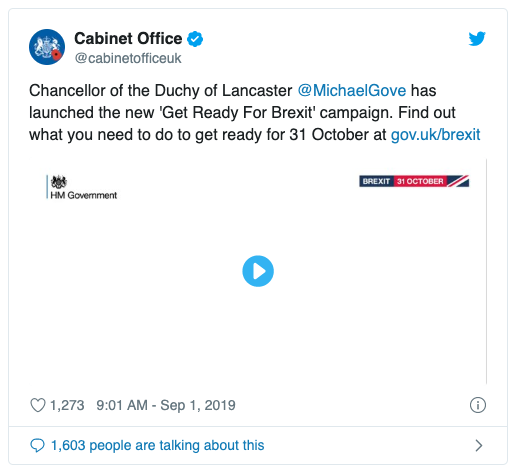 Yet Cabinet Office figures released last week show that just £4.6m was spent on the campaign in September.

Last week, the government admitted the campaign had been put on hold, after the EU gave the UK a Brexit extension until the end of January. 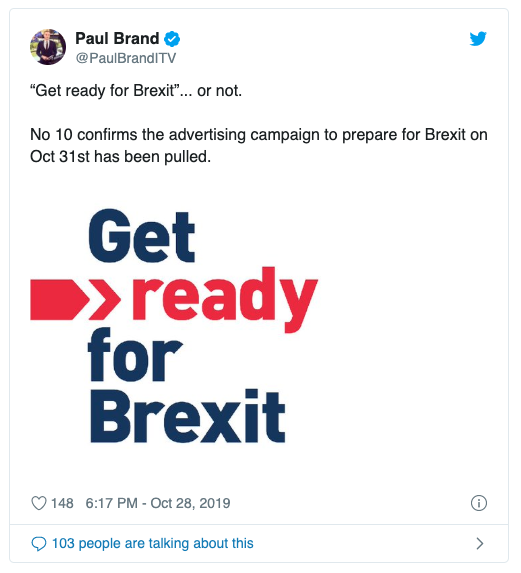 Campaign sister title PRWeek understands that the campaign remains paused and may be scrapped altogether, depending on the outcome of next month's general election.

PRWeek has previously revealed how Whitehall officials are faced with the dilemma over preparing people for Brexit, yet being accused of wasting £100m if Britain ends up remaining in the EU.

The effectiveness of the campaign has come under increasing scrutiny in recent weeks. The National Audit Office warned last month that it may have "limited impact" and last week Meg Hillier, chair of the Public Accounts Committee, questioned whether the campaign "is actually delivering any tangible benefits".

In a letter to Hillier, published last week, John Manzoni, chief executive of the Civil Service, revealed that the Cabinet Office convened an "EU exit campaign assurance panel in August 2019".

He said the panel comprised "senior marketeers to provide professional oversight and challenge to the campaign".

It is chaired by Karen Blackett, UK country manager at WPP and a non-executive board member at the Cabinet Office.

In addition, a "Brexit comms hub finance committee", made up of directors of communication from across Whitehall, provides "strategic oversight of our financial and operational plans to ensure campaign budgets are justified and resources are rationally allocated", according to Manzoni's letter.

The government has also asked marketing analytics consultancy Ebiquity "to provide a deep dive into our activity before we purchase media space" for the "Get ready for Brexit" campaign, he said.

Movember spoofs 'Get ready for Brexit' campaign ahead of moustache season