The government's campaign has been an absurd exercise in raising awareness of a known unknown.

If there’s one thing that’s definitely true, without a shadow of a doubt, it’s that the UK is leaving the European Union on 31 October. We know this not only because Boris Johnson, our political and moral leader, has continually stated it to be the case; we also know it because the date is plastered all over every spare corner of advertising real estate in the country, physical and digital, alongside a simple message imploring citizens and businesses to get ready for Brexit.

OK, I’m forking with you, as they’d say in The Good Place; in reality, we still don’t know when, or even if, we’ll do the funky Brexit. The chances of it happening by the end of the month have certainly gone up since the prime minister reached a new deal with the EU last week, but it now seems highly likely that the deadline will be extended, even if MPs support the deal – that’s because over the weekend they voted to pass the Letwin amendment, which delayed the process so that they can scrutinise what Johnson has brought back from Brussels.

I can see you falling asleep, but the point is that there’s a high likelihood that 31 October will come and go and the UK will still be a fully fledged member of the EU, even if it is clearly on its way out imminently. And if that comes to pass, "Get ready for Brexit" must surely be regarded as the most expensive misinformation campaign in British history, stating as fact something that was never the government’s decision to make.

The government now seems to have acknowledged this by altering the language on the Brexit website, stating that the UK "could still leave with no deal on 31 October 2019". This is possible (though unlikely) if the EU refuses to offer an extension. The campaign’s digital display ads, which I located quickly while browsing the Telegraph website (chosen at random), remain unchanged.

The date is no longer being treated as a promise, though, but a warning. That hasn’t, of course, changed the language coming out of the mouths of such entities as Michael Gove.

It’s the latest eyebrow-raising development in a campaign that stunned the ad industry with its reported £100m budget and has gone on to demonstrate brilliantly the surreal potential of programmatic buying. As readers will no doubt be aware, the campaign has been everywhere, including placements so crassly absurd it’s hard not to think someone did it on purpose for the lols. Look where it appeared in this story about the challenges on the Irish border, for example: 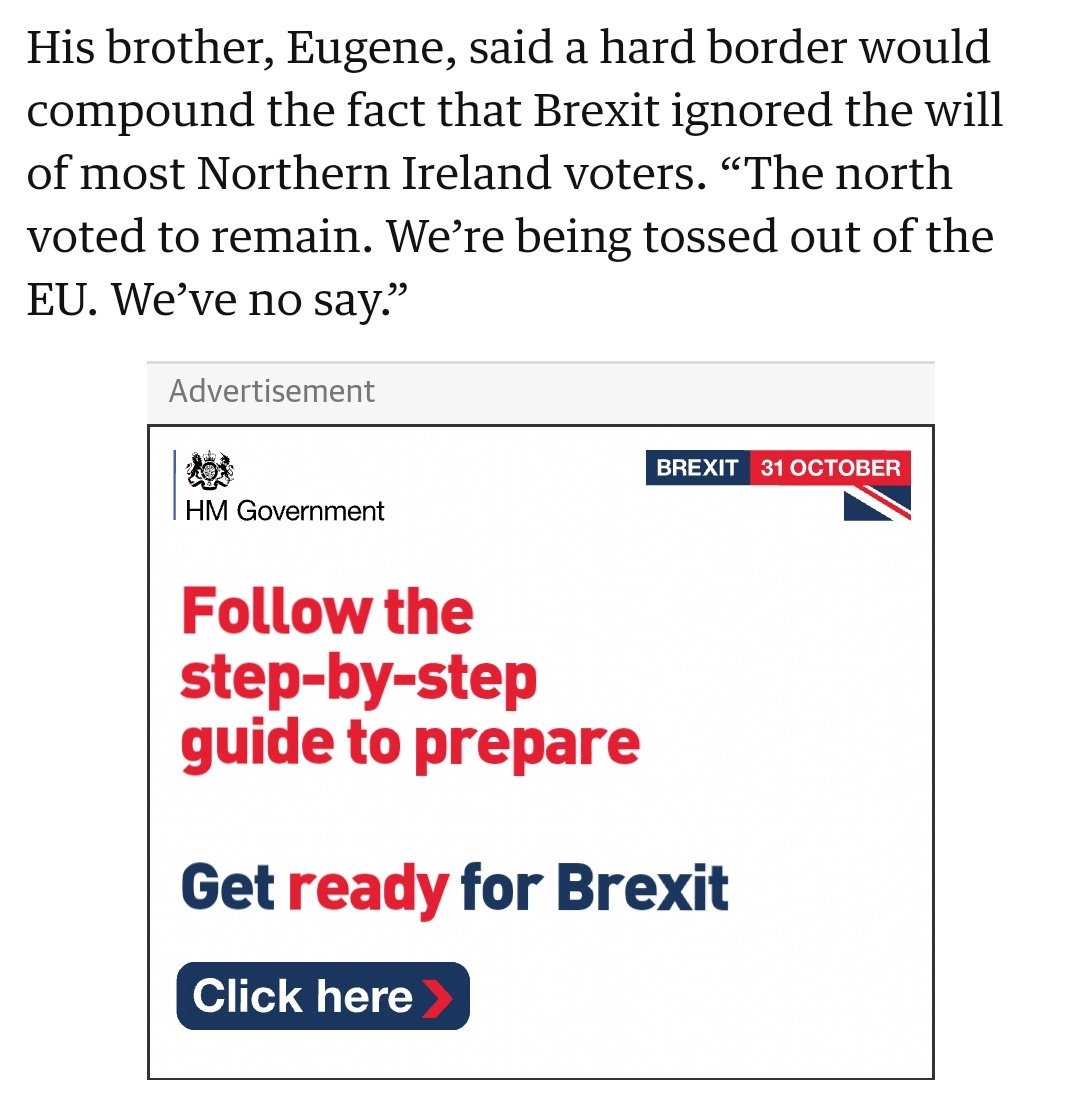 (Fortunately for Eugene, his worst fears have been avoided – thanks to Johnson’s decision to shaft his former allies in the DUP).

And then there’s the outright funding of the saboteurs; the audio ads appeared at the start of a couple of episodes of Remainiacs, a podcast whose objectives and cultural identity should be pretty clear from the name. After listeners complained about the ads, the hosts announced all of the show’s income from the campaign would be donated to Led by Donkeys, helping to support the organisation’s work of frustrating the will of the people.

Look, maybe I’m just being a negative nancy: the pertinent point, surely, is that this country is about to enter its greatest era since we put a stop to Mr Hitler’s little game (and made him think again), and we shouldn’t get distracted by minor quandaries.

I’m not objecting to the idea of actually providing important information either, especially when it’s clear, tailored to an audience and effectively targeted, such as this guide from the Advertising Association on this very website. But when you’re a government and you spend a vast sum promoting a party-political position that you may or may not be able to deliver, you have questions to answer.

How you need to prepare for Brexit

Turkey of the Week: An ad both Remainers and Brexiters can hate