Campaign asked members of its 2019 A List to name their favourite Instagrammers. 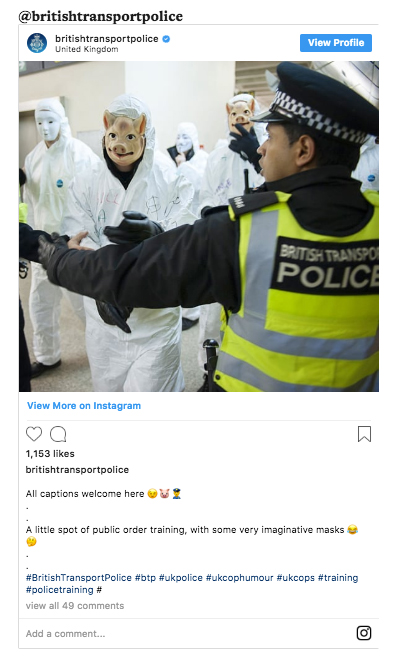 "If you are reading this and in any way involved in the social team, please get in touch. I think you’re amazing," Gravity Road's founder Mark Eaves writes. The account is dedicated to showcasing both serious and humorous behind-the-scenes moments of the British Transport Police.

The parody account, which supposedly features old photos taken using a disposable camera, has had a lot of the A Listers laughing. Adam & Eve/DDB’s chief creative officer, Richard Brim, said: "A little bit of sick comes up in excitement every time they post."

Atomic London’s founder and creative partner, Guy Bradbury, thinks the photos, which explore the universe, are "out of this world".

Hello! I’m Kat (@amputee_kat) and I’ll be taking over @behindthescars_ today and tomorrow! I want to talk disability, self love, returning to dance as an amputee - all that fun stuff! If you have any questions please do send them across and I’ll answer them on the story. ???? . Kat "When I was 18 I contracted meningitis while in my first term at University. This meant that I had to have both of my legs amputated below the knee, and it left my body dotted with scars. Septicaemia runs deep into your skin, and so a lot of these scars are thick and sensitive reminders of the pain I endured - but also of the calloused strength I grew. As well as scars, because of the liquid pumped into my body to keep me alive, I was left with waterfalls of stretchmarks. This mapping of my body is a sign of what I’ve been through. That my body healed, and that it, and my mind are thicker and more interesting as a consequence." @amputee_kat #behindthescars

Models proudly posing with their scars struck a note with Proximity London’s chairman, Louise Barber, who praises the account because it "celebrates courage, empowerment, positivity and encourages us to embrace the skin we’re in (relevant to someone close to me)".

Dear HSBC: can a bitch at least see her pay cheque before the world debits her account? So rude. #nodebitsbefore3pm #prayforluke Sincerely HRH

Woody from Toy Story (my personal hero) always complains about a friggin snake being in his boot. Can’t even imagine how scary that would be. ?? How does a snake even get into a person’s boot? It’s a snake, and snakes live outside. ?? #SnakeFacts #Thinking #RuinedABedWithSand

PHD UK’s chief executive, Verica Djurdjevic, recommends scrolling through this account, which perfectly captures the strange (but priceless) things people have overheard in London, for a laugh during the commute.

The art-inspired feed, which compares contemporary photos to traditional paintings, photographs and sculptures, is McCann Worldgroup UK chief executive Mark Lund’s favourite because as the account says: "For every pic of Lindsay Lohan falling, there’s a Bernini sculpture begging to be referenced."

Things I regret: Thinking parents were slackers for leaving the office at 4.59pm. Taking off my engagement ring in an interview for fear it screamed "might get knocked up". Giving off an air of someone whose ovaries are more resistant to Pampers ads than the candidate before. (A candidate who might be male). Sitting at my desk miscarrying because I couldn’t face my boss knowing I’m ‘trying’ for fear it might scupper a promotion landing. Remaining silent as interviewers talked of 15% Fitness First discounts when I wanted to know about maternity benefits. Playing the employment system but, in turn, being played as I became one of the 54,000 women (not including those on gagging orders) every year to lose her job for simply having a ????. Contrary to quips like "it was your choice to have a child", parenthood isn’t a recreational side hustle. Through all the gummy smiles and spontaneous shin cuddles, it’s laced with loss, postnatal depression, separation anxiety, irretrievable breakdown and financial strain. To be brutally chopped out of the job market for taking on Mother Nature’s biggest task simply takes us back to the Dark Ages. Change can be: interviewers mentioning maternity benefits in the same sentence as holiday. It can be employers not looking for engagement rings and subconsciously striking someone off the list for fear of procreation. It’s as simple as the word ‘paternity’ being used as much as ‘maternity’. It’s my 26-year-old self - all colleagues, in fact - not assuming someone is a slacker for leaving at 4.59pm #flexappeal #flexibleworking #maternitydiscrimination **to read the full feature I wrote for @stylistmagazine see the link in my bio**

"She uses her voice for a noble purpose. I’m passionate about sharedparenting – a level playing field for working mums – and she does it with such good humour," Stephanie Marks, Havas Media UK’s managing director, writes about the Heart presenter and Marie Claire columnist, who says it like it is.

"This is even fucking better than Sweetener!"

The Hollywood writer's account, which adds witty captions to photos of the royal family, is a favourite for Jackie Stevenson, founding partner of The Brooklyn Brothers. She said: "Wickedly funny and often just wicked."

This is crossed arms by the artist Robert Mapplethorpe. Reposted from @ dimitri_unique. We were all three the dearest of friends.. I was wondering what image might embody thoughts running through my mind this Valentines Day. The terrible reality of the Parkland massacre one year ago, and the mortal hearts lost, Of the polarizing political atmosphere in our country. Of the continuing fight for equality for all people. I chose to repost this image of Roberts. One of hope and the immortal stronghold of love.

"Because she’s not even real, she’s a bot with 1.5 million followers," Grey Consulting’s chief executive, Leo Rayman, writes about the 19-year-old robot from Los Angeles who's boasting a huge fanbase on the platform (almost as many as Kylie Minogue).

What a year, full of love, laughter and fun. Here’s hoping that 2019 is full of love and hope for all. Happy new year to all my family and friends near and far ?????? #newyear #family #friends #love #hope #happiness #2019 #2018 #insta #instagood #topnine2018 #instagramhub #instadaily #instagramers #photography #instagram @mimikhanxx @ladnouveau @adelemorriskhan @seb.khan

As chosen by the Ebiquity managing director, global partnerships and events, herself: "I’m fairly prolific on Insta and everyday, when I look at my galleries, they remind me to be thankful of how rich my life really is."

Mums are like buttons they hold everything together ?? • • • #mum #wellness #family #instagood #daughter #love #mentalhealth

Lots of proud A List parents boasted about their children’s Instagram accounts, but Oystercatchers' chief executive, Suki Thompson, slyly writes of her own offspring: "One university student promoting well-being and positive resilience support."

Head to the online home of the Campaign A List

The great Facebook messaging merger: what this means for marketing

Instagram bows to pressure and bans all graphic self-harm images