Today we are proud to present the latest edition of The Gunn Report, the global index of creative excellence in advertising. This new report encapsulates the overall performance of the advertising industry based on the results of 45 global, regional and national creative awards in 2015.

And it is good news for USA’s adland, which retains its place as the most creatively awarded country in the world.

Last year saw a stellar performance by BBDO New York, which takes the lead in the Most Awarded Agencies in the World table (with 47 points), having moved up from 7th place in 2014. The agency previously held the title once before, back in 2008. Adam&eveDDB (London) and AlmapBBDO (São Paulo) tied for 2nd place (43 points) with Wieden+Kennedy (Portland & New York) ranked 4th (41 points).

BBDO New York’s multi-award winning work includes the Twix Bites "#TBT Bites" campaign, which ranks #3 in the Most Awarded Commercials in the World, alongside Snickers’ "Brady Bunch" at #6 (a tie with Sainsbury’s Supermarkets’ "1914," from AMV BBDO London), and GE "Enhance Your Lighting" in #25 position; its American Red Cross "Hope.ly" ranks #28 in the Most Awarded Digital Ads in the World.

Contributing to USA’s great year is Wieden+Kennedy (Portland & New York), which retains its 4th Most Awarded Agency position, with work such as its Old Spice "Dadsong" in at 17th place in the Most Awarded Commercials of the Year and Jordan Brand "Re2pect," ranked #24 in the Most Awarded All Gunns Blazing in the World table (the integrated/innovative/titanium work). 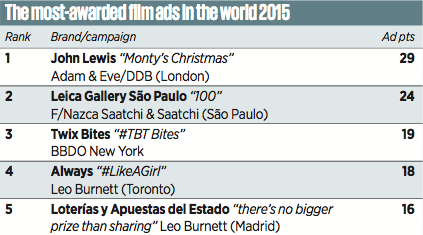 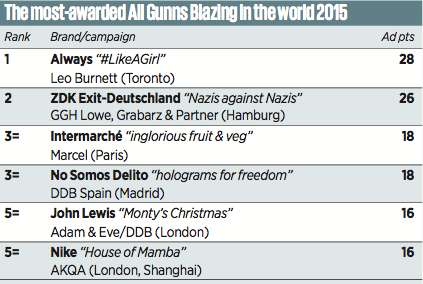 Other US agencies that have risen up the league tables are Droga5 (New York) ranked #9 in the world (up from #14 the previous year). The agency’s Under Armour "I Will What I Want — Gisele Bundchen" deserves mentioning, as it’s ranked #3 Most Awarded Digital ad in 2015. R/GA (New York, Los Angeles) comes in at #13, with its work for Ad Council, "Love Has No Labels," ranked #9 in the Top 10 Campaigns Across All Gunn Report Media Categories. And Leo Burnett (Chicago) takes #14 in that category. R/GA and Burnett both missed out making it into the league table in 2014, so 2015 has been a good year for them.

The amusing and brilliant Geico "Unskippable" campaign by The Martin Agency (Richmond) did very well, achieving #2 in the Digital table and #8 in Film, helping the agency achieve a three-way tie at #20 for Most Awarded Agency. 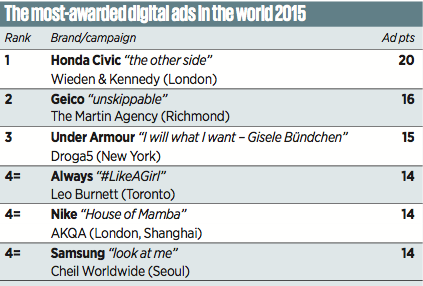 Of the top 30 Most Awarded Digital ads in the World, six are from the US. Of the 50 Most Awarded Commercials in the World, the US scored high with 10. The highest ranked Print/Out of Home work from the US was Apple iPhone 6 "World Gallery" campaign by TBWA\Media Arts Lab (Los Angeles), which tied for 8th place. A further two ads from the US made it into the top 50. And in the All Gunns Blazing top 50 table, eight hail from the US, with Allstate Insurance "Social Savvy Burglar" by Leo Burnett (Chicago) the highest ranked at #10 (a tie with a spot from ANZ Bank by Whybin/TBWA Group Melbourne).

In the Most Awarded Production Companies category, the top spot goes to Smuggler, with offices in Los Angeles, New York and London. USA’s Jim Jenkins, Jun Diaz and Lauren Greenfield ranked high in the Most Awarded Directors table.

Overall, taking the crowning glory among the Top 10 Campaigns Across All Gunn Report Media categories is the highly applauded Always #LikeAGirl by Leo Burnett (Toronto), which also takes #1 position in the All Gunns Blazing table, #4 Most Awarded Commercial in the World and #4 Most Awarded Digital ad (a three-way tie with Nike and Samsung) – a truly brilliant performance.

The superb ZDK "Nazis Against Nazis — Most Involuntary Charity Walk," by GGH Lowe / Grabarz & Partner (Hamburg) achieved #3 in the Top 10 Campaigns across all Gunn Report media categories, as well as #2 in the All Gunns Blazing table. 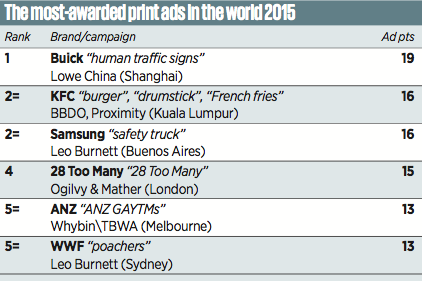 The car category continues to lead the way in the Most Awarded Advertisers table with Volkswagen taking top spot for the 12th year in The Gunn Report’s 17-year history (despite the company’s troubles in the latter part of 2015). Samsung, which comes in at 2nd place (up from #17 in 2014), and Nike, in at #3 (up from #10), have both bounced back.

In the Agency Network table, BBDO achieved its 10th win in 10 straight years (252 points) — an exceptional display of consistency and excellence. Leo Burnett was not far behind in 2nd place, with its highest points total ever (236). Notably, Leo Burnett has been the most awarded network for seven out of eight in the All Gunns Blazing league table. DDB take 3rd position and Ogilvy & Mather 4th. which means the top four have now been the same — not quite in the same order — for seven straight years. Significant moves up the Network table include McCann, now in at #5 (#9 in 2014), Mullen Lowe & Partners at #8 (up from #11) and Grey, now at #9 (up from #16).

Notable moves up the Most Awarded Agencies table in 2015 include Leo Burnett (Toronto), Leo Burnett (Buenos Aires) and Wieden+Kennedy (London).

All in all, 2015 will go down as a very good year, with loads of wonderful new work, particularly in All Gunns Blazing and Out of Home. A healthy mixture of consistency — with previous winners proving their greatness again — and surprises — with new and future stars making their moves up the tables.

To view The Gunn Report in full, subscribe now to www.gunnreport.com.

Q&A: Alex Leikikh on a year as MullenLowe CEO, his surprising CSO hire and that damn octopus

Hitting the right notes at the big game

Report sizes up the evolution of industry mega-deals