Growth of 5.2% is 0.2 percentage points up on previous forecast.

Advertising expenditure in the UK grew 5.2% in 2019 to £24.8bn, according to the lastest Advertising Association/Warc Expenditure Report.

The estimated growth rate is 0.2 percentage points better than in the last forecast, from October, and reflects even stronger growth than previously forecast from most of the best-performing sectors.

The AA/Warc are now projecting adspend growth in 2020 of 5.2% to £26.1bn. They are expecting another strong year from all of this year's top performers except cinema, which is forecast to decline by 6.3%. 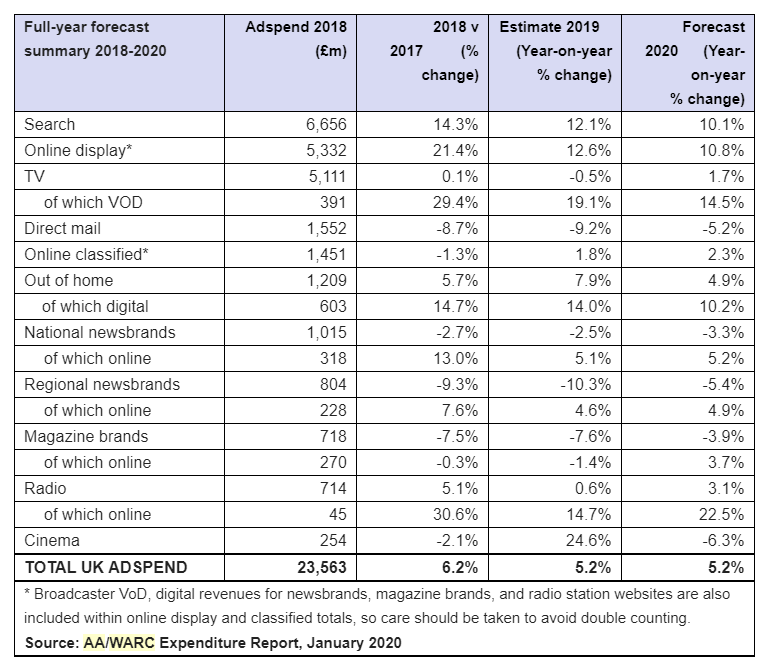 Another quarter of growth

The report also contained final data for July to September 2019, in which adspend grew 5.6% year on year, 0.8 percentage points above forecasts, marking the 25th consecutive quarter of growth.

The growth has been driven by spend on digital out of home, which rose 17.1%, TV video on demand, which increased 16.7%, and national online newsbrands, which experienced a growth of 6.5%. Cinema also enjoyed a boost with a 46.5% increase in adspend. 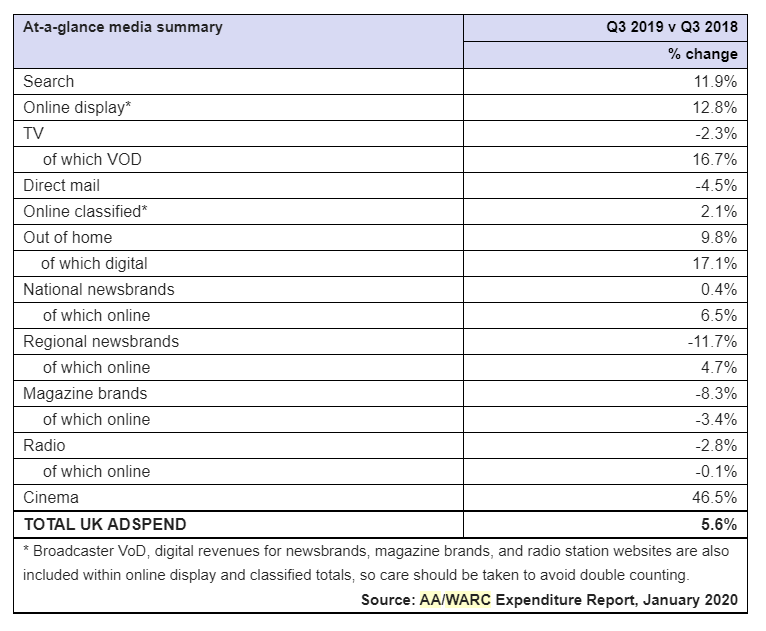 Stephen Woodford, chief executive at the Advertising Association, said: "These media spend figures are particularly impressive given this was a period of Brexit and political uncertainty and very low overall economic growth.

"As the Credos report on UK digital advertising showed, this is in part fuelled by the exceptional growth in SME spend in digital, as well as larger advertisers continuing to move budgets into digital formats in most media sectors."

He continued: "The projected growth for 2020 shows these trends continuing. Industry’s focus now turns to the future relationship with the EU and the importance of this to the overall health of the economy, which underpins this media spend growth."

The shift of revenue in traditional channels to their digital counterparts, such as video-on-demand and digital out of home, should be welcomed by advertisers, David Fletcher, chief data officer at Wavemaker UK, said.

"These will fuel further investment in the consumer experience as well as more addressability at scale," he said. "The latest phase of BARB’s Project Dovetail provides another layer of actionable data drawing attention to the availability of audience to VOD."

Also interesting, he added, "is the dramatic rise of SME adoption of advertising as an engine of growth. This is not only clear proof of the vibrancy of the advertising industry but also an indication of the broader health of ‘UK ltd’.

"A similarity between SMEs and the larger scale ‘digital endemic’ businesses (those whose consumer interface exists exclusively online) is the inherent digital bias of their investments. As these businesses expand and mature, so does their profile in expenditure towards a more plural mix."

But Fletcher added a note of caution: "Advertisers should be wary of too literally translating macro trends into direct behaviour shifts. These numbers show as much about the changing shape of our economy as they do advertising per se. And we know from our own Wavemaker analysis that there can be very significant category differences that are far from – and cannot be compared to – the ‘average’."

Social media adspend to hit $112bn even though it 'stumps' marketers

Brands tipped to leave broadcast TV out in the cold