Will the general election be won and lost online? Let's take a look at how political parties are using social media and the likely effect of the advertising.

After each of the shock election results of the past four years, pundits have pointed to social media strategy as a reason for the upset. Online political advertising has been said to have played a major part in David Cameron’s unexpected majority in 2015, Vote Leave’s Brexit surprise, Donald Trump’s triumph in 2016 and Jeremy Corbyn’s comeback in 2017.

Political parties clearly believe it will be a decisive factor this time, too, as they have all invested record amounts of human and financial resource to support their social media efforts.

Despite expert opinion and the willingness of parties to invest in social media advertising, there is a common perspective that questions the impact that Facebook advertising can have on changing the way significant numbers of people vote.

It’s a reasonable opinion and it isn’t an easy one to robustly rebut.

Yes, there are soft metrics for effectiveness that campaigns can point to; reach, engagements, shares and email sign-ups, to name a few.

But such is the pervasive nature of social media in today’s campaigns that the only way to categorically prove its effect on the end result would be to get one of the mainstream parties to agree to abstain from campaigning on social networks completely; a comparison of the polls at the beginning and end of the election would enable an understanding of the impact.

Such an experiment was conducted by social scientists in a local council election in the pre-digital era in order to prove the efficacy of the "ground war", which in the 1970s meant door knocks and leaflet drops.

Two researchers, David Denver and John Bochel, chose two identical tower blocks in Dundee. They were equidistant from the polling station in a safe Labour ward and Labour was the only local party that campaigned on the ground. Labour agreed with the researchers that it would only campaign in the "experimental" block and would refrain from campaigning in the "control" block, bar a single leaflet.

Social media is now used heavily to help achieve the objectives of the "ground war". But the remit of social media advertising extends much further and so the likely effect it has on the overall result is almost certainly significantly higher.

A detailed look at the thousands of social media ads over the past month shows that online political advertising is now employed to help achieve all of a campaign’s political marketing objectives.

If a political party can positively impact the information that voters use to make their decision about who to vote for, it will improve its chances of winning more votes.

In the pre-social media era, this was primarily achieved by having excellent PR operatives who could influence the nature of journalistic coverage of elections through a combination of good relationships, creative ideas for stories and clever framing of arguments.

It would be a good day’s work if a spin doctor could get some of their side’s key messages on TV news bulletins or encourage negative coverage of their opponents in the press.

This is still very much the case. The top two sources that people use for news remain BBC One and ITV – a respective 58% and 40% of people say they use it as a way of staying informed about current affairs.  Newspaper brands also still have huge influence; in the course of a month, more than 20 million people read The Guardian in some form.

But achieving mainstream media coverage via direct relationships with journalists is no longer enough to steer the narrative.

Journalists are increasingly using social media as a source for their reporting. The big debates on Twitter are useful fodder for writing articles and TV news bulletins; different perspectives on issues are (and always have been) the basis for much journalism. One thing that Twitter does not lack is opinions.

Therefore, one tactic for success in the "air war" is posting content that is likely to start a spat on Twitter, as it will ensure your side of the story gets an airing.

We have seen this deployed effectively by the Conservatives, with their deliberately badly designed "boomer memes" (see above), unrepentant attitude to accusations of doctoring news footage and mischievous rebranding of their press office Twitter account to "@factcheckuk" during the first leaders’ debate.

A provocative poster used to be a common way to achieve this aim, but we haven’t yet seen billboards deployed to deliver this objective; it seems as if social media hijinks have usurped the role of good ol’ paper and paste in this regard.

Another less controversial but equally useful tactic is for a political party to simply make sure that all the journalists following the organisation online are fed a steady stream of persuasive perspectives.

Political parties in the pre-social media world would frequently put on press conferences to get their message out, but nowadays Twitter can play this role very effectively and much more conveniently.

The sort of content that is designed to shape coverage includes things such as a clip of the best bit of a speech, a graphic containing key manifesto pledges or fundraising updates to communicate the momentum behind your campaign. 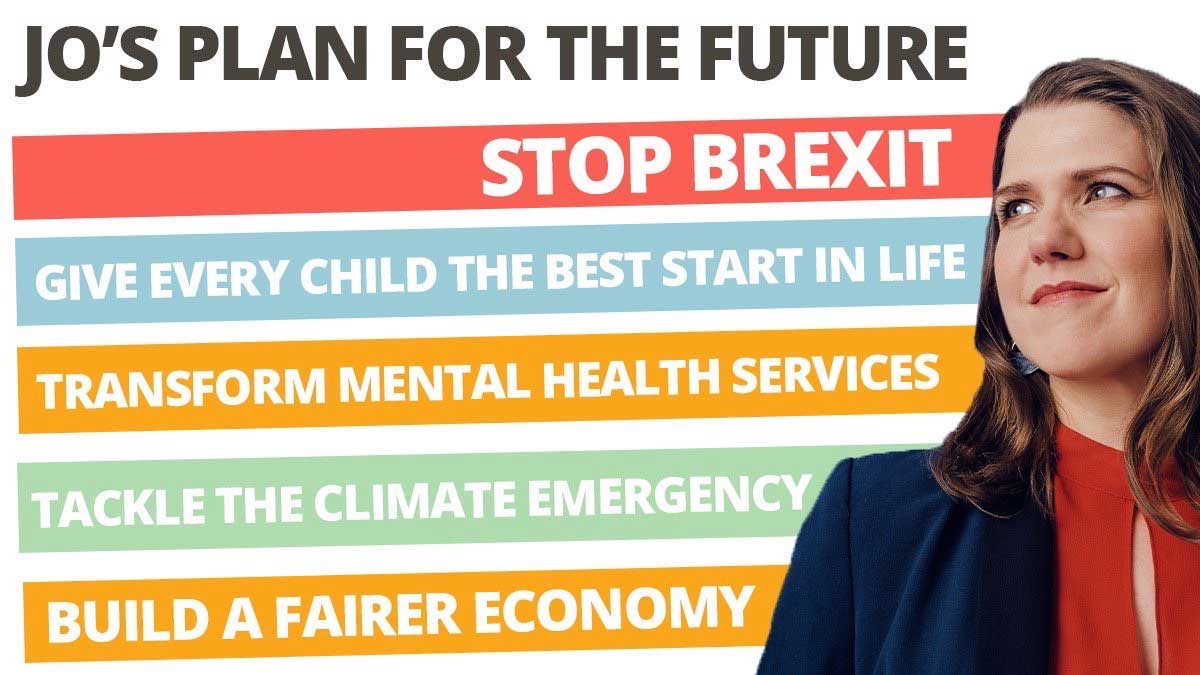 Facebook is the UK’s third most popular news source, with 35% of people saying they use it to stay informed about current affairs.

If a party is getting good coverage in the mainstream media but not gaining a decent share of news feeds in the 100 most important constituencies, the likelihood is it is missing out on a big chunk of voters who could decide the outcome of an election.

As one can’t control where organic content is seen and guaranteeing earned social media reach is impossible, political parties are using paid media to communicate their key messages on social networks.

The targeting for this sort of ad buy is specific in terms of geography but broad in terms of demographics and interests; this is because the more targeted your ads, the more expensive they are. If you’re keen to get your message in front of as many voters as possible in a given marginal seat, cheap inventory is good inventory.

The content of this advertising is designed to speak to undecided voters and features the issues most likely to be salient among people who might consider supporting you. No prizes for guessing the theme of the Conservative ads that have been running.

To win elections, political parties need people to knock on doors, give money and share content with their friends. Facebook’s tools are particularly good at finding audiences with niche interests – for example, those who enjoy political activism.

Political parties use these social media tools to run advertising that encourages likely supporters to give their email address in support of a cause or receive information from the campaign.

Once a party has an email address, it uses a range of customer relationship management techniques to take the recruit on a journey that includes stop-offs at "Share this video to your neighbourhood Facebook group", "Give just £5 towards our next leaflet print run" and "Volunteer to canvass your local community". 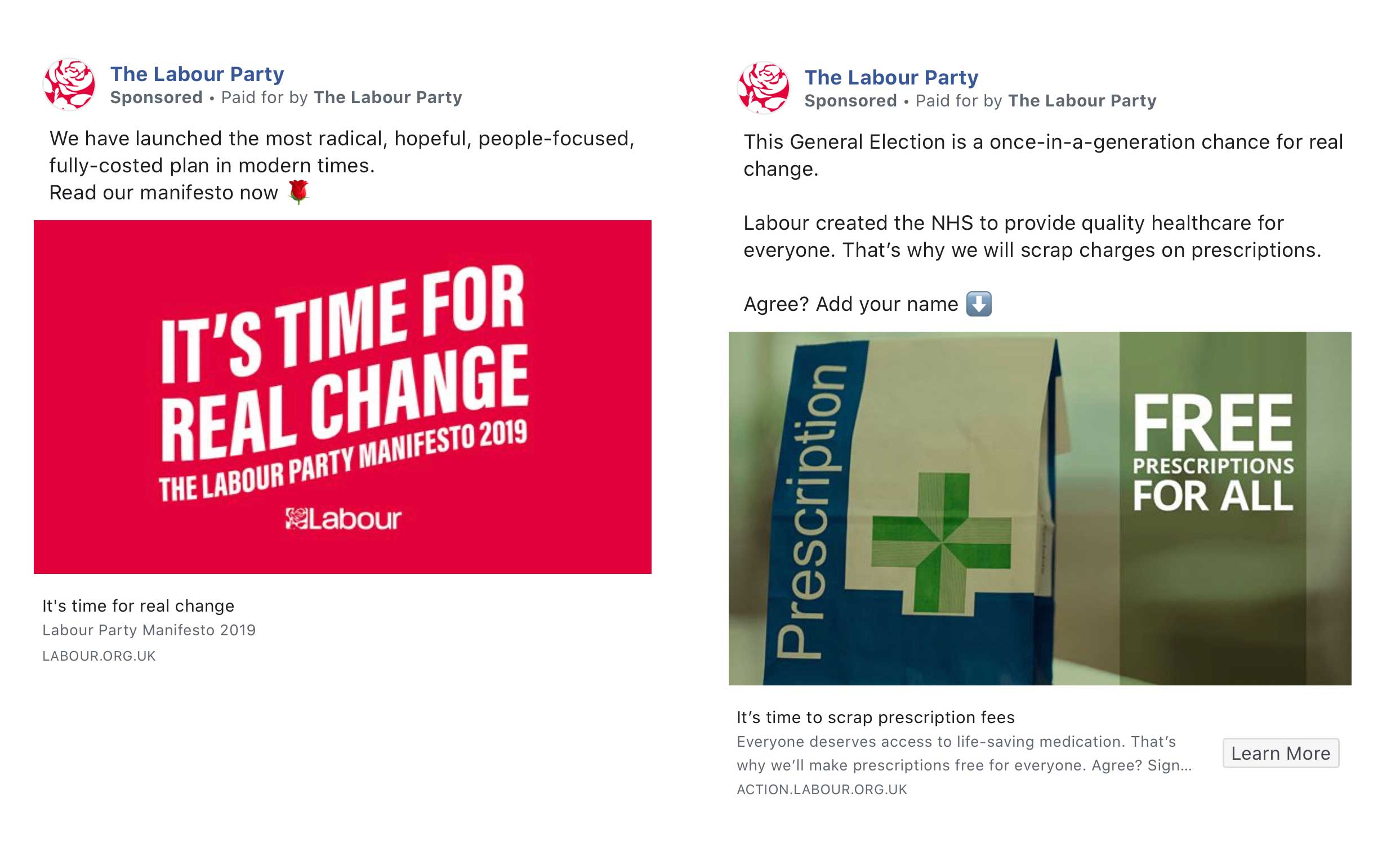 Philip Gould pioneered the use of focus groups for the purpose of electoral advantage; the market research technique helped Tony Blair understand what might motivate potential voters and contributed to a historic landslide victory at the 1997 general election.

However, to run regular voter testing in every target seat would have been too expensive and time-consuming, even for New Labour in its pomp. Social media advertising is now being used to do exactly that.

Political parties test the efficacy of various messages, the appeal of different images and the likelihood of disparate groups to support a party; this is all at the fraction of the cost and time than if they had recruited and conducted the research in real life.

Towards the start of the official campaign, the Liberal Democrats tested 14 photos of Jo Swinson to decide which was most engaging. 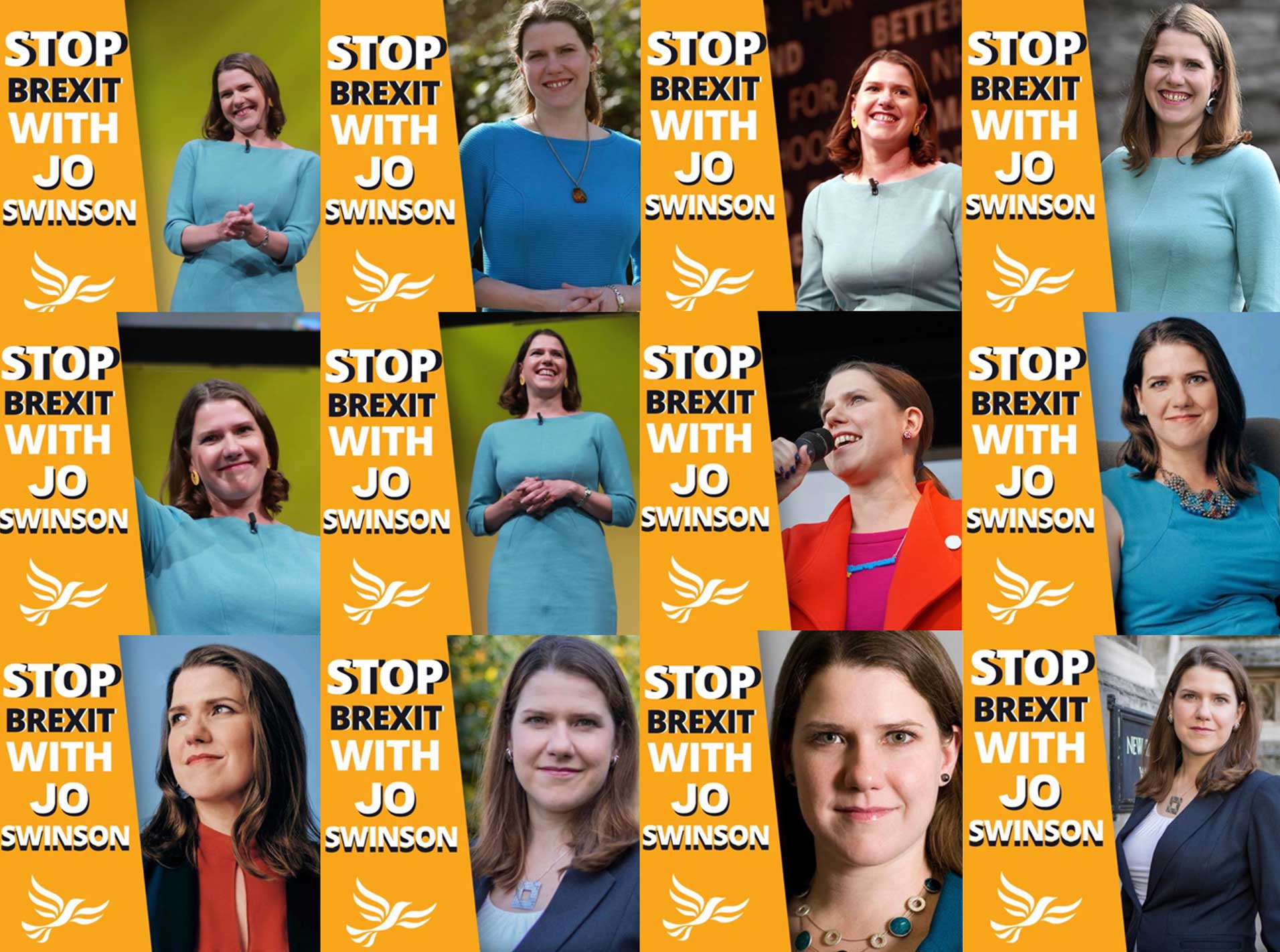 Objective 5: register voters and get out the vote

It might sound obvious, but elections are won by getting a greater share of those who vote to vote for your side.

If you encourage the wrong sort of people to register to vote, or you encourage voters likely to support the other side to turn out, you are making your chances of winning smaller.

The targeting tools available on social platforms enable political parties to communicate only with groups of people who have a higher propensity to be on side.

Labour is disproportionately popular among groups of voters who are less likely to be registered to vote – for example, the young and those who live in rented accommodation – and so it has been running a big voter registration drive.

In the days leading up to polling day, it will be able to retarget people who have engaged with its voter registration ads, along with anyone else who has given an email address to the party, with messages to get out to vote. 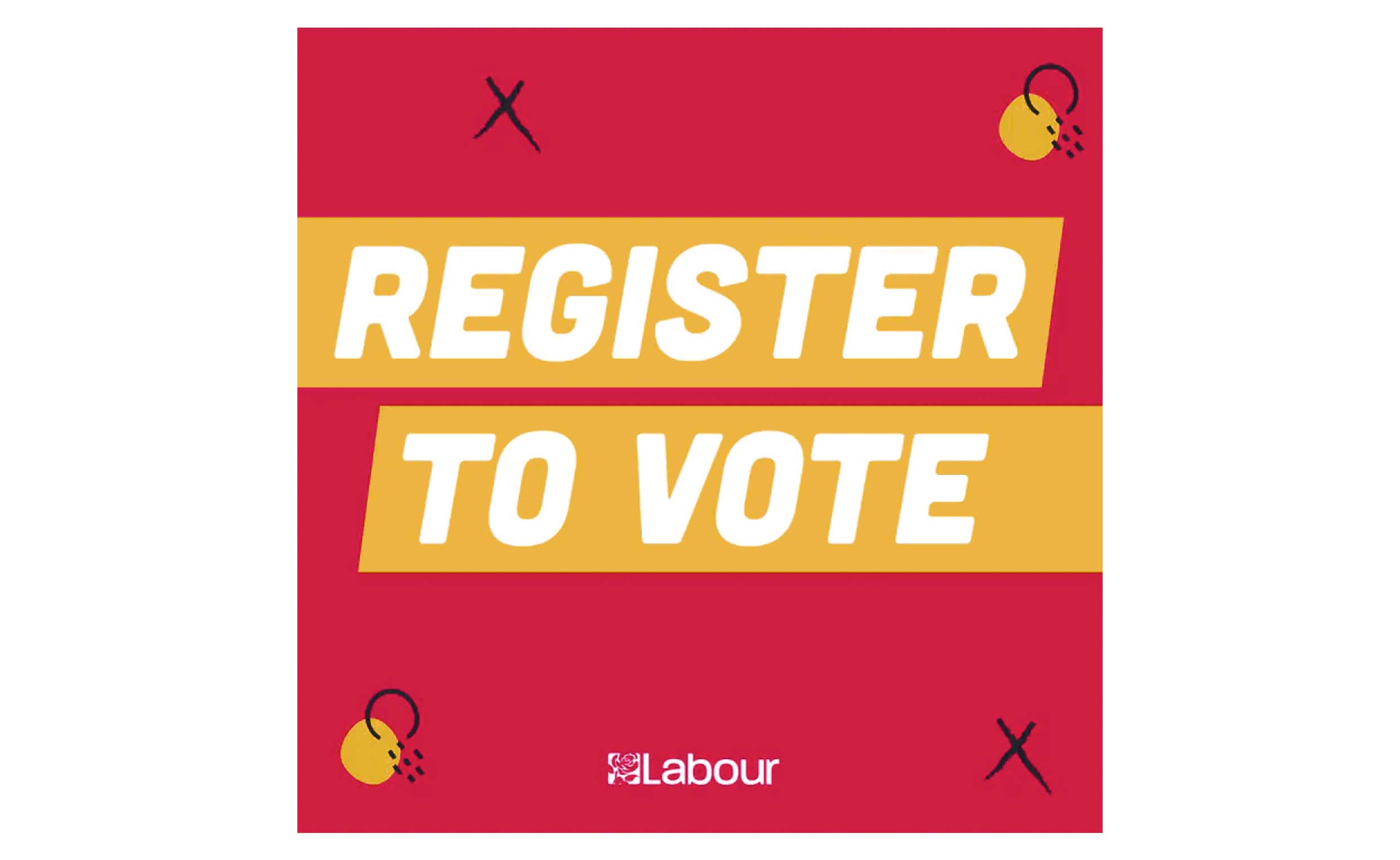 Given the speed at which the polls have shifted since the dissolution of parliament, the emphasis placed by parties on social media and the scale of the advertising campaigns, it would take a particularly sceptic mind to believe that what’s happening in news feeds around Britain isn’t going to have an impact on the result of the general election.

Which is why, even in Dundee, there isn’t a party that would consider abandoning its social media accounts in a selfless sacrifice at the altar of social science.

Why more regulation on social media offers opportunities for brands

Twitter will not suspend Tories for posing as neutral fact-checkers