Six Weeks
The duration of the tournament, which for UK-based sponsors, will start to feel a long time if England get knocked out early.

28-25
Wales beat England – meaning that much hinges on the next England game. If the hosts go out, so will much of the marketing buzz. On the upside*, England’s possible exit has added some jeopardy to the usually boring group stages of a major sports tournament.
*This is not much of an upside.

£387 million
One of several entirely made up figures the media will use to quantify the marketing cost of an England exit. Numbers add a whiff of scientific rigour to the story and are adored by headline writers. A general rule of thumb: these numbers are never correct.

2nd
Australia sponsor Skins are spreading the risk and playing the underdog card, calling on Aussie fans to support a second team, using #myotherTEAM. How many UK brands have got this in the locker should England go out early?

Three
As in ‘The 2015 Rugby World Cup 2015 is the 3rd biggest sports event in the world’. This is a phrase that is much fought over by sports rights holders at the rung below IOC and Fifa in the market for major event sponsorship. They use myriad criteria to create a case for their events global popularity, which in turn ups the price point of the official partner categories. See also the obligatory ‘global audience of 4billion people'.

460,000
The total number of visitors expected to travel to England and Cardiff for the Rugby World Cup. Despite the over claims with regards to media numbers, there is plenty of evidence that rugby is popular across social groups, and becoming more so.

85,000
The number of people who attended Ireland v Romania at Wembley for a group stage game. IRELAND V ROMANIA!

116%
The percentage increase in social mentions for Rugby World Cup, according to Adobe’s Tracking Index, from 4 July to the start of the tournament. 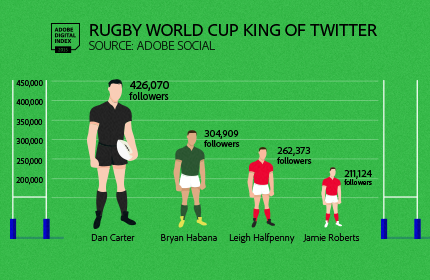 6/10
Of the ten highest paid rugby players at this tournament, six don’t have Facebook pages. The general consensus is that the players need to up their social game to make them more valuable as sponsorship properties.

500
The distance in metres of Heineken’s exclusion zone around venues.

1.5%
The Heineken brand’s share of the global lager market.

360 degrees
We’re in the early stages of using virtual reality and the hope is that we get to the next stage quickly. The new rule of marketing appears to be: don’t worry about the story, just use Occulus Rift or Google Cardboard. It’s great when you wear one, but looks deeply silly when someone else does.

50%
Increase in sponsorship revenue generated for the tournament rights holder compared to the 2011 RWC in New Zealand. 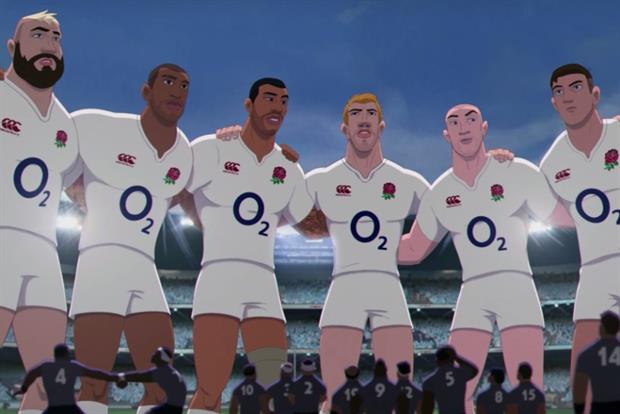 20
The number of years O2 have been on the England shirt. Buy the rights and stay there. The rest is jam.

25
The years Qantas has been supporting Australia’s rugby team. See above. 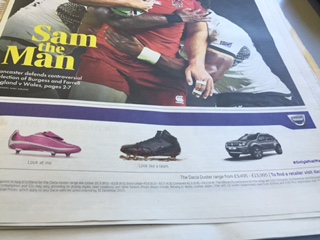 One
The number of good ideas Dacia’s creative team has conjured up at this event. And that was nicked from Adidas.

Zero
Number of times someone in the Twickenham car park says, ‘Blimey, you can’t move for Dacias in here’.

1,000,000
The number of rugby players in USA, including 900 college teams. America is ranked 15th in the world at this World Cup. They are ripe for a major US brand to become synonymous with a nascent sport. Two thirds of the American team first played the game in high school. A key indicator of grassroots growth, up from less than half four years ago. The Americans are coming.

One
Ad blocking software has shot to prominence with the arrival of Apple's iOS 9. This is deeply significant to the future growth of sport sponsorship. The world’s consumers have made it clear that given the opportunity, they will seek to avoid being interrupted by commercial messages. Like all top sports, Rugby World Cup is awash with brands, most of which can’t be avoided or blocked by technology. Whether that is the way to their hearts is a whole different question.