The vote to overturn FCC regulations may not be as good for marketers as you think.

On Tuesday, the Republican-led US House of Representatives voted to overturn the Federal Communications Commission’s internet privacy rules. If the bill is signed by Trump, internet service providers won’t have to ask permission from users to obtain their online data and sell it to third parties.

The news was celebrated by advertising trade groups that have been lobbying to repeal the Obama administration’s rules working to protect consumer data since October 2016. After all, there will be more access to user data, leading to the creation of far more relevant and targeted ads.

"This is an important victory for all who benefit from the data-driven marketing economy, including tens of thousands of businesses and nonprofit organizations and hundreds of millions of consumers," said Emmett O’Keefe, senior vice president of Data and Marketing Association in a statement.

However, what may seem like a lucky break has three potential downsides.

State laws could make marketing messier
In a direct response to the House, Minnesota senators voted on Thursday to add state-level broadband privacy laws with a new bill. If signed into law, ISPs will be required to obtain "express written approval from the customer." Illinois is also working on a similar bill. On Thursday, the state had a committee hearing about the adoption of the "Right to Know Act" which allows consumers to find out what information is collected online and what businesses it is shared with.

More states will likely follow with their own measures. If they succeed in enforcing strict policies, advertisers won’t see much of the data they are hoping for. Without the federal privacy regulations in place, states are the final defense to protect their citizens from data collectors. And, like every issue at the state level, results will vary from state to state and that could burden ISPs and advertisers with a dizzying range of regulations, legal fees and costs.

Jeff Chester, executive director at the Center for Digital Democracy, said he’s never seen as many organizations and political leaders come together to tackle online privacy issues. "Not only is there the makings of a much more powerful coalition," he said, "but a real determination to put privacy on the top of the public agenda."

Consumer distrust will increase
Only 4 percent of Americans think the marketing industry behaves with integrity, according to a 2015 study by the 4A's. Abolishing the privacy rules will only lead to more consumer distrust. "It could erode trust in marketing overall," said Robert Glazer, founder of Massachusetts-based performance marketing agency Acceleration Partners.

Marketers and advertisers agree that more transparency in needed, but the role the industry played in terminating the FCC rules questions the commitment to that goal. "Transparency is the most important word discussed in marketing today," said Glazer. "This doesn’t help that cause in any way."

The industry deserves a "black eye," added Chester, because the ANA, the 4A's and the IAB all led an attack on privacy, which he calls a "fundamental right." "The ad lobby is basically now the real enemy of the people," said Chester. "It’s now an obstacle to freedom, despite the fact that they claim they represent the free flow of ideas."

The ANA, which has opposed the privacy laws since they were enacted in October, said the regulations are "harmful for business and the public."

People will protect themselves with VPNs
Consumers are actively seeking out ways to protect their online data. VPNs has been a popular search term the last few days. According to Google Trends, the search term "vpn privacy" spiked at 5:08 pm on Tuesday when the overturn vote was cast. 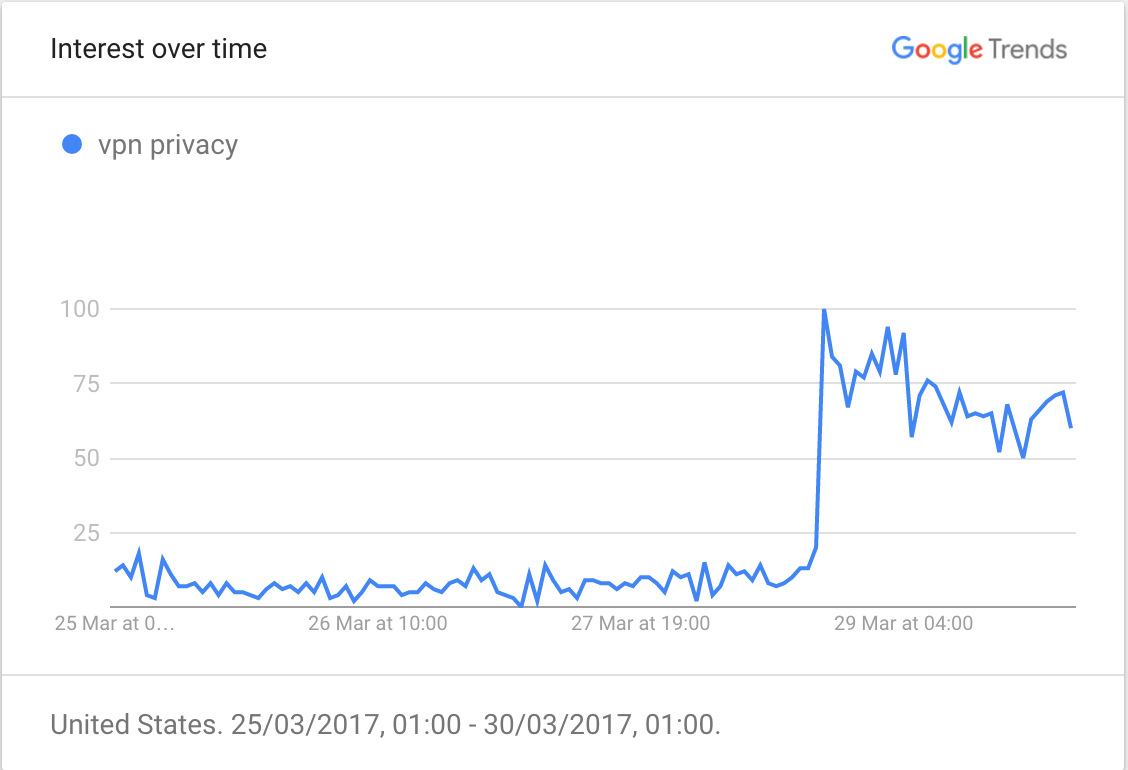 A large number of articles published about the threat the repeal poses to privacy has only increased the fervor. Take Thrillist’s piece called "Internet Providers Are Now Allowed to Sell Your Private Info. Here’s How to Stop Them" or Gizmodo’s "How to Hide Your Browsing History From Your Snooping ISP." These articles are informing users to download VPNs, saying that they are the most effective way to protect their data online.

VPN provider NordVPN said inquiries about its product surged by 86 percent in the days following the vote. "Whenever a government announces an increase in surveillance, people turn to privacy tools," said Marty Kamden, NordVPN’s CMO. "We are worried about the global tendency to invade users’ privacy."

The brand is also seizing the opportunity to grow its customer base. On Thursday, the company advertised a special offer on social, warning "Don’t let your broadband provider exploit your private data."

Don't let your broadband provider exploit your private data. Protect yourself with 72% off a 2-year NordVPN plan: https://t.co/KjXxrULXHQ pic.twitter.com/DgRqF6feQl

Other VPN providers are also stepping up their communications. In the days leading up to the vote, VPN provider Private Internet Access published a full-page ad in the New York Times.

Private Internet Access, a VPN provider, takes out a full page ad in The New York Time calling out 50 senators. from pics

Why email is the common denominator for Zillow brands

What the Trump administration means for media and advertising

5 things marketers need to know about the new FCC rules

Bob Liodice urges CMOs to "take their industry back"