UX consultants from cxpartners broke down some common misconceptions at the CMA's Digital Breakfast event, Creating adaptable content for the mobile web.

Is it the year of mobile yet? Most likely, yes, as was last year and next year in all probability. So we're always interested in expanding our understanding of this ever-growing medium.

At the Content Market Association's Digital Breakfast on creating adaptable content for the mobile web, we were drawn to part of the Content strategy for mobile presentation, by UX consultants Neil Schwarz and Sophie Dennis of cxpartners.

They began by busting four myths about mobile, and finished with one truth. We think they'll be useful the next time you're discussing your mobile content marketing strategy.

Mobile myth 1: Mobile users are all on the go

The archetypal use case for mobile is the harried commuter, but that doesn't reflect the reality of mobile usage. According to the Harvard Business Review, 68% of consumer smartphone usage happens at home; and Google's Mobile Search Moments reckons 77% of mobile searches take place at home or work.

This graph, taken from comScore's 2013 UK Digital Future in Focus whitepaper, shows the share of browser-based page traffic by hour for desktop, smartphone and tablet platforms on 21 January 2013. 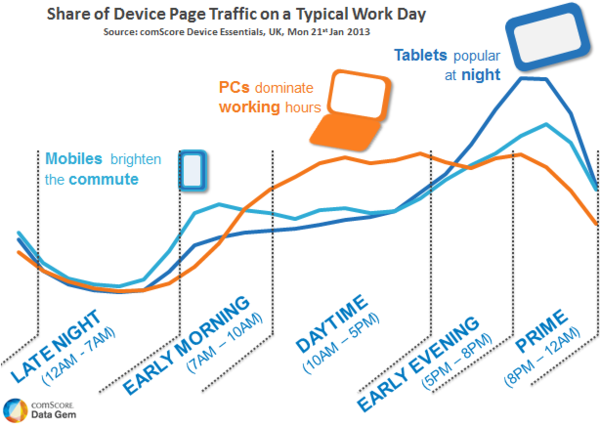 There is a spike of smartphone during the morning commute, but usage remains steady throughout the day and actually peaks after 8pm, when it is outperformed by its mobile cousin the tablet.

An Atlantic article in 2014 put paid to this idea. It cited a 6,000 word Buzzfeed article, which tracked 47% of its more than 1 million page views coming from mobile. "The immersive scroll is the oldest of mediums," quipped Buzzfeed's editor-in-chief Ben Smith.

Not in cxpartners' experience. After completing a responsive redesign for Thompson Sport, which sells premium holiday packages for sporting events, they registered an uptick in consumers booking these high value products through mobile, especially if they were at sporting events.

This March, BBC News launched a responsive site and reported that 65% of visitors are on mobile devices, including tablets. Cxpartners also cited analysis by the BBC of consumption, and while there was a correlation of visitors consuming different types of content on different days, and being attracted to punchy headlines during the day while consuming more long-form content on evenings and weekends, there was no correlation between types of content of device.

Truth: All users are task-focused, distracted and have no time for fluff and filler

Ain't that the truth.

The 4 digital content tricks marketers have up their sleeves

Why Google's Mobilegeddon should benefit users