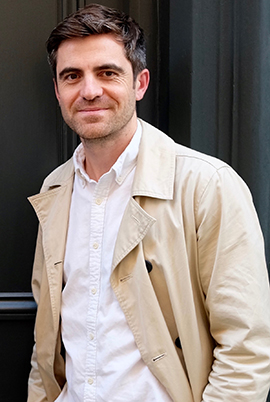 When I was a snotty-nosed junior at AMV, I got ticked off by a grown-up team for writing ‘TV ad’ instead of ‘television commercial’ in a script. In their eyes, it cheapened what we were doing. A nit-picky point at the time but something that stuck with me.

At their best, TV ads are television commercials, rising up the media laydown to sit comfortably as the highest form of advertising. Writing a great television commercial is a skill mastered over time. Bringing it to life is another bunch of learned skills. But it goes the other way too.

We convince ourselves we’re making a ‘film’. This usually turns out to be self-indulgent nonsense that forgets what it’s meant to be (until the client asks to see their product). Worth remembering what we do sits somewhere between chip paper and fine art.

So, TV ad, television commercial, or film? I think we’ve got a couple of good television commercials here. Taylors of Harrogate just pips Lotto to the post for me though being entertaining, well crafted, and informative. Indeed, why haven’t they stuck coffee in a tea bag before?

In this third instalment of McCain’s 'We Are Family' campaign, we’re shown a montage of domestic scenes illustrating the colourful diversity of British family life, embracing a myriad of different mindsets, faiths and outlooks – Leavers, Remainers, cat people, dog people, talkers, listeners. We may all be different but there’s so much we have in common too, not least our love of McCain’s oven chips. And whether you call it dinner, supper or tea, there’s no better time to come together.

In this poignantly observed domestic drama, a dad is outmanoeuvred by his pre-school daughter and we’re party to both his and her inner thoughts. It becomes clear that she’s able to read his mind with spooky accuracy, using this to her advantage in persuading him to take her for a Happy Meal. He might be deluding himself if he thinks he’ll make Dad of the Year – but he’s a winner anyway because he’s able to treat himself to a Big Mac too.

3. The National Lottery  'Calm before the storm'

We’re behind the scenes here at a National Lottery call centre as the clock ticks towards 7.45 pm and the conclusion of the big Lotto draw. There’s a moment or two of tense silence… then the phonelines light up and we see one of the operators, Michelle, happily able to confirm that the family she’s talking to has won £1.17 million. "How are you feeling," she asks – and we’re able to share their jubilation. After all, "Someone has to win. Why not you?"

4. Taylors of Harrogate 'Why didn't we think of them before?'

Coffee bags. Like tea bags but with coffee inside instead of tea. Obvious isn’t it? So why has no-one ever thought of it before? Well, maybe they have. Thus, in a cleverly scripted series of comedy vignettes, Taylors shows us how, thanks to a number of bizarre mishaps in the mists of history (involving boats and trains and balloon travel) the idea may have become lost in transit. But genius will out – and the campaign urges us to give them a try.

This stunningly choreographed spot (it screams special effects but was all shot "in camera") follows a woman dressed in vibrant Vodafone red as she dances through life, work and play, cinemas, restaurants and clubs, spinning off clones of herself. The analogy becomes clear – Vodafone is launching unlimited data plans, which will chime with those of us capable of unleashing unlimited versions of ourselves. The ad is a new departure for Vodafone, which is seeking to make itself more relevant to a younger audience.