Campaign throws on its thrusters, mixes its metaphors and points its telescope at some brands celebrating the 50th anniversary of the Apollo 11 moon landing.

It was 50 years ago on Saturday (20 July) that Neil Armstrong, followed closely by Buzz Aldrin, took his first steps on the moon as Nasa reached the apogee of the space race.

The achievement was lauded as not just a triumph for the US but for humanity itself, with 600 million people across the globe watching the event live.

Clearly, for many brands, celebrating this historic moment had as much pulling power as Newtonian physics. There’s quite a range on offer, from sober musings and serious societal reflections to piss-takes of some of those great intellects who have questioned whether the landings actually happened.

Nissan's 60-second TV ad by TBWA\G1 features a man in an astronaut suit skateboarding across a dusty, rocky landscape as a narrator recounts a "summer in the middle of the night, I'd just turned five and my parents had woken us up to watch television".

He continues: "Hard to believe, right? But not as hard to believe as what we saw. The strange shape of a man encased in a suit, bouncing around with little clouds of dust behind him… How did he manage to stay suspended in the air for so long and with such confidence?"

The action is intercut with that of the skateboarder, sans spacesuit, at the wheel of a Qashqai. "Technology is beautiful when it moves us," the endline states. "Nissan Qashqai with ProPilot technology."

The viewer is half-expecting the car to take off at the ad's climax. Somehow pleasingly (and uncheesily), it doesn't.

Also, Strauss' Blue Danube plays in the background. Of course, for sci-fi geeks the reference is obvious – it's in Stanley Kubrick's magnum opus, 2001: A Space Odyssey.

The film features images of Tesla cars, Musk's face, space rockets and Mars… but no moon.

"Space is not only a place where rockets and satellites fly," the voiceover intones. "Space is all around us. From the distance between the atoms we're made of to the gap making Mars so attracting."

As a rocket touches down on the Red Planet, Queen and David Bowie's Under Pressure plays.

"Don't we say Earth is our cradle?" the narration continues. "It is time to take our first steps. Let's become a multi-planetary species. Let's take this giant leap for mankind." Musk's signature then appears across the curvature of Mars.

The broadcaster has removed the blinkers from our tendency to look back at historic achievement with a sense of nostalgia untainted by reality with a promo film that parallels earthbound achievement with the moon landing.

Featuring imagery not just of Apollo 11, the film shows quick cuts of Trump and the collapse of glaciers due to global warming.

Then Apollo's stage-one ascent from the gantry is intercut with shots of disabled mountain climber Anoushé Husain. She says to the camera: "We choose to go to the moon… not because it is easy but because it is hard. Because that challenge is one we are willing to accept. We have had our failures, but so have others. All great actions come with great difficulties…"

Husain was born missing her right arm below the elbow. She lives with multiple health conditions and is a cancer survivor.

"50 years since we landed on the moon, Channel 4 salutes those that go beyond," the voiceover says.

Breaking tomorrow (21 July), the spot will air just before Channel 4's broadcast of the moon landing film at 8pm.

"We choose to go to the moon" was created by 4Creative, including creative director Eoin McLaughlin and director James Brown.

Little Dot Studios has also worked with Channel 4 and produced a six-day-long "live stream". Using the unedited audio feed between astronauts and mission control in Houston, it went live on 13 July at 2.31pm (50 years to the minute since lift-off) and is continuing for six days until the landing, ending on 21 July, when the astronauts left the moon's surface.

The audio interplay between Earth and space will be accompanied by Nasa footage and stills taken by Apollo 11, as well as graphics and reconstruction.

Here it is, live:

A musical interlude for you. Spotify is celebrating history with a list of 50 of the most-streamed tracks that feature the word "moon" in their titles, with Creedence Clearwater Revival's Bad Moon Rising at number one and REM's Man on the Moon at number five.

We get that Bowie's Space Oddity, or even Starman, don't qualify, but still their absence is felt. A minor consolation (although it's a less space-themed track) – Moonage Daydream gets number eight.

Spotify has also included a top 10 list of the US states most into stargazing. Vermont tops it. 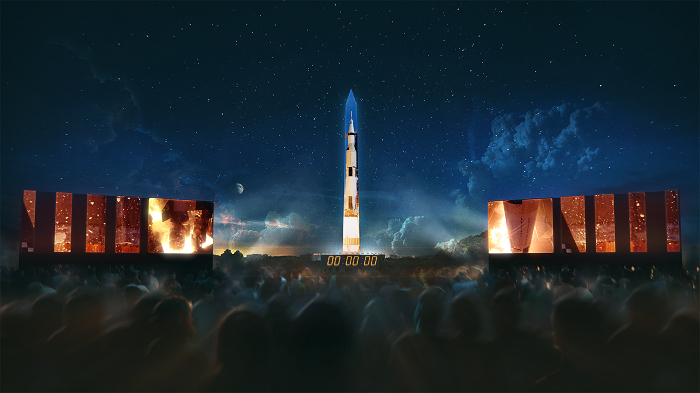 Over in the US, the Smithsonian National Air and Space Museum is projecting a 363-feet Saturn V rocket on to the Washington Monument between 16 and 18 July. On 20 July, the "Apollo 50: go for the moon" show will combine full-motion projection-mapping artwork on the monument and archival footage on screens recreating the Apollo launch.

The event is in partnership between the US Department of the Interior and 59 Productions.

Perhaps it will be convince Trump that the moon is indeed not "a part of Mars". 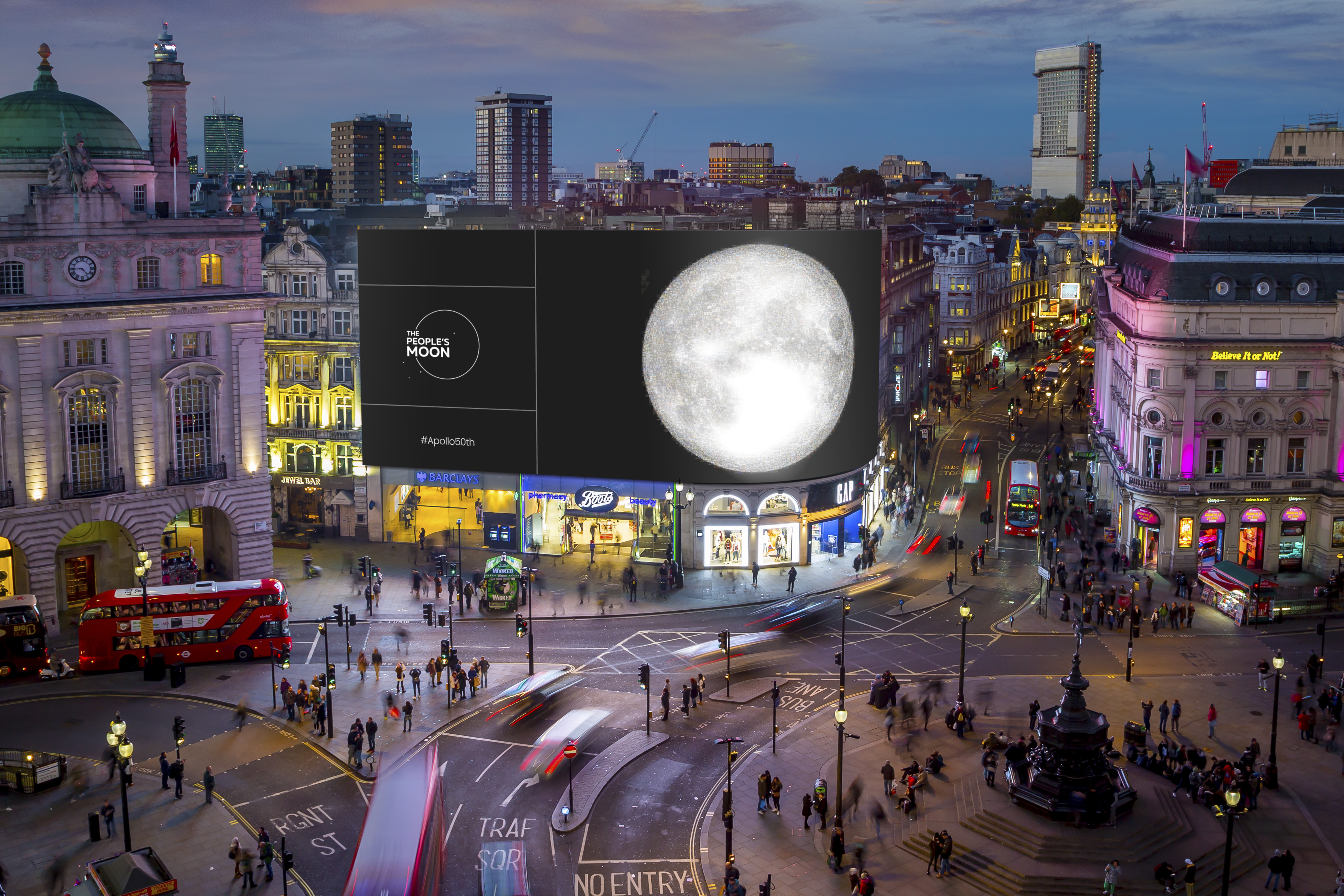 Ocean Outdoor and The People's Moon have joined forces to take over London's Piccadilly Lights site with a gigantic interactive installation.

This work taps into conspiracy silliness with a film that pokes fun at those who think the moon landing was faked.

"Moon landing 'exposed'" uses actual footage of the Apollo blast-off, before taking a swipe at the ridiculous conspiracy "theories" with a dramatic shift in tone.

"Humanity took to the stars," copy superimposed over the real footage reads. "And landed on the moon. Which definitely happened. But if it didn't…"

The film then cuts to some clearly faked green-screen shenanigans. "You could totally pull it off with Shutterstock," the copy says, as the accompanying musical score transitions from sober piano to quirky electronica.

The action then has astronauts tumbling through space, meme-like cats and dogs in spacesuits and an end shot of an astronaut "moonwalking" à la Michael Jackson. 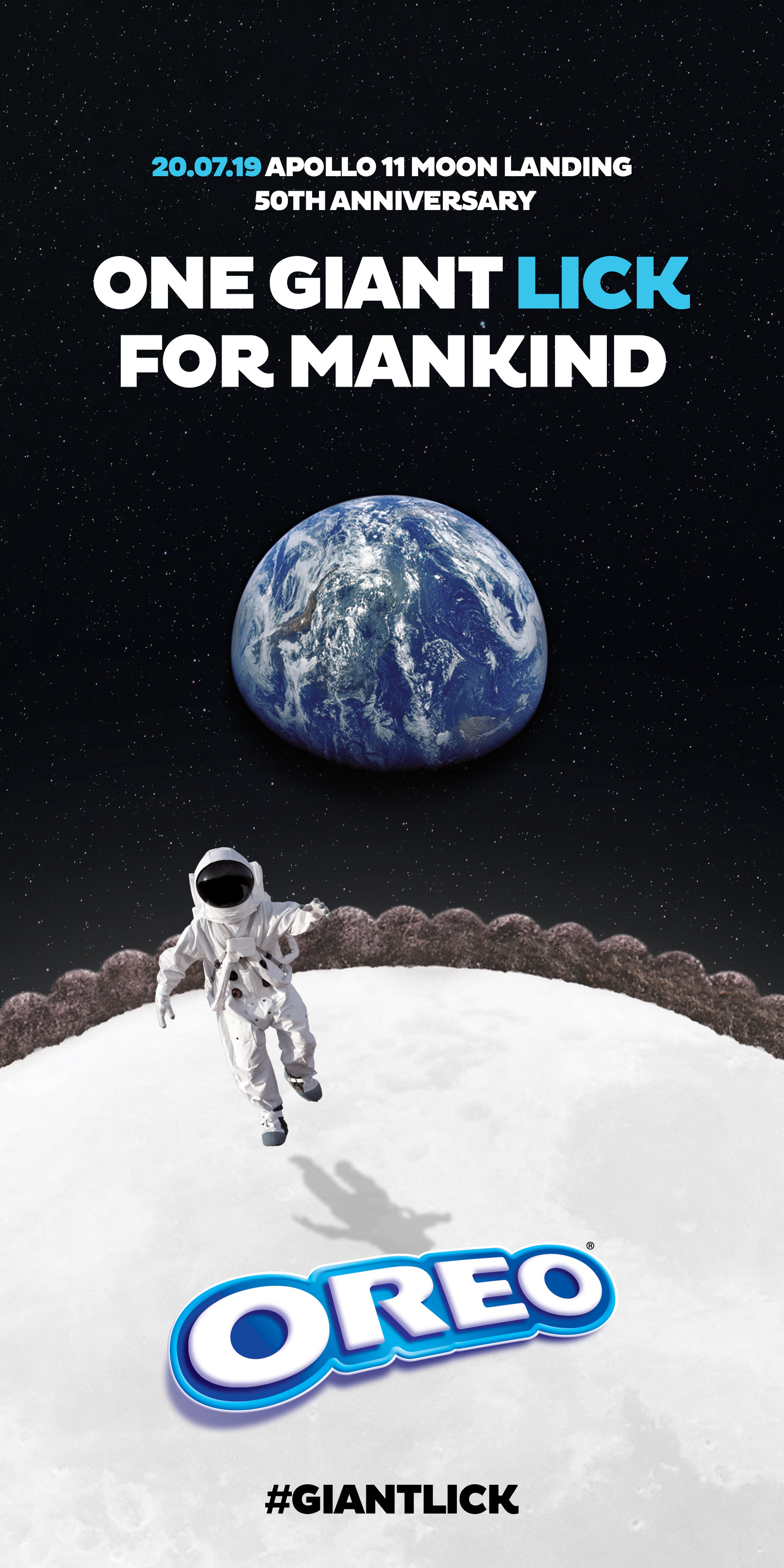 Twist off the chocolate biscuit outer of an Oreo and you're left with a circle of creme filling not dissimilar to the surface of the moon, right?

Well, that's the idea behind Oreo's "One giant lick for mankind", a creative execution appearing across London on 20 July, including at Westfield London and Westfield Stratford City, as well as on Oreo's Facebook and Instagram pages.

It was created by Golin, with media through Carat.