Lingerie brand Jane Pain isn't the only company to use optical illusions in their ads. We found more campaigns which have used visual trickery to catch consumers' eyes.

This week lingerie brand Jane Pain released a series of optical illusion ads, which appeared to be busts and bums covered by the brands products. The body parts were, in fact, elbows, knees and other perfectly innocent body parts.

The campaign was created by Saatchi & Saatchi-owned agency Conhill, and in the bottom right-hand corner of each image a small icon can be seen with the undressed body part and an explainer, such as: "It if can make your elbow look sexy, imagine what it can do in the right place".

It inspired us to find more examples of ads with cool optical illusions from brands such as Nokia, Ford and Honda.

We can confirm #TheDress is blue and black! We should know! http://t.co/qAeIIHzJxk pic.twitter.com/kkxjUbmgI3

Remember #TheDress? Roman Originals unintentional optical illusion became a worldwide hit earlier this year when a picture of one of its dresses popped up on Twitter and online users debated whether it was black and blue or white and gold.

2. Honda "an impossible made possible"

In October 2013, automotive brand Honda released this video, called "an impossible made possible", starring the company's CR-V 1.6 i-DTEC diesel model. Forced perspective and visual trickery was used to make it look like the car was being moved as someone blew on their coffee, among other concepts. 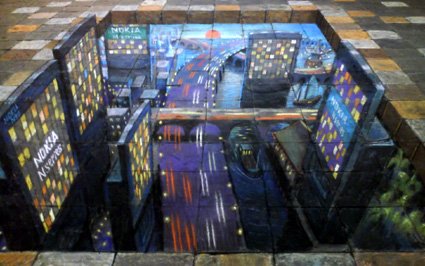 In 2007, British artist Julian Beever created a 3D artwork on behalf of Nokia in Singapore to promote the brand's new N-series phones. The 'Souls of Asia' piece took 36 hours to create and depicts the modern N-series models set against a mélange of traditional Asian settings. 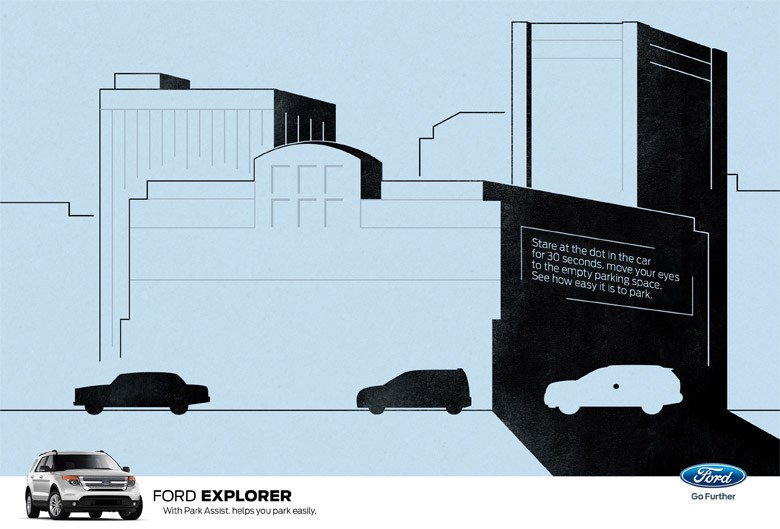 An ad created last year by BBR Saatchi & Saatchi on behalf of Ford to promote its Explorer SUV asked readers to stare at a black dot in the centre of a car for 30 seconds to then see it be parked in an empty space between two vehicles.

This almost two-minute video starring the music group was created to promote the Chinese furniture store Red Star Macalline back in March this year.

Optical illusions include one band member "sat" next to his fellow musician friends on a sofa, except they are actually a graphic of them on the floor and wall nearby.

6. Anar Foundation's 'Only For Children' ad

Created by Grey Spain, this outdoor ad used lenticular printing technology that allows adults to see one image, and children a different image based on their height and eyeline. This then allowed the charity to reach out to children under the age of ten, who were affected by child abuse, giving them a secret message and contact details for the brand.