Absolut recently announced Lebanon's Sarah Saroufim as the winner of a contest to find its next creative collaborator. Campaign went to the winners event in Stockholm to find out about the brand's philosophy of collaboration.

Absolut has long held an exalted place among businesses for its role in working with artists and promoting creative expression, and in May the Pernod Ricard vodka brand reached the end of a six-month contest involving more than 7,500 artists from 19 countries to find its next creative collaboration.

The winner was Sarah Saroufim from Lebanon, a recent graduate of graphic design and illustration from the American University of Beirut, whose work will be displayed at a " globally iconic" out-of-home advertising site. Saroufim also received a €20,000 cash prize.

Artists were invited to share their vision of a better tomorrow based on one of Absolut's five "brand beliefs", incorporating the Absolut bottle's silhouette into their work. Many of the entries can be seen here.

Saroufim's interpretation of "Everyone should be free to express themselves" was chosen by a jury of some of the world's leading creative voices, including previous Absolut collaborator Mickalen Thomas, Indian-based artist and curator Bose Krishnamachari and Aaron Cezar, founding director of London's Delfina Foundation.

Saroufim wanted her design to carry a message of a more open equal and inclusive world. She told Campaign: "The more we talk about mental illness, the closer we get to overcoming it. I expressed this idea using the pun ‘Don’t keep things bottled up’ and an overflow of expression symbolised by speech bubbles." 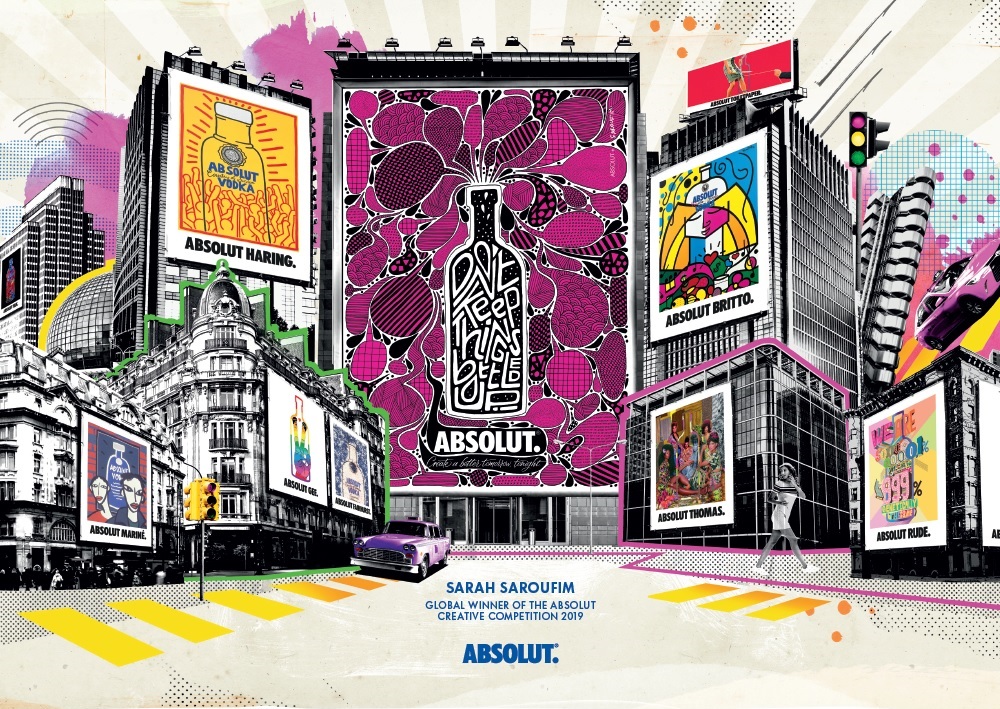 She will be following in footsteps of previous collaborators including Keith Haring, Romero Britto, Arman Fernandez and Maurizio Cattelan.

Frida Hyseus, global marketing manager at Absolut, credited the success of the brand's collaborative approach to the trust it places in its collaborators: "For us, we make sure we allow the artist artistic freedom. You’re not there to dictate, influence or tell them what to do.

"That’s something that we hold close to our hearts throughout the years that we’ve been working with artists; to really give them that carte blanche to do whatever they want. That way the end result becomes more authentic."

Thomas reflected on her previous collaborations with Absolut, saying: "It’s a great brand that believes in and allows creatives to bring forth their voice within the projects. Absolut has a long history of working with creatives, so there is a mutual respect for the creative process – not many brands understand that."

The best and worst of Pride brand activity: Hilton, Levi's, SodaStream and more

Absolut "The vodka with nothing to hide" by BBH London

Absolut "One night" by BBH London