The first quarter of 2020 was one of contrasts for Alphabet, the holding company for Google and YouTube. While numbers were dented by sweeping cuts to marketing budgets worldwide due to Covid-19, the group also benefited from hundreds of millions of people working and playing from home, with YouTube and Google Cloud's businesses bolstered by this new and unexpected user additions.

"Performance was strong during the first two months of the quarter, but then in March we experienced a significant slowdown in ad revenues," Alphabet chief financial officer Ruth Porat said in the results announcement. "We are sharpening our focus on executing more efficiently, while continuing to invest in our long-term opportunities." 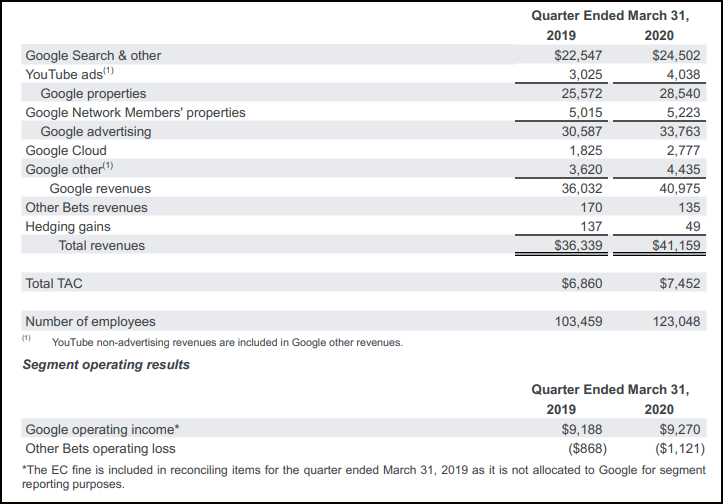 The rise and dramatic decline in the first quarter was visible in the results of Alphabet. For Google, $33.8bn of its quarterly revenue of $41.16bn came from advertising and growth was likely to be muted given the battered state of marketing budgets. However, Alphabet's numbers were buoyed by businesses such as Google Cloud and YouTube, which balanced out some of these losses. YouTube ad revenue increased 33.4% to $4.04bn from $3.03bn a year ago, while Google Cloud sales were up 52% to $2.78bn from $1.83bn.

Google, which accounts for the largest share of Alphabet's revenues, has already made changes to cope with the crippling effects of Covid-19. The company is reportedly slashing its marketing budget by half, according to some reports and Sundar Pichai, Alphabet's chief executive, said that other cuts would also be made. "We are focusing and recalibrating our investments in areas such as data centres and machines and non-business areas such as marketing and travel," he told analysts in a post-results call.

Overall, Alphabet and Google (which accounts for four-fifths of the holding company's revenue) posted results and commentary that were reflective of the current business sentiment. Revenue growth was 13% to $41.2bn in the first quarter of 2020 compared with 17% in the same period last year. Alphabet's income was $6.8bn during the three months. 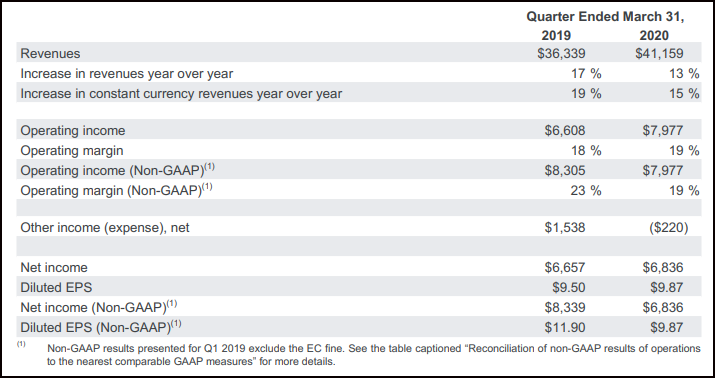 Away from the minutiae of these numbers, analysts and marketers will be keenly watching how Alphabet and specifically Google fares in the second quarter, with many forecasting a flat period – something the company has never posted. Pichai and the other management at Alphabet declined to provide any specific forecasts for the upcoming three months – when marketing budget cuts from its clients will likely start to pinch – and be reflected in results.

Porat admitted on the post-results call that while the company was seeing some very early signs of recovery in its advertising business, "it is not clear how durable or monetisable this will be". And, in a sign of looming troubles, she warned the marketing and advertising community of storms ahead.

She said: "As of today, we anticipate that the second quarter will be difficult for the advertising business… as the global economy normalises, this should reflect in our advertising revenue, but it will be premature to comment on timing, given all the variables here."

Google could cut marketing budget 'by half' this year

Google to force advertisers to prove their identity