All the signs point to a more diverse industry in our second-ever survey - more agencies took part this year, while comparisons for those that also participated in the inaugural survey showed improvement.

Read part two of the survey on ethnicity

In January 2016, Campaign and the IPA published their first diversity survey of the industry, which looked in detail at the gender and ethnic make-up of advertising’s biggest agencies. So began a year of diversity campaigns and a challenge to adland: act now to protect its future success.

For anyone who doubted there was a problem in the first place, the subsequent stories on three allegedly badly behaved men – Kevin Roberts at Saatchi & Saatchi, Gustavo Martinez at J Walter Thompson and Alexei Orlov at Rapp – highlighted why this drive for a more equal playing field is so important (Martinez and Orlov’s court cases were ongoing at the time of writing).

Agencies overwhelmingly welcomed the challenge, displaying new role models in ad campaigns, launching industry initiatives to change the status quo (some more valid than others) and, as the latest figures reveal, making genuine change on their home turf.

"In April, the UK government is planning to introduce compulsory gender-pay-gap reporting for companies with at least 250 employees"

Of course, there was some criticism. One reader wrote in to declare there were fewer women in creative departments because "they just aren’t good enough". Another argued that if the industry wanted to more accurately reflect society, then should it have targets on the number of obese staff as well? Indeed, the broader outlook on diversity now appears gloomier following a change in political agenda in 2016 that seemed to prize isolationism.

That said, as the results of Campaign and the IPA’s second diversity survey demonstrate over the following pages, there was progress in the industry last year.

This second survey is much larger than the first – 131 agencies were involved compared with 39 in 2016. The reason is that the IPA asked for diversity information as part of its wider census data collection, including smaller agencies in the sample. Last year, it only invited large agencies (those with a gross income of more than £20m or with more than 200 employees) to share their data.

While this larger sample size makes for a richer data source, it precludes easy comparison with last year. So instead of drawing comparisons from inconsistent data sets, we have isolated the agencies that submitted data for both years and have presented this as a separate box. The good news is that this looks positive.

For individual agency data, we have chosen to display the results of larger agencies because the absolute numbers in smaller agencies are easier to skew. Again, we want to stress that this is not intended to name and shame any specific company. It is an attempt to track the industry’s progress on the diversity issue and to build a proper picture of what adland looks like in 2017. Agencies have been listed alphabetically, not ranked. Campaign also appreciates that this sensitive data can be warped by one or two people and that diversity is not limited to just gender and ethnicity.

It is, however, disappointing to see that all Publicis Groupe agencies have only submitted data up to the end of 2015. Despite individual agencies supplying figures last year, the parent company said it will only supply data that has been reported to the group as part of a normal reporting period (the 12 months to 31 December 2015). Publicis Groupe said the 2016 data was externally audited and would not be available until February.

Publicis Groupe also said it was unable to provide data pertaining to salary (which is only displayed as an industry average) or ethnicity because it is not reported to the company. This is a shame given that other holding companies manage to produce such data. For a full statement, see the "small print" box.

In April, the UK government is planning to introduce compulsory gender-pay-gap reporting for companies with at least 250 employees. Businesses will have 12 months to comply. But, before that, let’s see where we are right now. 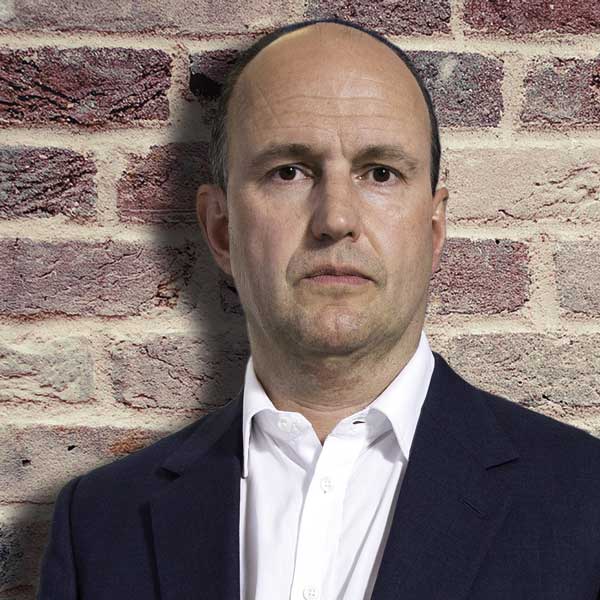 When I made diversity a key part of my "here for good" agenda, I didn’t realise that it would prove to be quite such a zeitgeist issue and I’m really pleased that it seems to have struck a chord among the industry.

The purpose of the survey and the public announcement of IPA targets for diversity was to provoke debate and get the subject firmly on to the agenda of all agencies.

Thanks to Campaign’s support (I am delighted that the diversity stats now form part of the School Reports) and the high levels of participation among member agencies, I think we have succeeded in that goal.

I wrote in these pages last year that there is no room for complacency and, as you will see, not all the numbers have moved in the right direction. But a word of caution is needed here when it comes to making year-on-year comparisons because the sample size has changed and grown considerably – which means that, in looking at 2015 and 2016, we are not comparing like for like.

Last year’s survey was effectively a pilot, in which we captured data from 39 member agencies with a gross income in excess of £20m or more than 200 employees. This year, we have responses from 131 agencies. This is split into 98 creative shops and 33 media ones, and includes 85 agencies with fewer than 200 employees or income below £20m.

This deeper level of engagement in the monitoring of diversity is in itself significant as it demonstrates that agencies are more than ever aware of the importance of this issue.

While the proportion of females in senior positions shows a strong upward trend for the long term (see bottom chart, opposite page), the 2015/2016 comparisons both for media and creative agencies show some declines.

The truth is that this sample is more representative and the data is more robust, so the starting point for the IPA’s target of 40% of senior positions being held by women by 2020 being currently 31% in creative agencies and 29% in media agencies is still a long way to go. I am confident this reflects the reality of where we are today.

The past two years have been about raising awareness and defining targets based on reliable benchmarks. But they have also been about the IPA providing practical help in changing processes.

I would urge all agency managers to check out the excellent diversity hub (www.ipa.co.uk/diversity) and encourage you to start using the tools and processes you’ll find there.

2016 will be remembered as a year when the issue of diversity rose to the top of the agenda. Now is the time for action and, thanks to this annual survey, we will all be publicly accountable for how we rise to the challenge of creating an industry with genuine gender equality throughout its ranks. 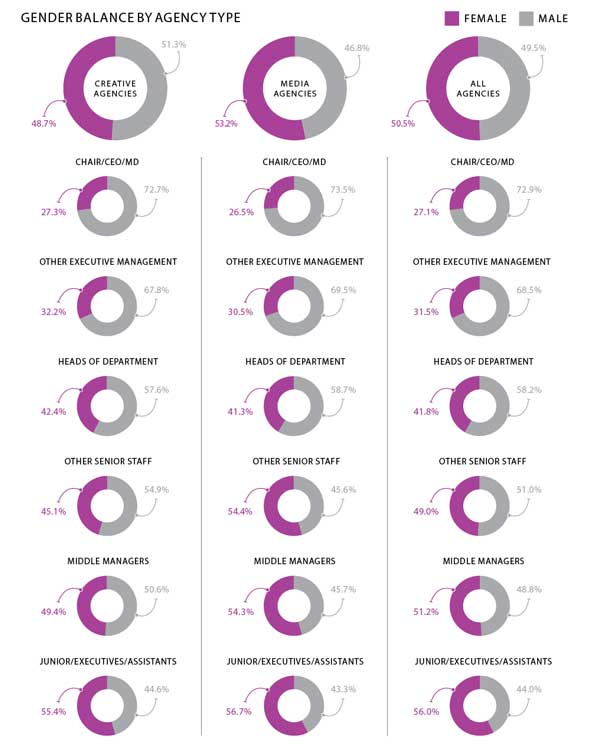 How many women are at the top?

Overall, the industry is almost balanced in terms of gender. Creative agencies have a slight bias towards men, driven by the creative department, while media agencies have more women.

According to IPA Census figures, this year’s overall percentage of women in the top two levels of seniority – 30.2% – is slightly lower than it was in the past two years. Within creative agencies, women make up 31% of the two most senior bands (the target is 40%).

This is broken down into 27.3% at the top level (chair/chief executive/managing director) and 32.2% at the next level (other executive management).

If you isolate the largest agencies, these figures become 31% in the top two tiers, with 29.9% at the top level and 31.6% at the next tier. At the smaller creative agencies, 24.4% of women hold top-tier roles and 32.6% the second tier. Below these two levels, women make up more than 40%.

At media agencies, women make up 28.5% of the top two tiers overall. This figure is being dragged down by the inclusion of smaller agencies in the sample. In larger ones, this figure is 31% (32.3% at the top level and 31.1% in the second tier). But within smaller media agencies, this falls to 21% in the top two levels, with women making up only 15.2% of the top-tier roles and 26.8% at the second level.

Nearly all (97%) creative and media agencies said they offered at least one out of 11 possible flexible working options listed in the survey.

Overall, creative agencies offered an average of 3.3 options each. The larger ones had a better record, offering an average of 5.1 options, while smaller shops had 2.6 options on average.

The most common flexible working options were part-time working and home-working. These were followed by flexi-time (where employees work core times but get flexibility outside of that), staggered hours (where staff have different start and finish times to cover longer opening hours), compressed hours (where employees work their total hours in fewer days) and job-sharing.

Less common were shift-working, term-time hours, annualised hours (where the hours an employee works are calculated over the whole year, with set shifts and reserve shifts that can be used according to workload) and the intriguingly named "self-rostering" (where a manager agrees resourcing levels and the employees decide among themselves how to collectively schedule their working days).

At media agencies, women were more likely to use flexible working options, but the difference was slightly less marked.

At the top level, the take-up of flexible working was actually higher among men than women.

Is there a pay gap? 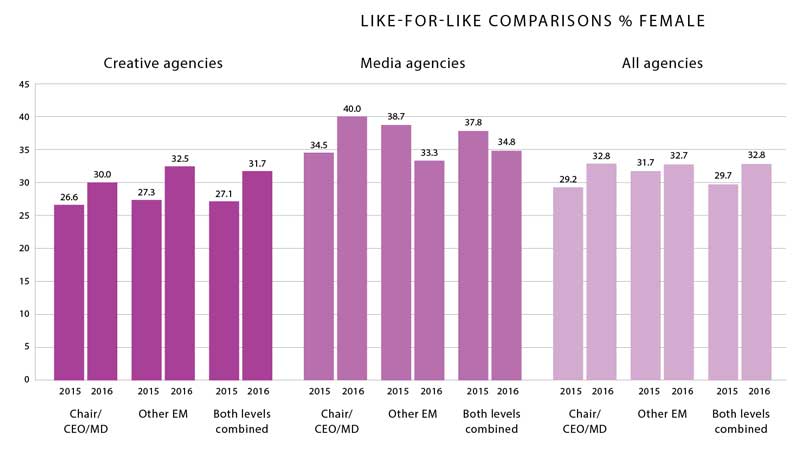 In order to give a proper comparison with last year’s figures, we have isolated the 30 large agencies that submitted data to both surveys. While this is a small sample, the outlook looks very positive. Overall, the percentage of women in a top-two-tier position has increased from 29.7% in last year’s survey to 32.8% in this year’s survey. 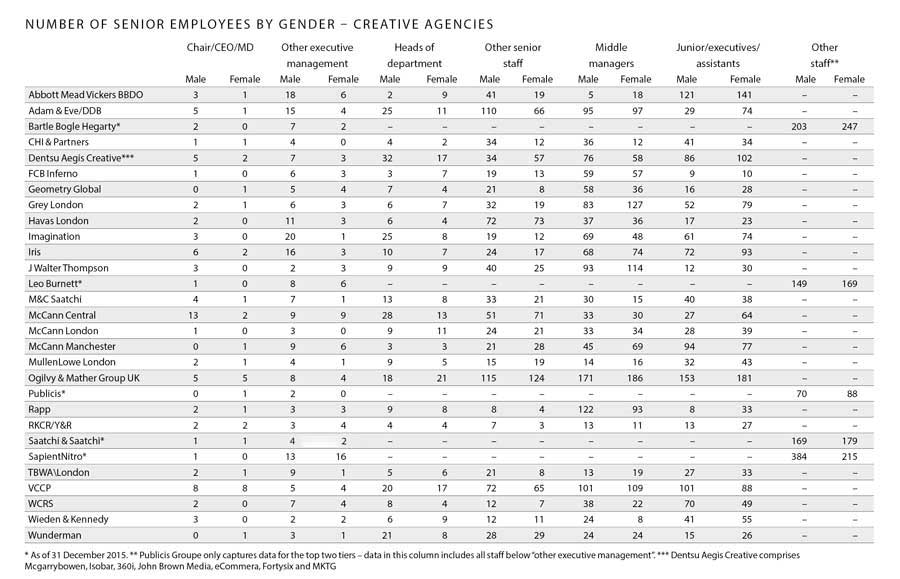 Two hundred and twenty-nine IPA member agencies were invited by email to respond to the survey. Fieldwork ran from the start of September to the start of December 2016. A total of 131 agencies submitted data. This was broken down into 98 creative agencies (68 small, 30 large) and 33 media agencies (17 small, 16 large). Large agencies are defined as those with more than 200 employees or gross income in excess of £20m. Small agencies are those with fewer than 200 employees or less than £20m in gross income.

Unfortunately, due to Publicis Groupe’s corporate rules, which governs the way in which the agencies collect and report data, at the time of the request Publicis Groupe could only provide diversity data as of 31 December 2015. This is because the data requested by the IPA is collated at the end of each calendar year and then reported at the beginning of the following year. Diversity data for 2016 will be available in February 2017.

Had the piece for Campaign been run at a later date, data for 2016 would have been available. In order to ensure that its diversity data is accurate, Publicis Groupe’s diversity data (which includes the data provided to the IPA) is externally audited."