While the IPA's annual diversity survey may suggest progress has been slower than hoped, the groundwork has been laid for the rate of change to start accelerating.

See how adland did in last year's diversity census

Here it is in black and white: how diverse we are as an industry regarding gender and ethnicity, whether our efforts in these areas are making a difference, and where more work needs to be done.

So, how are we looking? At first glance, the immediate reaction to these figures is that they aren’t where they should be. However, while the rise in diversity doesn’t appear extreme enough or fast enough, and we have yet to achieve parity at all levels, there is an inevitable time lag from implementing change to seeing results, and we mustn’t lose heart.

On closer inspection of the data, we must take solace in the fact that we are on the right track. The actions we are now taking as an industry to improve diversity will inevitably begin to bear fruit and ensure this positive, long-term trajectory continues.

On this note, looking at the most significant trends, while the year-on-year figures reveal only a marginal increase in women in C-suite roles, from 30.3% in 2016 to 30.9% in 2017, looking at the longer term, this has increased from 23.3% back in 2006, when the industry was first surveyed. And I am proud that the IPA has a female president for the second time in its history.

A similarly nuanced picture also emerges regarding BAME figures. In 2017 12.9% of individuals were from a BAME background, again up only marginally from 12% in 2016. However, looking at the longer term, the proportion is double what it was in 2007 (6.1%). 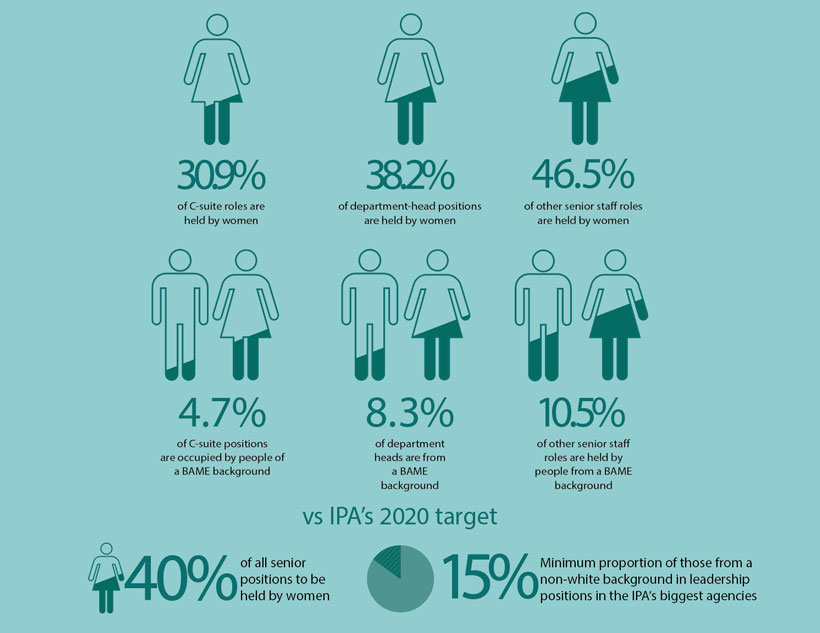 There is also some welcome news at the junior end of the business where the numbers of women and those from BAME backgrounds are significantly higher, ensuring the funnel leading to the senior level is in good shape. Nonetheless, it is imperative that we ensure this talent stays in the industry and climbs up to the top spots. And, that once there, it stays there.

So how are we doing this?

Not a day goes past, it seems, that we don’t hear of another dazzling agency initiative and step forward in addressing diversity. To name just a few: Grey has launched the industry-wide Diversity Taskforce; Engine has launched its Better with Balance initiative coupled with a manifesto of tangible actions to address diversity; while my agency, CHI & Partners, has removed the requirement for CVs and personal details from our entry-level scheme SPARK, ensuring a level playing field for all applicants, whatever their educational or ethnic background.

And, of course, the IPA has been working tirelessly to help agencies on this path. There is its Advertising Unlocked nationwide careers day, where more than 70 agencies invited people from all walks of life into their agencies, its ongoing Creative Pioneers apprenticeship programme, and its Women of Tomorrow Awards, held in partnership with Campaign, to name but a few. I am also proud to be representing you all, and the industry we love, by sitting on the UN Women/Unilever Unstereotype Alliance.

Many of these IPA and agency initiatives, along with practical steps, resources and insights are available on the IPA’s diversity hub, which I urge you to visit at www.ipa.co.uk/diversity.

As we can see, the gears are in motion, but it’s now time to step on the accelerator.

We’ve gone from benchmarking our diversity to planning how to address it. Alongside this we are increasingly vocal as an industry about the absolute need for equality and calling out our disgust – I use that word vociferously – on hearing of unacceptable behaviour.

I now look forward to witnessing the knock-on effect of this cross-industry narrative, strategy and the myriad diversity-focused activities, and to seeing tangible evidence through this annual survey of how this is helping to create a much more diverse and level playing field. It will be a long-term strategic behaviour-change programme, but one that will benefit individuals, agencies and the industry at large. 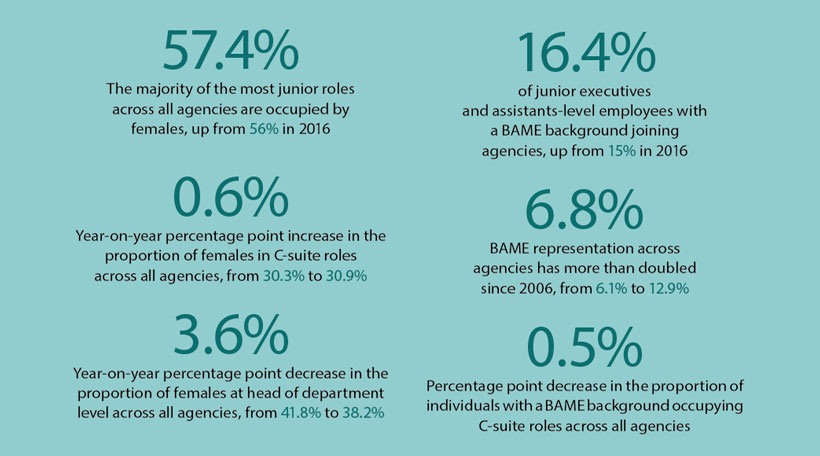 Gender: C-suite remains behind the curve

The ad industry employs a healthy number of women. The challenge, however, lies in evening out the balance at the highest level. Analysis by Alex Brownsell.

First, the good news: the advertising industry has no problem attracting female talent. Although the historic weighting toward men in creative agencies and women in media agencies persists, across the sector, the IPA’s 2017 Diversity Survey found a near 50/50 split between genders.

Indeed, the majority of new talent arriving at agencies is now female: only 40% of those employed at the most junior executive level are male. 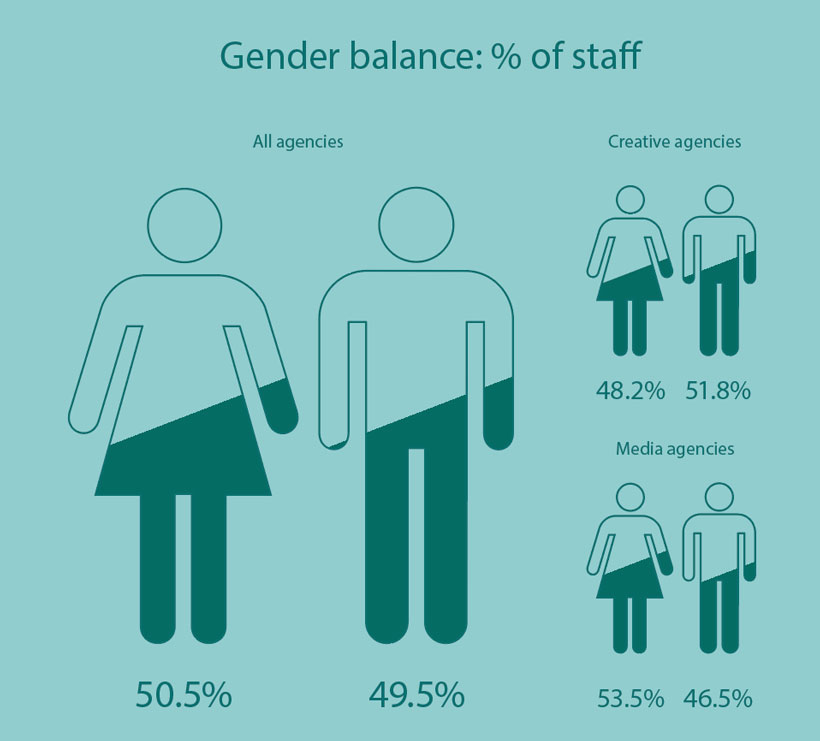 The ongoing challenge for agencies is to ensure a fairer gender balance at senior level. The proportion of women achieving C-suite roles has scarcely increased in the past year, despite the ever-louder calls for female leadership.

Progress has been made, but perhaps not quickly enough. It will certainly be a challenge for the industry to reach the IPA’s stated target of 40% of all senior positions to be occupied by women by 2020. Positive statements of intent must become positive action in 2018.

Gender salary-differentials by role: % of staff vs % of salary total 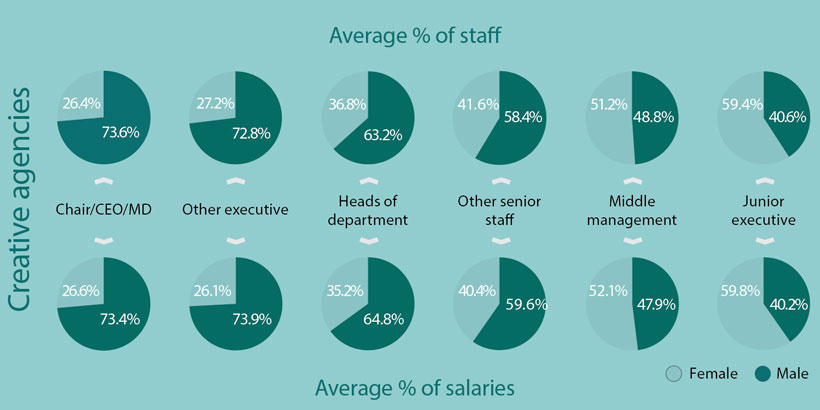 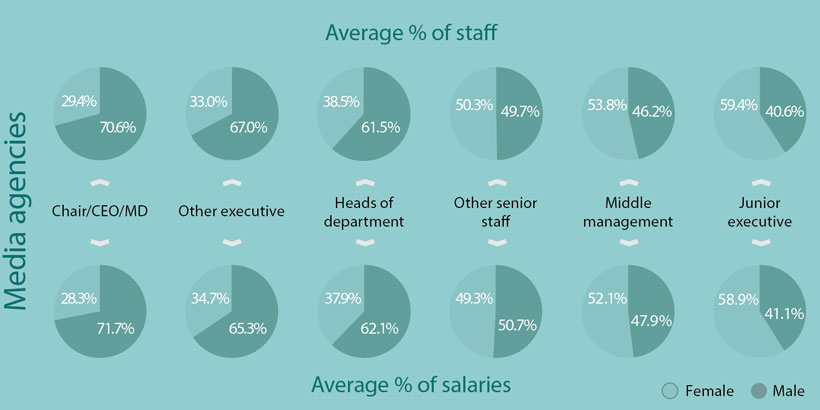 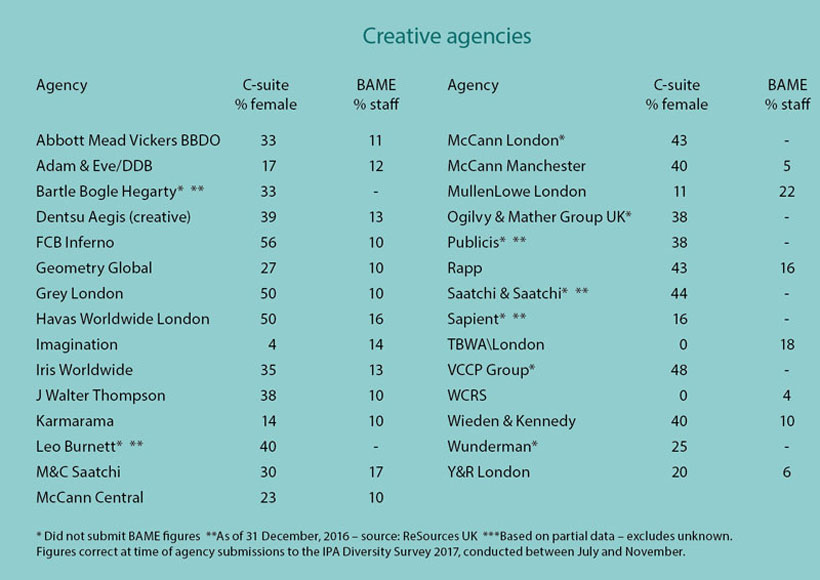 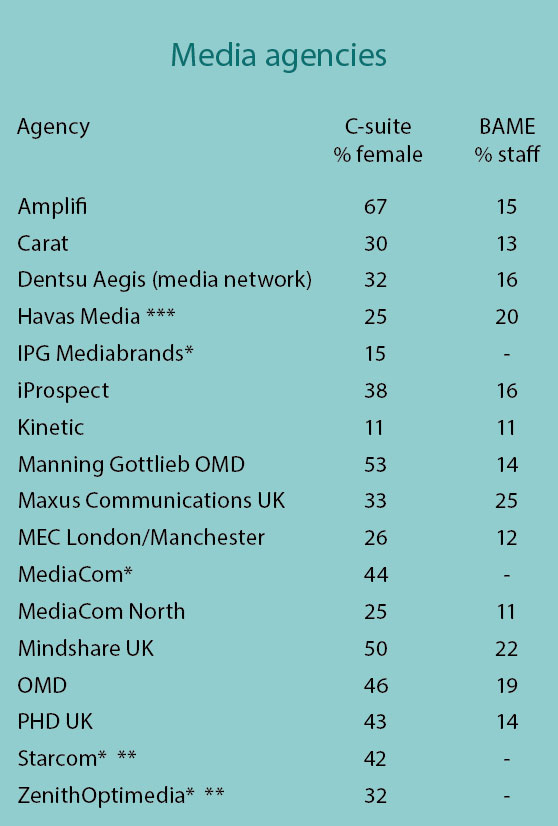 In this year’s IPA Diversity Survey, the gender divide is displayed in percentages, rather than by the number of roles.

The findings show that there are several agencies across the spectrum – including Amplifi, FCB Inferno and Manning Gottlieb OMD – that have a female majority at C-suite level. However, the majority of agencies still have work to do to achieve parity.

While the percentage of females in C-suite and head of department positions is disappointing, the Diversity Survey shows they are at least being paid largely in line with their male counterparts.

At chair/chief executive/managing director level, for instance, women occupy 27.2% of roles and take home 27.1% of pay. The largest deficit in pay is at head of department level, where 37.2% of positions are held by women, but they receive only 35.9% of total pay. It is only at the bottom of the ladder that women are paid more than men: at middle management and junior executive levels women earn 0.2% more than would offer parity with the percentage of staff.

BAME: Room at the top

Behaviour-change programmes are seemingly having an impact, but there is an ongoing paucity of BAME representation at a senior level

The proportion of agency employees coming from a BAME background has more than doubled since 2006 – rising from 6.1% to 12.9%. There was also a 0.9 percentage point year-on-year increase, indicating that long-term behaviour-change programmes are having an impact.

Media agencies are making strides faster than their creative counterparts, with 15% of employees now coming from a BAME background, compared with 10.7% at creative agencies.

At a senior level, however, the picture is less rosy: there was a fall in the percentage of C-suite roles held by ethnic minorities, from 5.2% in 2016 to 4.7% in 2017. Meanwhile, disappointingly, just 2% of chair/CEO/MD roles are currently held by people from a BAME background.

The IPA’s aim that, by 2020, 15% of people in senior positions will be from a non-white background is proving a tough target. 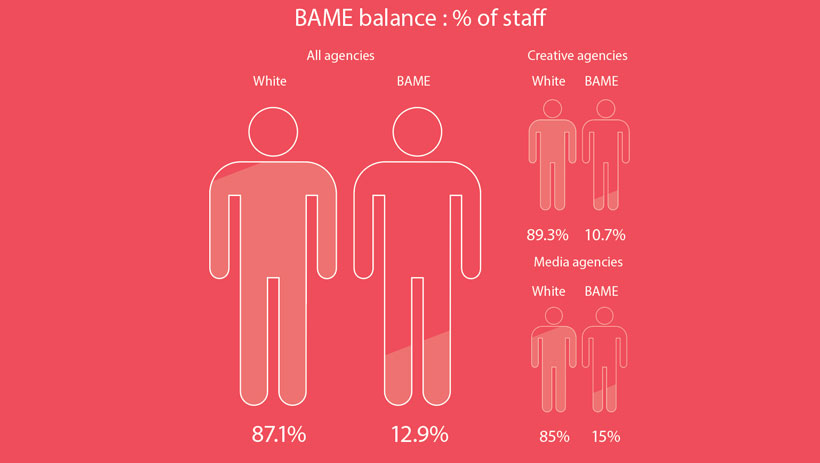 Ethnic diversity: % across all agencies by job grade

Progress is being made to transform advertising into a more ethnically diverse industry. Thanks, in part, to resources such as the IPA’s Diversity hub, and the rise of unconscious-bias training, a greater proportion of graduates and school leavers coming into agencies is doing so from a BAME background. The proportion of junior executives and assistants from a BAME background now stands at 16.4%, up from 15% in 2016. That rises to 17.9% when looking at the most junior roles in media agencies. With an overall percentage of 12.9% across all agencies, it shows the industry is edging toward matching the UK as a whole. 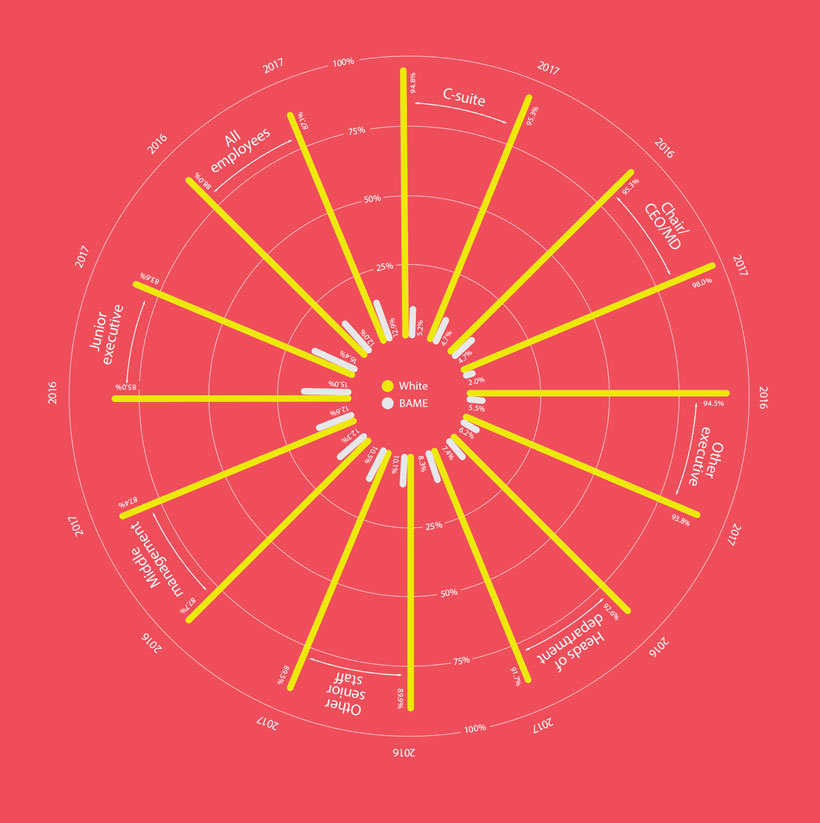 How director MJ Delaney forged an unconventional path to filmmaking

The & Partnership London - all change or more of the same?

No Excuses: what brands can learn from the CES backlash