A poll of Campaign readers found that half expect a decline of at least 20%.

Campaign readers are pessimistic about the prospects for the UK advertising market in the face of the coronavirus pandemic, with more than half of those participating in an online poll saying the market would decline by at least 20% over the next six months.

An upbeat 7.9% of respondents expected the market to be flat or better over the next six months – although it is worth noting that a flat market would still represent a slowdown on the healthy growth forecast for the market before the impact of the viral outbreak started to become clear. 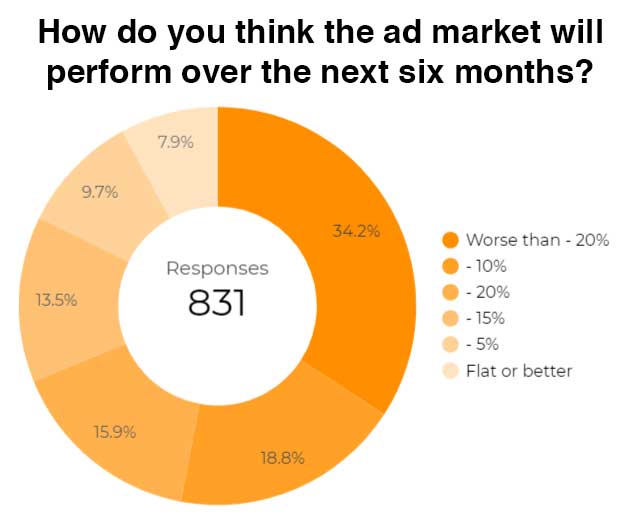 According to a group of former chief economists of the International Monetary Fund interviewed yesterday by the Financial Times, the world may have already entered a global recession – although current IMF chief economist Gita Gopinath declined to offer such a pessimistic verdict.

The share prices of WPP and Publicis Groupe have continued to fall steadily since Campaign reported on them reaching a new low last Monday, while those of Omnicom and Interpublic have yo-yoed somewhat on the US stock market.

Speaking to Campaign, Enders Analysis chief executive Claire Enders said she thought that while TV advertising could suffer a 15-20% decline, a hit of that size to the overall market was unlikely due to the strength of digital, which she expected to remain in growth.

"There’s no doubt that a fundamental change in consumption lasting several years is perfectly feasible," Enders said, describing what she called the worst-case scenario.

But she added that she expected "emergency measures to be put into action very swiftly" by the government to support failing industries, meaning the economy could avoid a devastating recession.

Media is fuel for the growth engine