Ancient & Modern has been founded with John O'Driscoll and Seamus O'Farrell and aims to counter 'the relentless march into digital and social media'.

A trio of adland’s most senior figures – one of them in his 70s – plan to defy their years by launching what they claim will be "London’s oldest agency".

Adrian Holmes, 66, the former Lowe worldwide chairman and one of the founding partners of the newly christened Ancient & Modern, said: "We’re doing it because we love doing what we do."

He is being joined in the start-up by John O’Driscoll, 72, the award-winning creative director best known for his work on Volkswagen before starting a 30-year career as a commercials director, mostly at the Paul Weiland Film Company.

The third partner is Seamus O’Farrell, 55, whose agency career spans Abbott Mead Vickers BBDO, Bartle Bogle Hegarty and Leo Burnett, where he ran the agency’s Kellogg’s account. He was one of the BBH staffers who quit to set up Soul, has worked as a strategic consultant and as marketing and communications director of Prostate Cancer UK.

O’Farrell said: "We’ve 130 years of professional experience between us. We’re not trying to reinvent the wheel – just reintroducing it."

Holmes, a writer who partnered the art director Alan Waldie to create one of Britain’s best-remembered commercials, Heineken’s "Water in Majorca" in 1985, said the new venture would focus on the craft skills he claimed were now lacking in many agencies.

"We think there is a counter to the relentless march into digital and social media," added Holmes, who is also Y&R’s former executive creative director for EMEA. "We believe there are lots of clients who would love to work with people who can do ads in the way they would wish them to be done – with craft skills, care, wit and charm."

O’Driscoll said: "There’s lots of ‘old school’ creatives still working. There’s no shortage of skills on which to draw." 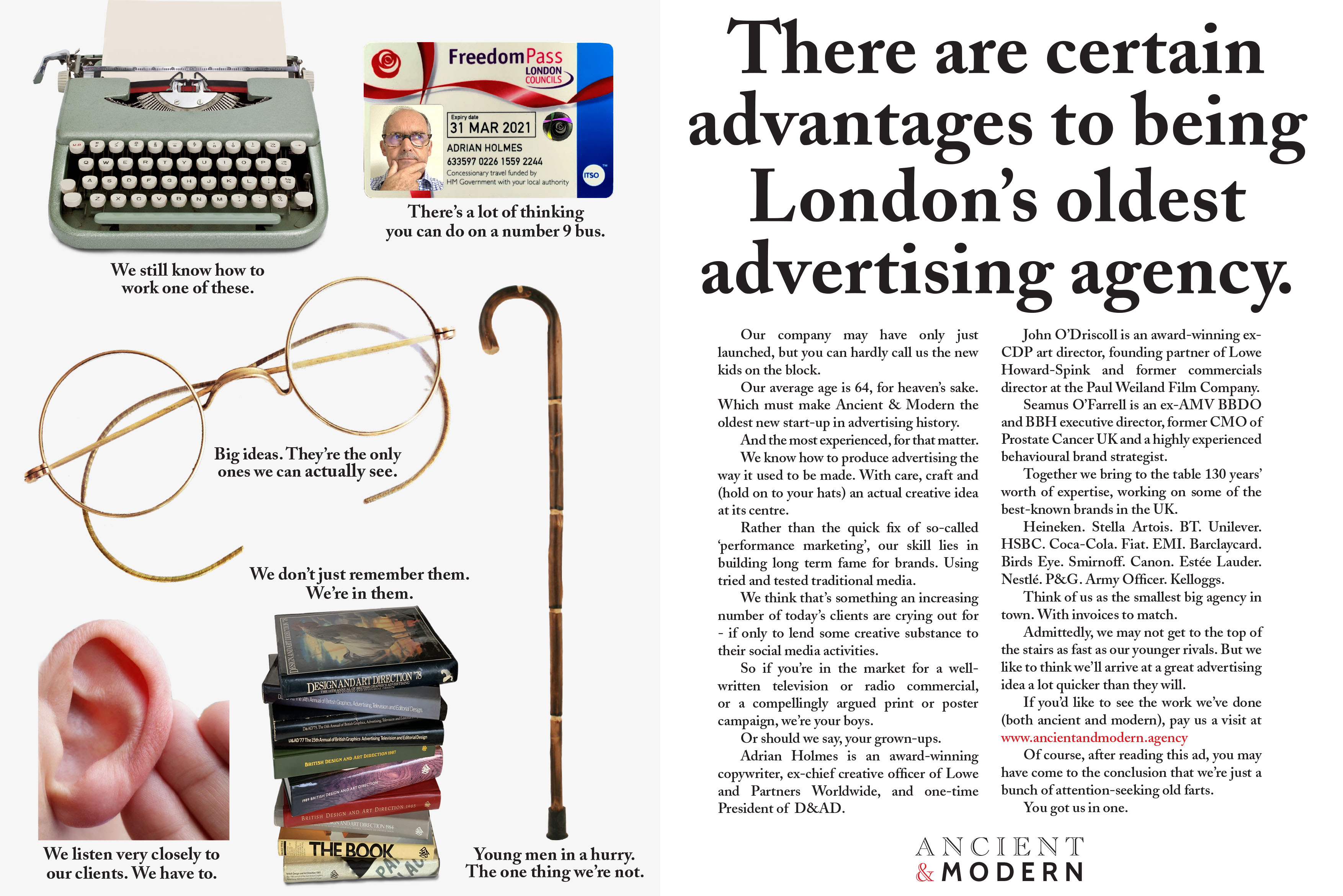 The agency is introducing itself with an ad that jokes about the trio’s veteran status. "Admittedly, we may not get to the top of the stairs as fast as our younger rivals," it declares. "But we like to think we’ll arrive at a great advertising idea a lot quicker than they will."

The agency begins life with no staff and no office – the founders will operate out of each other’s homes – and a client list comprising Dignity, the UK’s second largest group of funeral directors; the London Diabetes Centre, and City Harvest, a London-based surplus food distribution charity.

Meanwhile, the trio are hoping to build on their relationship with Unilever, having worked on promoting the company’s commitment to reducing its plastic waste.

The creation of Ancient & Modern formalises an informal 18-month working relationship between the partners. Holmes and O’Farrell have known each other since 2013 when Prostate Cancer UK was a client of Holmes’ previous agency, Holmes Hobbs Marcantonio, which he founded with Steve Hobbs and Alfredo Marcantonio and which is being wound down.

The partners insist their agency is not intended to be a short-term venture and that they want to get a succession management team in place. "At the moment we’re just taking pleasure from doing ads," Holmes said. "But we’d like to bring in younger but like-minded people who want to see things done properly."

Industry intermediaries suggest the new agency could enjoy some success. "The absence of a strategist is worrying," one said. "But the important thing is to focus on the right kind of client and not to try being all things to all people."

Martin Jones, the AAR’s managing partner, said: "All three founders are very good practitioners and they’ll start by getting business from people they know. The test of whether they can stand on their own feet will come in 18 months’ time."

Is the art of copywriting dying out?

The top ten funniest TV ads of all time