Visitor numbers to the four main UK price comparison sites, including Comparethemarket.com, are becoming increasingly sensitive to changes in adspend, according to study by Nielsen.

The study compared spending on advertising by MoneySupermarket, GoCompare, Comparethemarket and Confused.com, against the number of monthly visitors from home and work computers between 2008 and 2010.

Nielsen said: "Audiences remain fickle and it appears to be hard to retain an audience once an ad campaign has finished".

Over the period the correlation between increases in adspend and increases in the number of visitors to price comparison websites has grown from 54% in 2008 to 75% in 2009 to 82% in 2010 – suggesting adspend increases have become more effective at driving site visits.

All price comparison sites’ trading is done online so changes in online audience figures are a good indicator of their advertising's effectiveness, according to Nielsen.

GoCompare spent the most on advertising in 2010. Its £28m outlay was 30% more than its closest rival MoneySupermarket, which spent £21.6m.

MoneySupermarket is the most popular price-comparison site over the period, averaging three times as many visitors from home and work computers as its nearest rival Confused.com.

It also spends the least on advertising per unique UK visitor, and reduced outlay from 88p per person in 2008 to 58p in 2010.

GoCompare and Comparethemarket, which are more recent entrants to the market, have experienced a significant cost-per-visitor drop since the launch of their respective opera singer and meerkat ad campaigns in 2009.

The study illustrates how TV advertising takes precedence for all four price-comparison sites. Comparethemarket invests 92% of its marketing budget and GoCompare invests 89%.

MoneySupermarket invests more heavily in digital than the other sites. 14% of its overall adspend was for online, compared to 1% by Confused.com and GoCompare and nothing by Comparethemarket.

Comparethemarket’s TV ads, featuring Aleksandr Orlov, are the most popular. 73% of TV viewers remember the brand and like the ads "a lot" or "somewhat".

GoCompare has the highest percentage of viewers who can recall the brand's name the next day. However its ads, which feature the opera singer Gio Compario, polarise viewers.

The research reveals price comparison sites attract more female visitors than male. Comparethemarket attracts the most 16- to 30-year-olds, and all the sites attract a high number of over 50s, with MoneySupermarket and Confused.com being the most popular with pensioners.

In Marketing’s annual poll, GoCompare’s operatic ads were named the most irritating in the UK for the second year running. 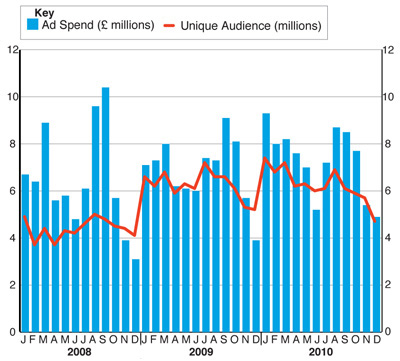 Close-Up: Are billings a good gauge of success?

Are we falling out of love with price comparison sites?