Brands are tapping into excitement over the debut of Star Wars: The Force Awakens in their advertising. 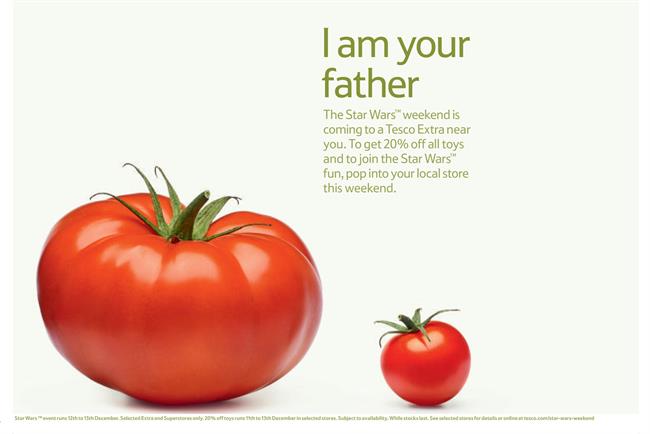 Created by Bartle Bogle Hegarty, Tesco’s campaign promotes its "Star Wars Weekend" discount at Extra stores over the weekend. Posters show carrots, sweetcorn and tomatoes along with the words "I am your father," which references a scene in The Empire Strikes Back.

O2, one of Disney’s licensing partners, brought together the droids from old Star Wars films with one from the upcoming sequel to promote a movie-themed giveaway and tickets to the premiere. VCCP made the spot.

Some people on social media said they were more excited over a trailer for the game Star Wars Battlefront than the actual film trailer.

The retailer’s action-packed Christmas ad, which features professional skiers and snowboarders, includes a nod to the new Star Wars movie with a stuntman wearing a Darth Vader mask.

Subway recreated the Star Wars cantina scene. In the ad, a Subway restaurant is full of people clad in Star Wars costumes. When a couple dressed normally walks in, the music comes to a stop, but the woman reveals she’s carrying a lightsaber.