The online dating explosion (1,400 apps and sites in the UK and rising) has created a new avenue for marketers to explore. Yet while dating app ad campaigns have so far proved the exception rather than the rule, times are changing and Happn hopes to be a driver of that change.

Between brands unsure how to use their unique features and apps often lacking a fully-developed ad revenue strategy, the channel remains under-exploited. Those campaigns that do surface still regularly make news headlines, partly due to scarcity value.

Yet their newsworthiness has another, more positive element and the headlines are also reflective of the creative, quirky thinking these campaigns encourage. While smartphone dating apps have their limitations (small screens, short attention span, a need to battle against growing resistance to ads that interrupt content) they also offer huge potential and force marketers to think differently about how they get their message across.

Tinder has been the app of choice for many, but newer rivals like Happn are beginning to make an impact too. The France-based app is making a name for itself among NGOs looking to promote good causes as well as brands. 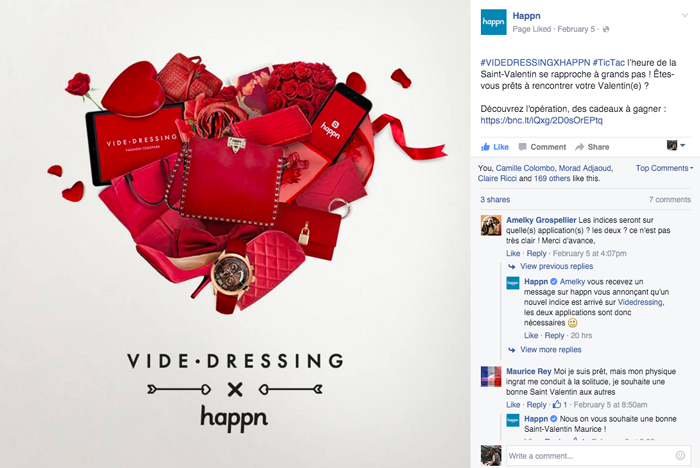 Happn’s USP is that it focuses on urban centres and is all about meeting people users have "crossed paths with" in real life, encouraging continuous daily use rather than selective visits.

The app has been adding 1.2m users a month but is currently still fairly ad-free even though this year, after a long period of testing, it has ramped up its efforts to boost advertising.

Marie Cosnard, Happn’s head of trends, told Marketing that while the company is currently working to develop a clear strategy to generate more advertising revenue, it will maintain a very selective policy.

"On our side, we’re currently testing a platform to add advertising into our revenue stream. But it has to be high quality. We don’t want to be the Times Square of apps," she says.

Where Happn has really made people sit up and take notice is with campaigns pushing good causes for Equality Now, Plan UK and the Art Fund.

The Equality Now One in Three campaign around International Women’s Day in March this year focused on the one-in-three women globally suffering physical or sexual abuse.It targeted users in 21 cities globally.

The charity and the app worked together to create a campaign that populated users’ timelines with images of bruised and battered women with the tagline "I’m one in three". The image would appear in a timeline that was frozen for a few seconds but as the member paid more attention to her by scrolling through her images, the bruises healed.

Cosnard says: "We stumbled across the stats and wanted to do something for International Women’s Day. The profile was inserted in the timeline in a very native way and the interaction was very easy. We had very strong engagement."

One virtue of dating apps is how campaigns can be localised. The Plan UK campaign last autumn, which highlighted forced child marriage, was delivered ready-made by J Walter Thompson. It ran in London only and offered users a profile for ‘Mark, 32’ who could not be rejected. The text highlighted the fact that dating is all about choice and read: "When we’re free to date whoever we like, it’s hard to imagine only having one option. So whether you like Mark or not, he’s sticking around."

Not that all awareness-raising campaigns are about abuse. The Art Fund ads promoting the National Art Pass late last year were humorous, offering users profiles of John Donne, aged 420, who’s "fluent in Latin" and "a bit of a poet", or Rossetti’s Monna Vanna, aged 149, who’s "a passionate, fiery redhead".

"While testing advertising ideas we got into conversation with NGOs," Cosnard says. "Yes, we can make money with companies advertising products but we also have the power to promote good causes and we’ve had some great feedback.

"When NGOs are fighting for a cause that’s linked to human relationships, such campaigns make people think about other types of relationship."

Happn also works with brands, of course, most notably with Fiat for its 500 model.

"We did a pure product campaign and about half of the users who saw the ad interacted with it," Cosnard explains. "They entered a draw to win a romantic trip to Rome. We insisted on it. It didn’t make sense to just have a car in the timeline. We personalised the profile so it was a person (Miss fiat or Mr Fiat) with the car in the background." 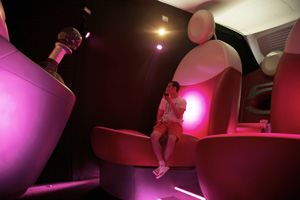 The same principle applied with its ads for Videdressing, one of a burgeoning number of fashion resale sites. The campaign around Valentine’s Day this year featured a little character and involved users in a scavenger hunt in French cities with the ultimate aim of winning a Valentino handbag (Valentine’s and Valentino both being seen as romantic and therefore ultra-relevant to Happn members, Cosnard says.)

"We have very little advertising at the moment, our platform isn’t industrialised so we have conditions when we let people advertise. We want people to not just be ‘subjected to’ an ad but to interact with the advertising," she explains.

Match.com to remove ads that apparently describe freckles as an 'imperfection'

Long and winding road: the life and death of advertising clichés