What makes an ad particularly memorable or likeable? Gail Kemp looks for clues among the hits of 2013.

While brands last year capitalised on emotive national milestones such as the Jubilee and the Olympics, 2013 had a greater focus on financial reality and the cost of living.

Yet, as the economic news improved throughout the year, advertisers finally began to believe that recovery might be around the corner and put TV at the heart of their advertising schedules.

Marketing monitored the effectiveness of that investment, running top 10 recall tables every week on our website. Adwatch of the Year combines those tables into a single "mega-league", which shows the 10 brands that made the biggest impact on Britain’s viewers.

We have also calculated the most memorable individual commercials and tallied up the "best-liked" TV advertising across the year. 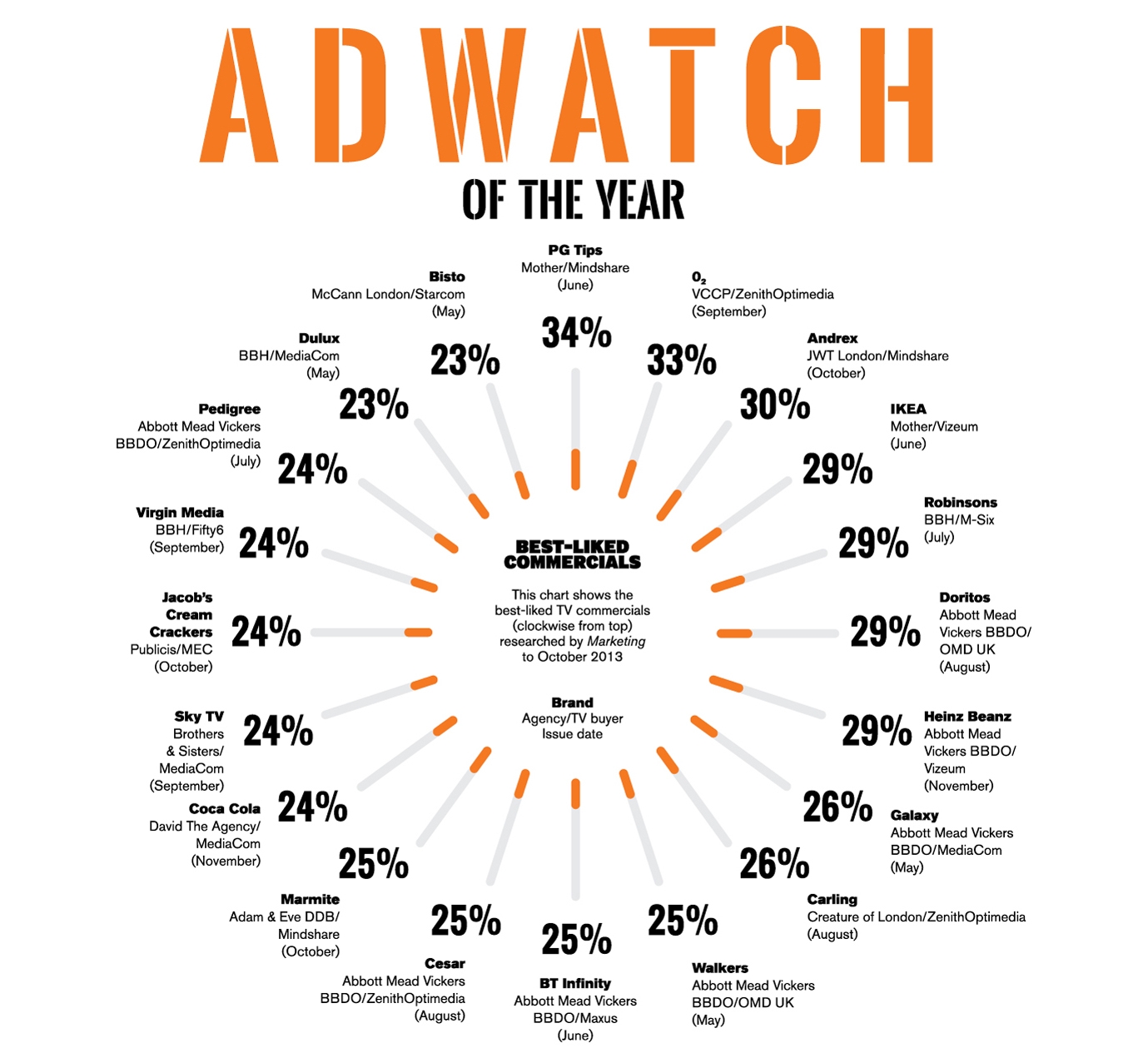 Surprisingly, some high-profile brands failed to make the cut, the biggest losers being Sky and Morrisons – both outside the top-10 highest recall for the first time in six years – while traditional high-scorers Currys, Tesco and Marks & Spencer are absent from the top 20.

Argos retains its number-one recall slot, with Aldi and DFS improving on 2012 to take the second and third places respectively. Gocompare.com is not only the biggest riser in terms of recall – up eight places to number nine – but also, in a tie with Virgin Media, takes top honours in the fight for individual ad recognition.

The year’s big success story is Shop Direct, with its Very.co.uk and Littlewoods online retail brands snatching fourth and eighth place on the smallest budgets in the top 10, making theirs the year’s best-value TV advertising.

Smart brands get consumers to interact with the campaign.

Ad agency St Luke’s won both accounts 18 months ago with a brief to differentiate the two brands. It inherited the celebrities Shop Direct had already brought on board (Holly Willoughby and Fearne Cotton for Very.co.uk and Myleene Klass for Littlewoods), but introduced strong, distinctive themes – "Do it in style" for Very and "The Littlewoods touch".

St Luke’s chief executive, Neil Henderson, explains: "The celebrities are important because they turbo-charge awareness and create affinity, but the brands are much more than that."

Until this year, Shop Direct advertised only in the pre-Christmas "golden quarter", but the retailer’s media agency, Carat, has developed an "always-on" TV strategy supported by targeted TV sponsorship and increased budget. The latest financial figures show the investment paid off, with Shop Direct’s first pre-tax profit in a decade, while Very and Littlewoods outperformed the market with double-digit sales growth.

Gareth Jones, Shop Direct’s group retail and strategy director, confirms: "Our advertising helped to bring in 1m new customers to our digital department stores every year. As a consequence, we’ve increased our spend year on year for the past two years."

He adds that, like most retailers, Shop Direct measures the commercial return of its advertising through detailed analytics and econometric modelling. "The econometric we use provides ROI by channel and helps us understand any underlying brand effect that advertising has on the business. This information is then used to shape and develop our overall investment level and spend by channel." 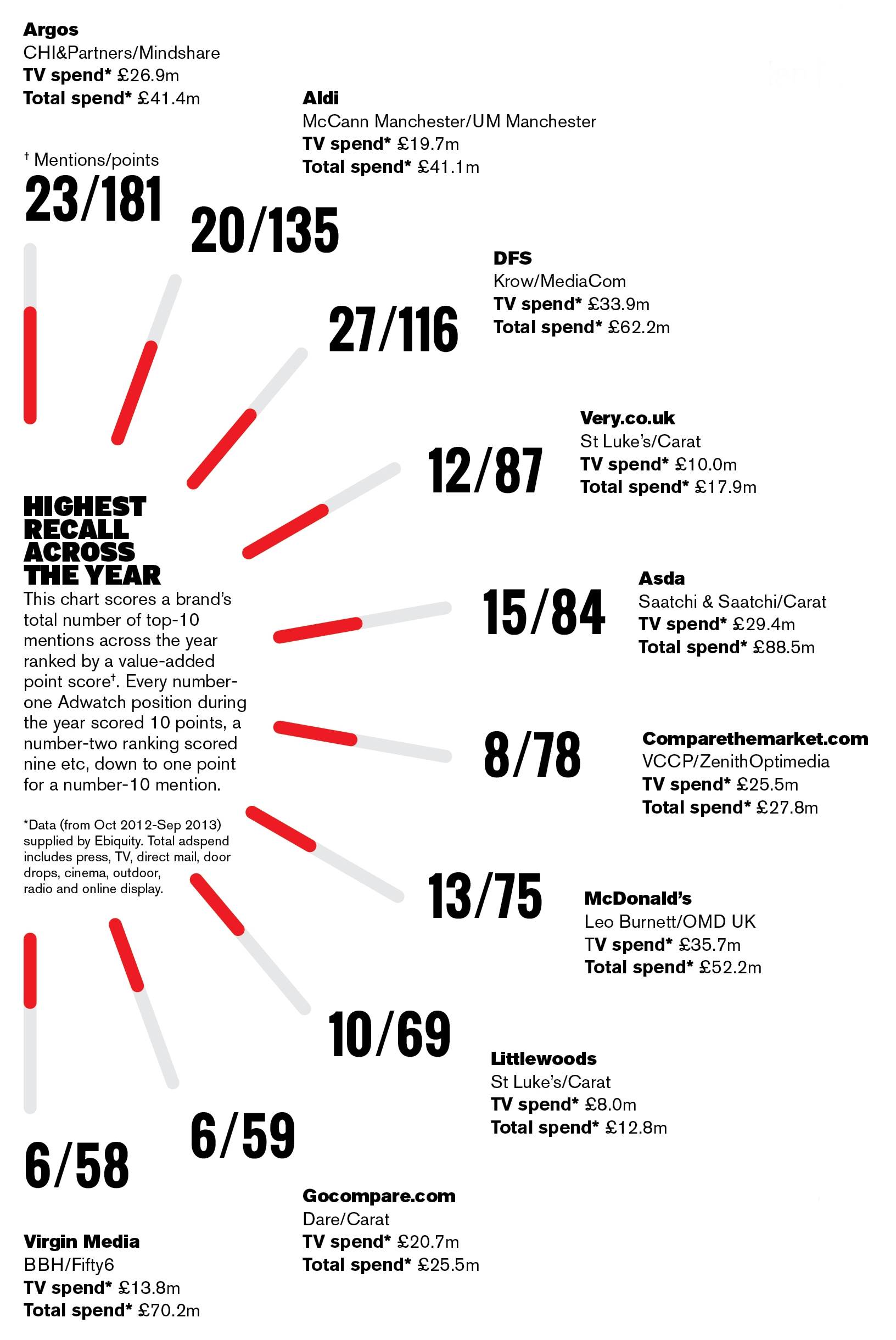 The fact that TV is key to Shop Direct’s success is no surprise to Thinkbox managing director Lindsey Clay. "For the past few years, we have been living in a golden age of TV content, which has meant a golden age for brands on TV," she says.

"In 2013, TV continued to expand, both in terms of its colonisation of new screens and brands’ investment. This increased investment has been partly fuelled by a greater understanding and appreciation of the strength of linear TV at the heart of popular culture and TV’s huge effect on other media – especially online, mobile and social."

The economic gloom certainly appears to be lifting, with the Advertising Association’s latest figures revealing a UK adspend back to pre-recession levels and predictions of a record £18.7bn spend next year. That echoes findings from the CIM; its quarterly Marketing Confidence Monitor has shown consistent improvement throughout 2013.

Thomas Brown, associate director for research and insights at the CIM, confirms "a significant uplift in confidence" and expects a renewed emphasis on integration in 2014. "TV provides a halo effect, driving awareness and recall, but smart brands get consumers to interact with the campaign via other media and become part of the dialogue," he adds.

Second-screen behaviour among viewers has meant a smaller divide between consideration and conversion activity – a phenomenon that has been seized on by Argos, which consistently maximises its TV investment with innovative digital support.

The ads people talk about are the ones they just plain like.

Those firsts include a new alien baby (capitalising on the birth of Prince George); fans named the character via Twitter, with the name, Blue, announced "live" on TV. Similar "events" are happening this Christmas, with ideas crowdsourced from TV blockbusters like The X Factor and The Only Way is Essex, followed by Twitter interaction and more TV "live results".

Yet recall is not everything. Each month in Marketing, Adwatch researches the likeability of 10 of the most interesting commercials. The likeability table charts 2013’s big-scorers and (in addition to the fact that the top three all feature animals) it is notable that seven were created by Abbott Mead Vickers BBDO.

The agency’s chief executive, Ian Pearman, says: "Likeability is generally underrated, partly because it is hard to pre-test, as it is all in the execution. Yet it makes a huge difference to the effect of the final advertising.

"In our experience, the ads people talk about in real day-to-day conversations are the ones they just plain like. Popular TV is rocket fuel for likeable advertising, not least because broadcast channels have big programming formats that go hand-in-glove with the populist feel of the brands we promote."

Pearman believes that, despite the improved economic outlook, brands will continue to focus on value messages. Nonetheless, he adds: "I hope that clients will put a higher value on like­ability. We can still deliver a value message but wrapped in a less hair-shirt, more aspirational way. Brands will soon start to look like they’re enjoying themselves again."