The history of advertising is the history of culture and society. Since World War II, we've seen four distinct eras of communication, each the child of its age. The age of function, the age of emotion and the age of ideology have brought us to where we are today. We are now in the age of the audience - where, for the first time, the people we are trying to reach are in the driving seat. We'd better know how to be welcome passengers.

For a good while now, the interruptive advertising model, designed to puncture and punctuate popular culture, has been approaching a "mass extinction event".

We all know audiences are less tolerant of advertising than ever. Kantar TGI data from 2014 showed that a third of UK adults are mentally closed to advertising. Extrapolating that data, half of the UK is likely to be unreceptive to advertising by 2018.

Look at the mobile ad-blocking numbers from Asia-Pacific and the news is as bad, if not worse – 36% block. That’s 159 million people in China, 122 million in India and 38 million in Indonesia. The West will soon catch up in the "Adblockalypse".

Emerging from Cannes, the most glamorous business-to-business show on Earth, one does wonder whether, as an industry, we’ve lost the plot – chasing technology trends and fads, showcasing creative muscle and swigging rosé. All this precisely when audiences don’t want what we make any more and young people no longer covet a career in our industry.

But there is a bright future in a world where audiences are enjoying more useful and entertaining content than ever before. YouTube receives more than one billion unique visitors a month. Netflix is exploding in popularity across the world as it creates exactly the shows its audiences want to watch. By 2017, Cisco says, video will account for more than 69% of internet traffic. Gaming vlogger PewDiePie has just short of 46 million YouTube subscribers and raked in $7.3m last year. 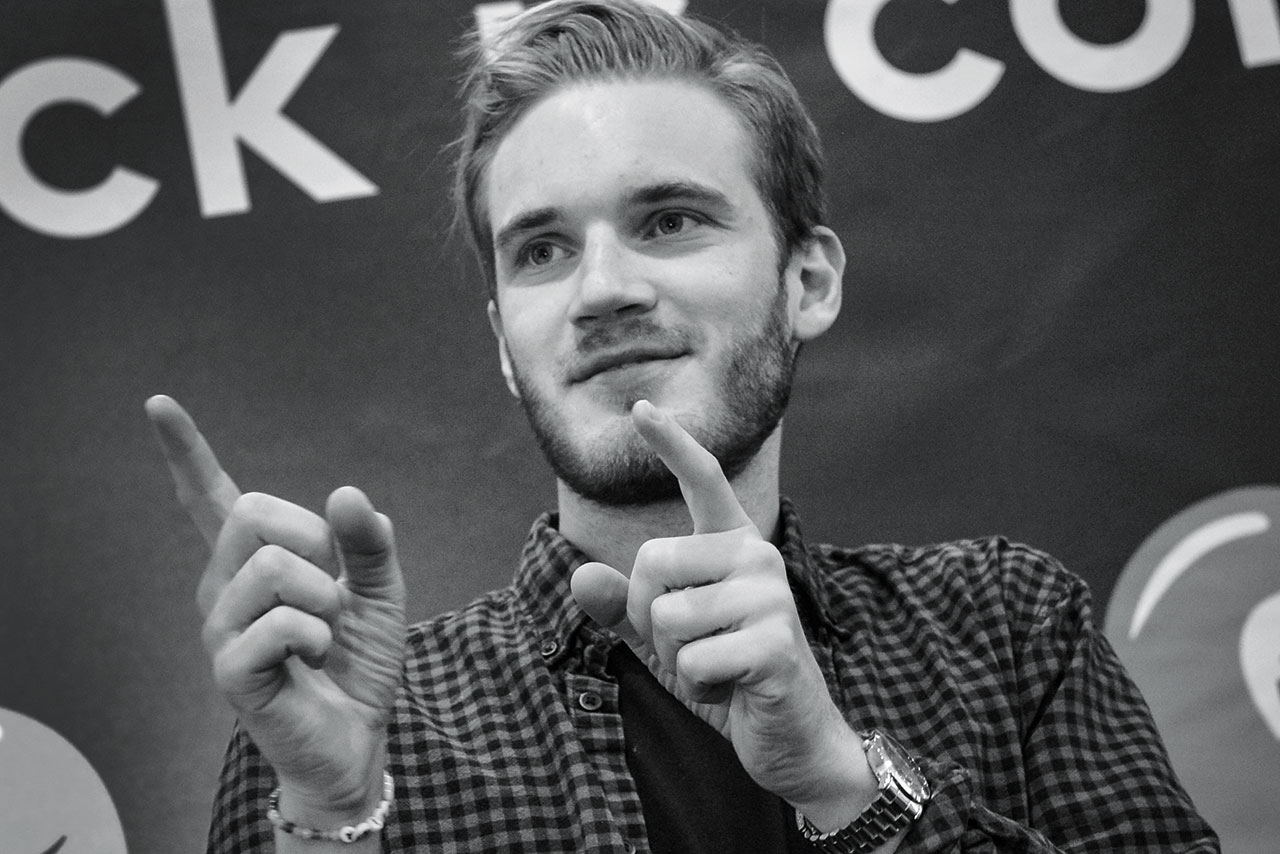 Find your role and it’s quids in.

But the old way of communicating is facing a rapid and widespread decline. If you look at similar mass extinction events that have occurred in other sectors, patterns begin to emerge that we would be wise to learn from – fast.

In music, the people seized power as far back as 2000. Napster et al liberated audiences with the joy of peer-to-peer music file-sharing and, suddenly, the centralised, "top down" music industry creation and distribution model looked antediluvian. Today, we live in a fractured, decentralised musical landscape in which many musicians operate entirely outside the record-label model. Distribution is everywhere, discovery is everywhere, creation is democratised.

In film, the likes of LoveFilm blew the doors off Blockbuster and BitTorrent came along and did a Napster on movie distribution. As with music, distribution and discovery are on every TV, laptop, phone and tablet. But it’s when creation became audience-focused – via Netflix and Amazon – that a truly new era began.

Our industry has changed too, but arguably nowhere near as much as we’re about to witness. Our own industry has historically produced three main types of advertising, beginning with functional: how-it-works, what-it’s-for ads in the postwar era (the age of function). This was followed by an era of more emotive creative work as competition between brands heated up (the age of emotion). During these periods, the ad industry was totally in control of when and how those messages were delivered.

We’ve recently been experiencing the age of ideology, as smarter brands began to realise that emotion and function were increasingly commoditised and that large-scale cultural and social trends could be co-opted towards brand innovation. And if you couldn’t find your own compelling ideology, you could jump on the coat-tails of sustainability and environmental concern. Quickly, everyone started taking about "purpose" and "belief". Brands set their course towards a North Star positioning – to give themselves a role in society sometimes way bigger than the categories they operated in. Dove championed "real beauty" and Nike developed Nike+. And while the age of ideology has given a taste of what’s to come in the age of audience, we really "ain’t seen nothing yet".

What’s interesting is that in an audience-first, multichannel world, there is still room for top-down, centralised creation and distribution around key content, brands and franchises. One Direction and the endless stream of Marvel superhero movies are testament to that. But look closely and you’ll see that the studios and record labels are working ever harder to remove risk from the equation. One Direction were recruited from a TV talent show; Marvel has 50 years of fan culture behind it. Netflix seems to take risks – but these, informed by audience "big data", are in essence co-creations with their audiences. And it would appear that Red Bull TV, with its smart content creation and distribution model, is already on it.

In our industry, the role for top-down communications will continue to diminish. There will still be a place for it but its heyday is over. Whether, in an effort to manage risk, advertisers co-opt more celebrity and existing cultural properties, we’ll have to see.

Nevertheless, the key to the future of "advertising" is the understanding that context is everything, that ideas have to live and breathe according to the many moments in the day of your audience. Think of them as "consumers" at your peril. They’re anything but passive recipients of your messages. They are in charge. Ignoring them can be disastrous – just ask David Cameron.

The way brands will flourish is by learning to swim in the natural element of the audience. By creating authentic cultural connections that are contextually valuable to people, wherever they are and whatever they’re doing. We’re going to have to build porous organisations that are able and willing to collaborate with others and feel the pulse of our audiences.

We need to be smart, humble and flexible. We are further away from people than we have ever been, at the exact time we need to be the closest. As organisations grapple with their future, the risk is that "everyone has their face toward the chief executive and their ass toward the customer", as General Electric’s Jack Welch once put it. The industry needs to drop the inward-gazing nonsense it never seems to tire of. Because, if not, we will find ourselves "Napstered".

Zaid Al-Zaidy is the chief executive of Above & Beyond

The age of function 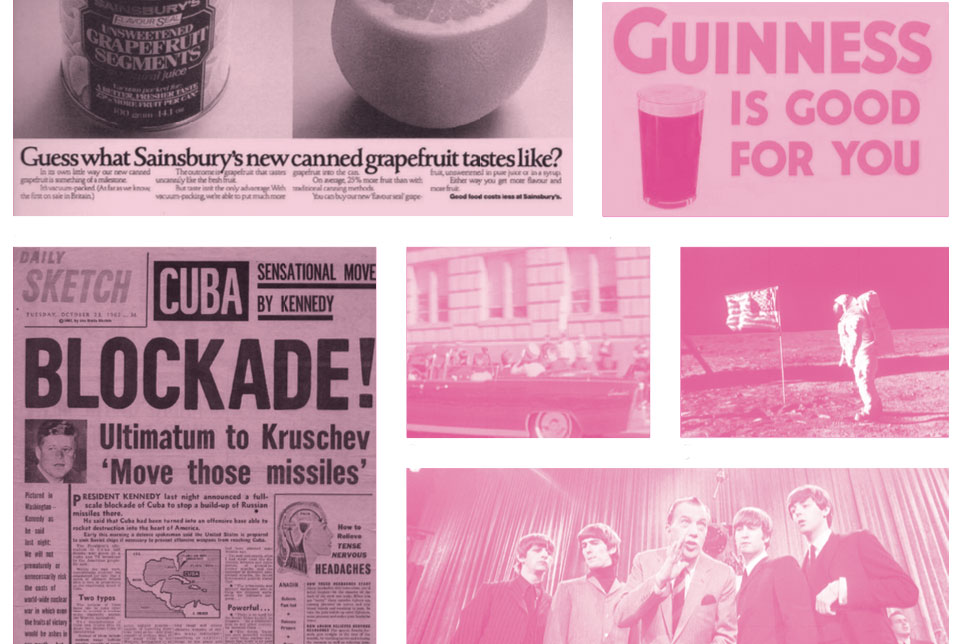 The boom in postwar production drives the advent of the consumer and an arms race in functional product innovation. The age of the USP is here – M&M’s "Melt in your mouth, not in your hand". Brands, going after "mind share" like never before, pursue the gap in each category where functional benefit meets the most valued consumer benefit. Cue a slugfest between brands as trivial and incremental product innovations pile on top of each other: whites become whiter than white. Cue text-heavy product-focused ads in print and presenters describing products direct to camera on TV.

Following the initial post-World War II period, it is a time of great social and political unrest, with the civil rights movement and women’s liberation gaining traction alongside anti-war protests sparked by the Vietnam War. The Berlin Wall goes up and the Cuban Missile Crisis occurs, plunging East/West relations into the Cold War. This is the era of Woodstock and hippies, Mary Quant, Twiggy and mini-skirts. Frank Sinatra croons, Chuck Berry rocks and Elvis rolls, ushering in the age of Bob Dylan, The Rolling Stones, The Doors, Jimi Hendrix and The Beatles.

TV screens are filled with the likes of I Love Lucy, Blue Peter, The Twilight Zone and Hancock’s Half Hour.

The age of emotion 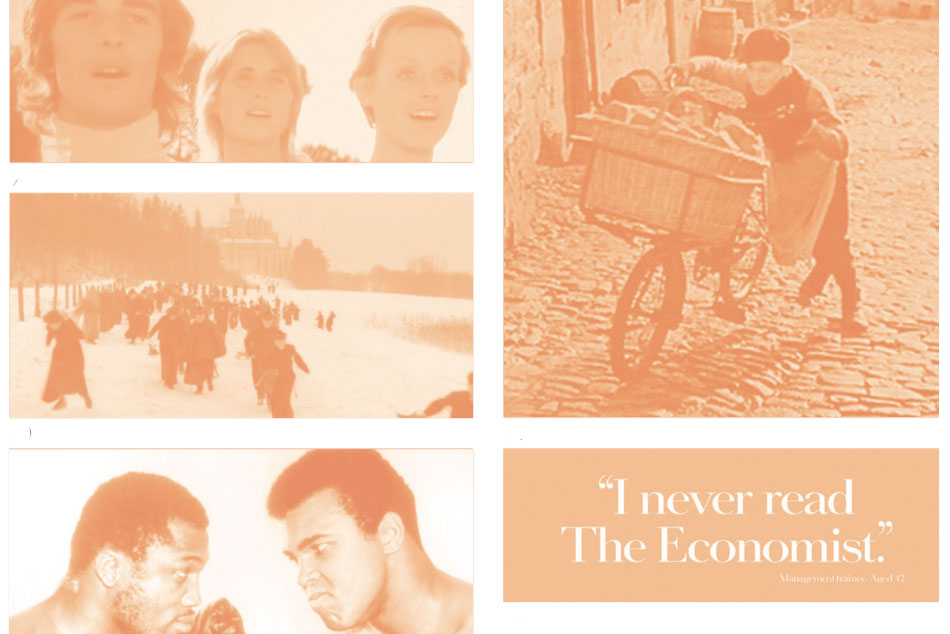 Products are no longer alone in their categories and consumers are increasingly unreceptive to functional product innovation (where are New Coke, Tab and Coke Blak today?). Brands begin to play with the "emotional benefits" of their products, addressing consumer "need states".

Values and positioning rise to the fore. Logos become meaningful and prominent. Competitive advantage is sought through emotional promise. Brands use ads to communicate what they stand for and thereby shape the perception of products in the minds of consumers. Brands also develop commercials with regular characters and storylines, engaging TV viewers and creating wider media stories about marketing campaigns.

East and West are entrenched in the Cold War but many other problems are also affecting the world. Terrorist groups proliferate, from the Red Brigades to the Baader-Meinhof gang. Frequent plane hijackings are a by-product of problems in the Middle East. Post-Watergate, the era of Margaret Thatcher and Ronald Reagan arrives, eventually heralding the end of the Cold War. Meanwhile, the miners’ strike causes long-term divisions in the UK.

Punk erupts on the music scene but it’s also the era of David Bowie, glam rock, prog rock, stadium rock and disco. People use their Sony Walkmans – the first personal music system – or their boomboxes. And kids meet the Nintendo Game Boy. On TV, long-running serials rule: Dallas, Dynasty and the UK’s own EastEnders and Coronation Street. Mass cultural viewing events, such as the Muhammad Ali vs Joe Frazier fights, are also the hallmark of this era.

The age of ideology 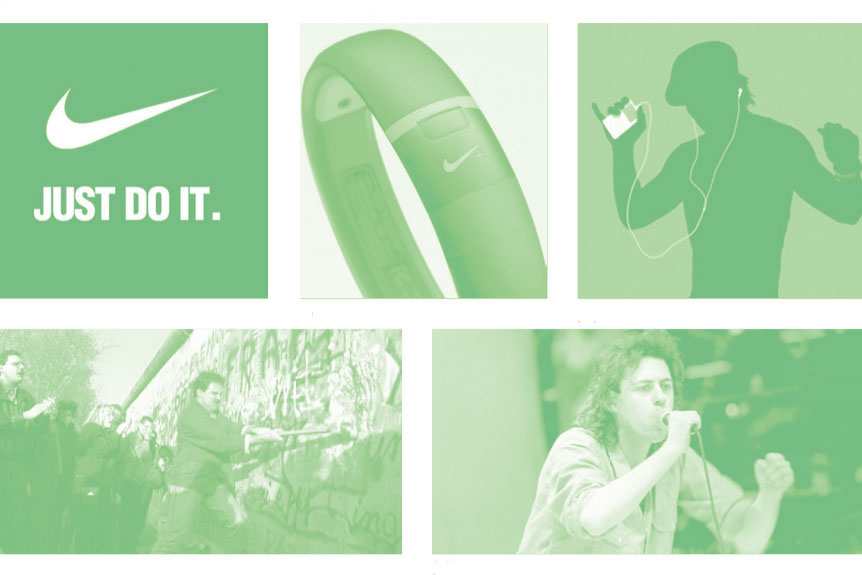 With emotions increasingly commoditised, the smarter brands begin to see that innovation can happen on a cultural level too. Recognising historical and social shifts allow the bolder players to shake up the cultural conventions of their categories and embrace all-pervasive "ideologies" that are far bigger than the product.

Nike sees US society heading away from the cosy, soft conventions of the postwar era and its fondness for team sports – and recognises the rise of the tough, empowered, individual athlete (and, by athlete, it meant anyone with a body).

Apple, with "1984" and beyond, embraces the growing, disruptive creative counterculture around technology – strictly in opposition to the corporate, mainframe-slave regime of the big office. Dove sees the massive opportunity created by the backlash against Photoshopped models and champions "real beauty".

But even a compelling ideology can’t compete with the transparency of the internet. This increases people’s knowledge and pours fuel on to an emerging trust issue with corporations.

This is the era of Princess Diana, Aids and growing globalisation. People begin to witness global events as they happen, such as the first "televised war" in the Gulf, thanks to the rise of the rolling news machine. The Los Angeles riots, OJ Simpson’s car chase, Nelson Mandela’s walk to freedom, Tiananmen Square and the fall of the Berlin Wall are watched by a generation, live on air.

The age of audience 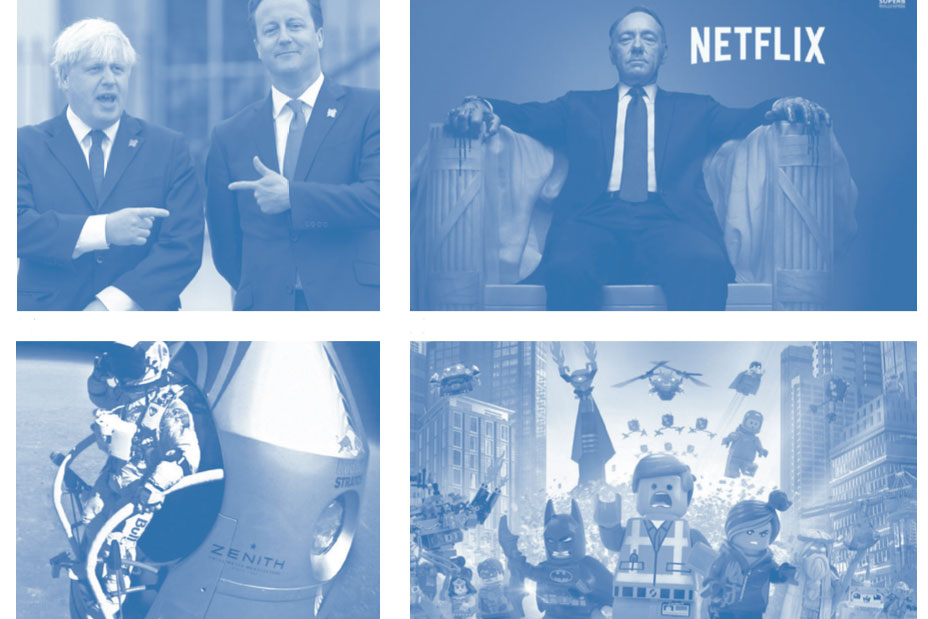 Advertising today is received on an audience’s terms, not a brand’s. People are as likely to be found within niches that reflect their interests and passions as they are in mass culture events. And they will dismiss the unwelcome instantly.

Winning brands will have the humility to respect the culture of the audience they try to reach, connecting with its makers and influencers, and making an actual contribution. It is only once a brand is accepted as belonging in a context that it can think about creating a mass cultural moment in the way Red Bull Stratos did.

As the age of the audience unfolds, expect about half of advertising to be paid for and the rest to be distributed by its audience or living on platforms created in popular culture. Gaming, social-influencer networks, branded content and native ads need to be able to play in all these contexts and more. And new technology – virtual reality, artificial intelligence – is becoming available that will create other arenas in which brands will reach audiences.

The world of marketing has been turned on its head in a matter of moments – but it is not alone. The music, film and publishing industries are experiencing the same transformation and are emerging strong. It’s just that the industry captains have changed, thanks to the age of the audience.

Zaid Al-Zaidy: The diversity prize is a great one but are you ready for it?