The findings of the industry-wide “All In Census” have revealed the demographic make-up of the UK ad industry and prompted an immediate action plan to improve diversity, equity and inclusion.

The results of the advertising industry’s first “All In Census” are in and show urgent improvements are needed to boost representation of black, disabled and working-class talent.

The landmark survey of more than 16,000 professionals, believed to be just under 20% of the UK advertising population, was run by Kantar on 10 March on behalf of the industry’s Inclusion Working Group, made up of the Advertising Association, ISBA, the IPA and other leading organisations.

It is the first time that individuals from all parts of the industry from brands, media owners and agencies were surveyed at this scale.

The findings, particularly around black, disabled and working-class representation, require an immediate “action plan” for the industry to make changes, Kathryn Jacob, chair of the Inclusion Working Group, said.

Across all respondents, 83% believed their company was actively taking steps to be more inclusive. However, mental health was a problem across the workforce – 31% said they were stressed or anxious. The figures were higher among women (36%), 25- to 34-year-olds (38%), LGBTQ+ (45%) and disabled people (51%). 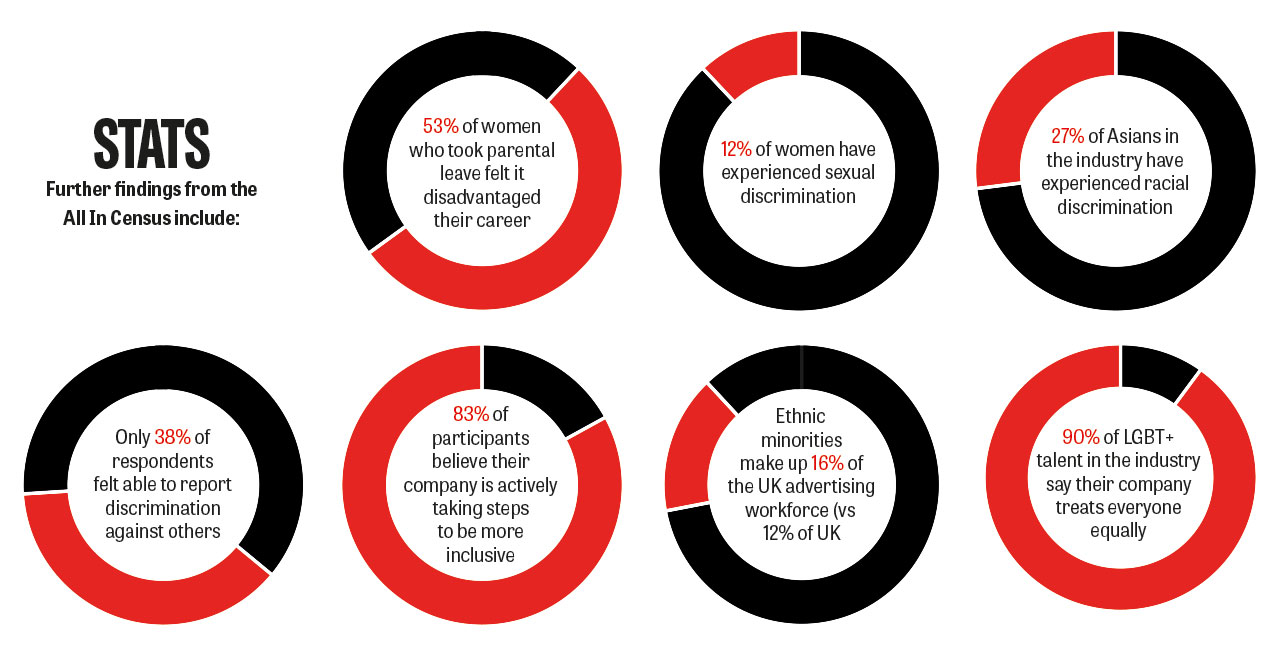 After assessing the data, the Inclusion Working Group has identified three areas it wants the industry to tackle first: improving representation among black, disabled and working-class talent.

Jacob said: “It is now time for action. Our census results have provided the benchmark data we need and the way forward is clear. We urge all companies in our industry to engage with the All In Action Plan to help make rapid progress on these critical areas.”

Those three areas are:

The All In Census shows just 1% of black talent is in C-suite positions; across the general UK population, it’s 3%. To improve black representation, the action plan urges people to download and adopt the nascent BRiM framework.

Not only is disabled talent underrepresented but the census also revealed that people in this group were more likely to leave their organisation (22% versus the industry average of 9%). To help, the action plan urges the immediate audit of company’s websites to ensure full accessibility online.

People whose parents had professional backgrounds are significantly overrepresented in the industry (63% versus a 37% national average). In addition, 20% of UK advertising professionals attended fee-paying schools versus a national average of 7%. The report encourages the industry to implement the Social Mobility Commission’s Toolkit for the Creative Industries, which launches later this month.

Sharon Lloyd Barnes, commercial director and inclusion lead at the Advertising Association, was keen to stress that, although these are the first areas to tackle, the Inclusion Working Group is liaising with experts to create actions for other marginalised groups by the end of the year.

Jacob, who is also chief executive of Pearl & Dean, said: “It is like  a film franchise. This is our first release, but we’ve got more to come.”

The considered approach is to ensure the group drives systemic and long-term change, rather than opting for easy wins.

“We want to suggest credible actions that will genuinely drive change,” Jacob added.

Although the industry has made progress on improving its pipeline of diverse staff, Lloyd Barnes said adland needs to get its house in order so that these new recruits are properly valued and supported to reach the top.

“We need to recruit, support and promote talent at every stage,” she explained.

To encourage swift action, the group has introduced a process for any company wishing to declare publicly that it is an All In Company. They will be asked to provide evidence they have implemented the three actions, in return for materials which can be used in company credentials.

The All In work has sparked the attention of the global advertising community as well as other business sectors in the UK.

The World Federation of Advertisers, backed by Campaign and Kantar, will launch an adapted version of the All In Census over 27 countries later this month - the first global diversity survey of its kind.

Meanwhile, the Inclusion Working Group has also been approached from people working in other industries about how they could implement the same type of programme.

All these changes are important to retain talented people and future proof the industry by attracting new faces. “If we want people to stay in our industry, it needs to become more human-shaped rather than business-shaped,” Jacobs said.

“We are now in a global fight for talent. People are our biggest asset. We need to start treating them like that, rather than having a system that squashes you like a pancake, so you are all like cookie cutters,” she added.

Lloyd Barnes said this is particularly important after the Covid pandemic: “The experience we all just went through has made us more aware of our colleagues in a more human way, understanding what they are dealing with in their home environment.”

Jacobs said: “We have got to create a more inclusive workplace. This is the start of us becoming an industry we would be happy for our children to work in.”

Caroline Dinenage, the culture minister, welcomed the All In Census as it “can help further improve representation across the advertising landscape and build on the work done to date on inclusion in the creative industries”.

Growth, but not at any cost