Almost half of people in the UK do not know that Google and other search engines make money from advertising, an Ofcom report has revealed.

Ofcom’s first Online Nation paper reported a "widespread lack of understanding about how search engines are funded", with 46% of people unable to name advertising as the medium’s source of income (18% gave an incorrect response and 28% said they did not know).

Almost all UK users (97%) use Google for internet search, while only 14% use the second most popular search engine, Microsoft's Bing.

Advertising is the primary source of revenue for most online sectors and online ads generated £13.4bn in the UK last year (up 13% since 2017), accounting for more than half (57%) ot total UK ad revenue. 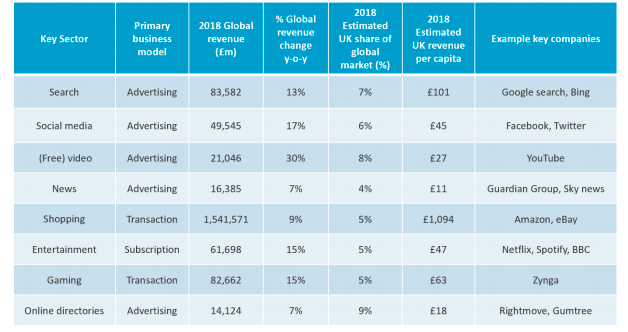 Google and Facebook together generated an estimated 61% of UK online ad revenue last year, the report said. Their websites are the most visited by adults in the UK, but their share of revenue is far greater than time spent (35%).

However, Facebook use is declining in the UK, the report said, despite overall social media use remaining high. Facebook is still the largest social media site in the UK in terms of reach, consumption and revenue, although its use has fallen in the past two years (from 95% of social media users in 2016 to 88% in 2018). 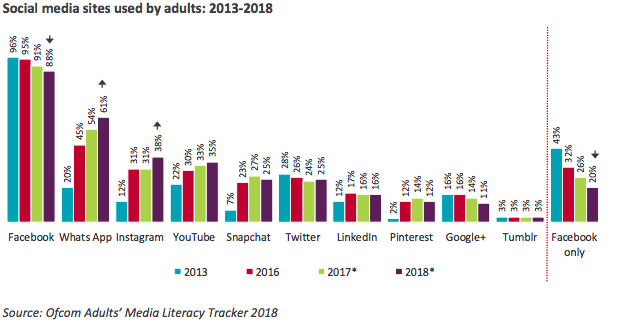 There is also an increase in people using multiple services: 20% of social media users only used Facebook in 2018 (down from 32% in 2018). However, users spend much more time on that platform, at an average of 23 minutes a day per user, compared with about nine minutes on Snapchat and five minutes on Instagram, and 74% of Facebook users check it at least once a day.

One in eight people (13%) in the UK do not use the internet – a segment of the population that has remained unchanged since 2014. The main reason for not going online (cited by 47% of those polled) is the perceived lack of need for the internet.

From LGBT+ rights to gender in the workplace: LinkedIn's diversity trends revealed

EE launches 5G with Stormzy gig on a floating stage

Facebook's pivot to privacy will make data more powerful than ever

The first year of GDPR saw the carrot; next comes the stick

More than half of Ireland's GDPR probes are related to Facebook