A band of pro-EU campaigning groups have joined forces to create a Leave.EU parody ad holding the Brexit elite to account.

An anti-Brexit guerrilla group Led By Donkeys has joined forces with young people's vote campaigners For our Future's Sake and created a parody of the infamous "Breaking point" campaign by Leave.EU.

The UK has reached "Breaking point", the new poster tells us. "The Brexit elites have failed us all... The UK is being swamped by a tide of incompetents."

The ad is a play on the Leave.EU bus-side poster of 2016, lampooning its anti-migrant rhetoric with a dig at the self-proclaimed anti-elite Leave campaigners. The brainchild of then-UKIP leader Nigel Farage, the original ad featured an image of a large procession of what are supposedly migrants preparing to invade the UK's shores. "We must break free of the EU and take back control of our borders," the copy read. 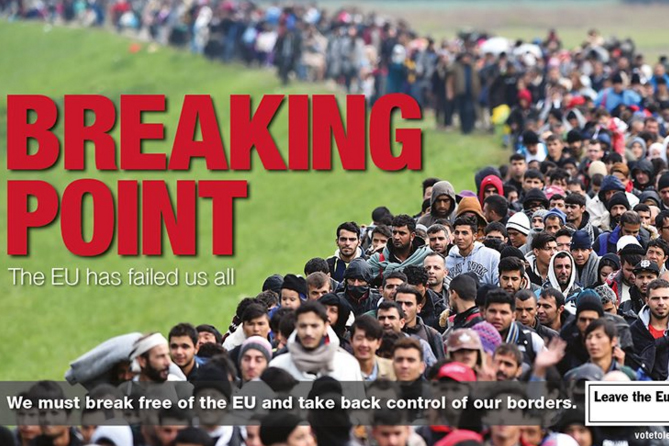 The new poster will even be displayed using the same ad van employed by Farage for his 2016 campaign. It will be publicly unveiled this morning (7 March) at 10am at Smith Square in Westminster.

The bodies said they had come together to "hold to account the Brexit elite who have failed us all", and will be joined by Remainer Now to support a people's vote.

Jason Arthur, co-founder of For our Future's Sake, said: "In 2016, the Brexit elite whipped up a false crisis against migrants to convince the country to vote to leave the European Union. We've always been clear the main crisis in our country is the sheer incompetence of our political leaders, who we now know are betraying Leave and Remain voters alike – and are unable to take our country forward.

"As the real costs of leaving the EU become clear and the crisis continues, it's only fair to demand a real say with a People's Vote. That's what hundreds of thousands of people will be demanding at the 'Put it to the People' demonstration on 23 March."

Earlier this year, the Department for Exiting the European Union was mocked after it refused to send out copies of its no-deal Brexit ads to media including the BBC. The campaign included a radio ad featuring people asking how leaving the EU will affect them. The ad was all tease – no answers were given.

The 25-year-old behind Vote Leave's ads

Lessons to be learned from the Brexit ad war

Wherever you stand on the EU referendum, make your voice heard