As more cynically-minded consumers batten down the hatches against the deluge of Valentine-themed marketing mush raining down ahead of the 'big day', we decided to snatch Cupid's arrow mid-air and take a stab at the flatulent notion of true love.

It's Valentine's Day this coming Sunday and already marketers have pounced on the theme to persuade consumers to buy their wares.

To name a few examples: there's been Tesco's shopping-basket-psychology singles-matching campaign; Marmite's run of personalised limited edition 'pot of love' jars; and House of Fraser's launch of an emoji-based campaign called 'emojinal' (just don't mispronounce it). Then last year, we revealed that Rolo's 'Do you love anyone enough to give them your last Rolo?' campaign was voted the most romantic ad ever. Awww...

But enough. Marketing rejects sentimentality and instead embraces the tension and ugliness at the heart of the human condition.

Here are some campaigns about breaking up, ads featuring couples arguing and tech that helps you finish with your no-longer loved one.

Hopefully they'll act as an antidote to the saccharine and schmaltz of Valentine’s Day.

Sergei, the bespectacled de facto servant to Comparethemarket’s Aleksandr, is forced into a decision that may surprise many.

"I have a hot date," Sergei proclaims in the appropriately named 'Hot date' ad.

"Ha. Ya, with my ironing board," Aleksandr says, before opening the front door to none other than Nicole Kidman and the synth stabs of Take My Breath Away.

But the drama mounts as in the next ad in the series, Sergei is forced by Aleksandr to choose. Him or Kidman.

With the help of the Great British public, the decision is made. Kidman is dumped and "Sergei choose Aleksandr". 21,507 consumers voted for Aleksandr and 17,489 for Kidman on a poll.

Hollywood actor Ashton Kutcher is embroiled in a messy break up after his ‘other half’ has outstayed her welcome, in a neat piece of self-parody.

But the parting of ways is not with a girl, but a greasy-looking slice of pizza, in this TV ad for Wrigley’ Extra chewing gum. It is only once he turns to the freshening powers of Wrigley’s that he can begin feeling fresh again.

The gum brand also used Antonio Banderas in a similarly-themed ad, in which he dumps a doughnut and her pastry entourage.

This 2005 TV ad is not so much about a breakup as it is about a horribly argumentative young couple.

It’s a weird choice of scenario for the brand - surely financial services marketing should gently cajole, rather than subject viewers to a bout of word-slinging that would put to shame a particularly abrasive scene from Eastenders.

Unfortunately, we couldn’t embed the ad, presumably because it was deemed so obnoxious. View it here.

"It's over, Brad," declares an American woman, before sinking into a miasma of self-pity and stay-at-home Netflix addiction. But help is at hand.

"When you love your friend, but hate her ex, get her Heart Break Manservant," says the ad’s chirpy voiceover.

The lonely woman is then joined by a series of good-looking, chivalrous types, who see to her every whim.

"This is a real service," the ad insists. And it is.

Check out the company website, and book yourself a manservant.

Broken up with your boyfriend or girlfriend but don't want to 'defriend' or block them on Facebook? Why the hell not?

Anyway, if you're so inclined, Facebook launched a trial service that gives users the option to see less of their former partners, or fewer of their updates.

When someone changes their relationship status, they will be presented with options along the lines of "See less of X. See X on Facebook only if you visit his profile." 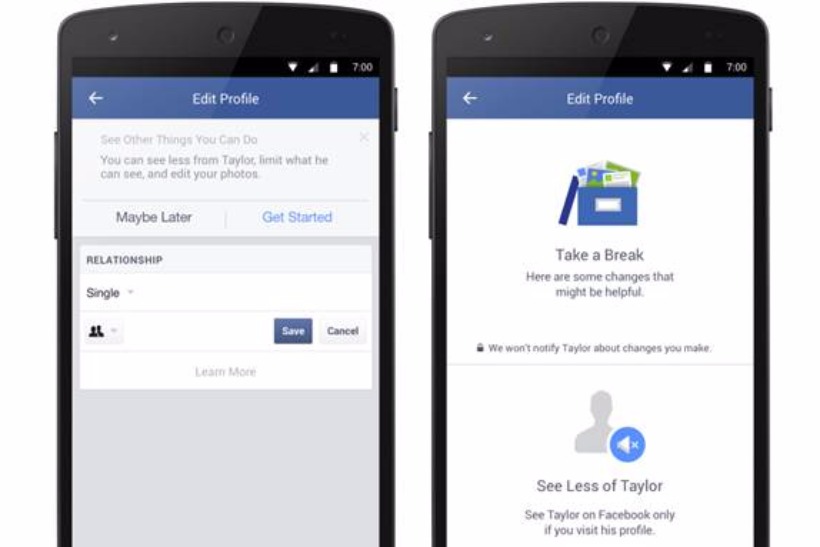 If you’re finding it too painful to break up with someone, or if you just don’t have the balls, there are a number of breakup services available.

For instance, The BreakUp Shop allows its customers to let their partner know they are no longer their partner indirectly, via text, letter or even in a premium offering that delivers the breakee a bunch of flowers.

Recipients can also be sent a Breakup Shop box containing 'Gifts for exes', a package that can be repurposed as a "memory oven" into which old photos etc. can be packed before it is set alight.

There are similar services, including breakup outsourcing company Sorry It's Over.

Advertising as a breakup medium 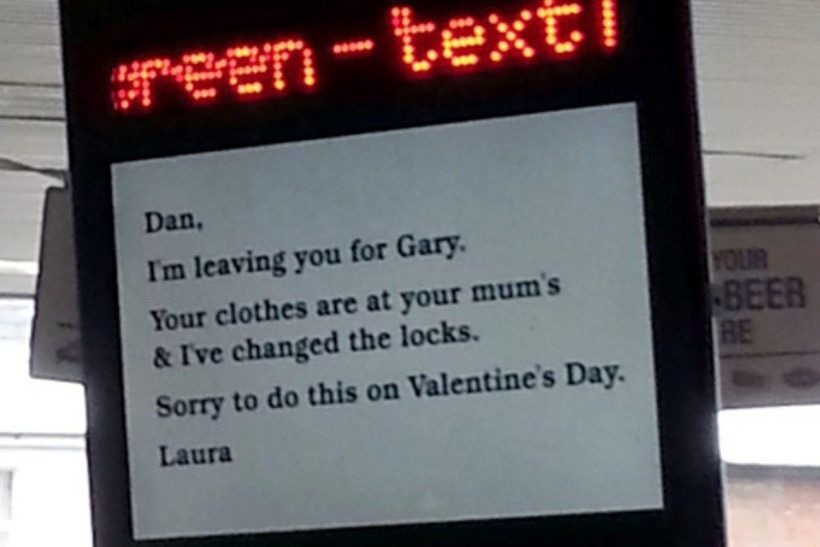 A girl called Laura used the power of advertising to break up with her boyfriend, buying space on a digital display at an Esso garage in Manchester. What a class act.

The billboard declared: "I’m leaving you for Gary. Your clothes are at your mum’s. I’ve changed the locks."

This was followed by an apology, of sorts.

"Sorry to do this on Valentine’s Day."

In 1987 Volkswagen released its seminal ‘Changes’ TV ad, directed by photographer David Bailey. With hindsight, it appeared to foreshadow the divorce of Lady Diana and Prince Charles nearly a decade later.

The ad starred model Paula Hamilton, who was dressed and made up to resemble the then Princess of Wales. She is seen leaving her husband, posting her wedding ring through the letterbox, throwing away a brooch and fur coat, but keeping hold of her Golf car keys.

"If only everything in life was as reliable as a Volkswagen," the slogan concluded.

VW also ran another ad several years later, with a similar vibe to 'Changes'. This time it featured a woman apparently in wedding garb embracing well-heeled types at a celebration. A confetti-wielding granny even makes an appearance.

But there’s a twist. As she drives off in her Golf GTi, the words "Just divorced," are seen on a sign on her rear bumper.

This ad features a reconciliation, but it's a stylishly-shot, moody and typically brilliant Guinness film, and it happens to star Michael Fassbender. The actor pouts and storms his way from England, swimming across the Atlantic and striding through New York, to a bar, where he makes up with his BFF.

Here’s another ad from Diageo. This time for Smirnoff Vodka.

After barely avoiding a nasty collision with a truck, a couple’s car swerves off the road and parks at a viewpoint in the Hollywood Hills.

The man removes his wedding ring. "I know you had an affair with Dylan," he says. "I don’t love you anymore."

But that's not it - viewers were able to manipulate the ad's outcome through the power of technology. The ad only revealed the brand and each sequence if the viewer pressed the red button on their TV remote (this is in the days when digital TV was sexy and new-fangled).

With each press, the action glitchily replays, with edits clipping the man's words so that he says: "I had an affair. I don’t love you."

The third and final sequence has him simply say: "I love you," as he hands her the ring.

We nearly ran an ad for Apple but then decided to opt instead for this pastiche of an Apple ad by comedy site College Humor. It depicts the breakdown of a couple, with voice-recognition app Siri awkwardly caught in the middle. It features some colourful language, so be warned.

This week saw the launch of ads using Valentine’s Day faux pas in a series of vignettes, including a man who says: "The last time I had mussels...Both ends."

There’s an awkward silence before he orders. "I’ll have the mussels, please."

Here ends Marketing’s celebration of the less salubrious aspects of love, friendship, romance and co-habitation. For those singles still seeking solace, or indeed content with their singleness, here’s a Reddit thread that might help:

What the rise of voice search means for marketers

Like garage flowers, marketers should delay Valentine's Day campaigns to the 'last minute'

Marmite jars to carry declarations of love for Valentine's Day