Something you may have missed thanks to all the excitement over Homepod.

With Apple’s Homepod stealing the press following WWDC, it’s easy to miss some of the quieter innovations, but those little one liners can have huge – and hugely beneficial – impacts. When Tim Cook took to the stage at the Apple Developer conference last night to announce a flurry of updates to the Apple Watch, one which got the attention of investors was the name drop of health company DexCom.

Cook announced native core Bluetooth. It might sound a lot like jargon, but what it means is that third party hardware, like the DexCom owned constant glucose monitoring system for ambulatory use by people with diabetes, can communicate directly with your watch. 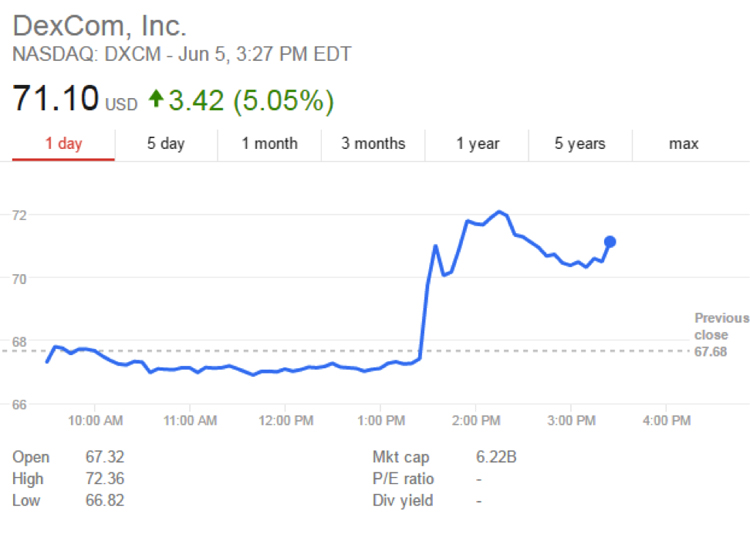 Based out of San Diego, California, DexCom is a leader in continuous glucose monitoring systems for diabetes management.

The company’s latest platform, the G5 Mobile CGM System, provides constant real-time glucose readings every five minutes and is the only FDA-approved CGM system that does not require pricking your finger. The integration means that data can communicate directly with your watch, rather than needing to go through a middle-man transmitter as it does at the minute.

But why is that a big deal? For two reasons:

Firstly, it puts diabetes sufferers in constant and immediate access to their glucose level, reducing the risk of dangerous hypoglycemia or hyperglycemia while alarms can let you know when you need to react to a change in your glucose levels. This can not only prevent either extreme of a very high or very low glucose levels, but also prevent the need for hospital stays and treatment.

Secondly, the soar in their share value indicates the increased commercial value of connected health. If you read Mary Meeker's 2017 report released last week you'll be aware that consumer behaviour is shifting. 25% of Americans own a wearable device, up 12% year on year since 2016, a trend indicative of our eagerness to view, consume and use all of the data available to us to manage our own health.

It seems like any data point is of value (both emotional and commercial) to the connected consumer who wants to know exactly how their body is behaving. And interface innovations - like that being made by Apple - are huge enablers of this type of transformative tech.

And not only on a personal level are wearables demonstrating huge value. The tools intrinsically promote healthy habits, thereby minimising the need for costly hospital stays and treatments, meaning that we can stay healthier and fitter for longer.

In the current political climate, when we’ve never been more aware of the cost of ill health, that alone makes this an innovation well worth noting.

How can agencies rediscover their swagger?

Apple envisions a world without apps for WWDC 2017

Hilton tops Logo's annual ranking of 'out and proud' brands