In the last two months, the Apple Watch has dominated the conversation around wearable technology and Internet of Things devices, racking up two million mentions across social media.

Adobe Digital Index (ADI) looked at social media mentions around IoT devices over the past 60 days and found that the Apple Watch, FitBit fitness band, and Google onHub smart router had the most social buzz.

Average sentiment for those devices is 60% joy, admiration, or anticipation. "It’s a really positive sentiment," says Joe Martin, senior analyst at ADI. "People are enjoying this new age that we’re living in where everything is connected. Having data behind that can improve and make life easier for both brands and consumers." 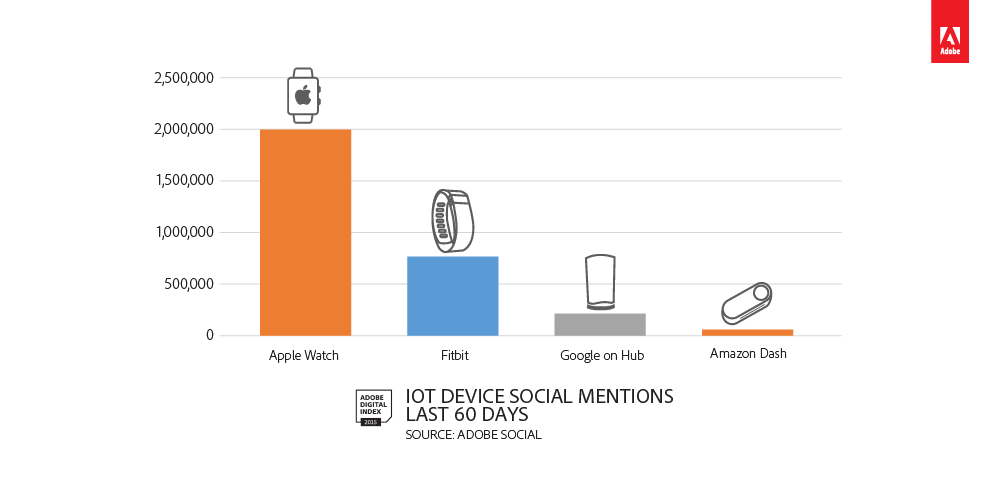 Internet of Things devices should be at the forefront of marketers’ minds, with consumers increasingly adopting related technology such as wearables. "Marketers are talking about the Internet of Things, but they’re not sure what it means to their business yet," says Tamara Gaffney, principal analyst at ADI.

"Social buzz volume and sentiment indicates that IoT is going to grow—and grow fast," she adds. "The most important marketing facet will probably be less from the promotion side of marketing and more from the standpoint of product strategy, which marketers also do; we forget about that sometimes. Watching IoT buzz and taking a look at the sentiment and the amount of traction that certain new devices are getting is really helpful for marketers to understand how to change and shift their company."