And Marketing's live blogging about it now now now! 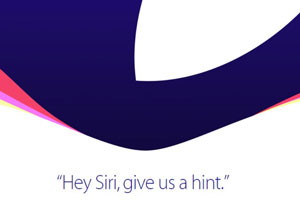 Siri is useless – it can't help you figure out what Apple is announcing, but Marketing's Apple iPhone 6s live blog can distil the news as it happens, in handy webpage, text format. Whose commute just got more interesting? Yours.

Instagram is opening up to all sizes of business and rolling out to all markets by the end of month, Campaign's Gurjit Degun reports.

Instagram has also launched new features for the app including a landscape format for images and videos. Advertisers will also be able to make use of 30 seconds for videos instead of the 15 seconds currently available, and Instagram is pushing the marquee feature for brands too, which encourages one-day campaigns around a product launch.

Three different ads are dropped into the feed at various times of the day.

The high profile marketing director Craig Inglis has been given the role of customer director. Inglis will continue to be responsible for marketing and customer insight but his role now incorporates end-to-end customer experience.

The change also means Inglis will join the board, expanding the senior management team's marketing expertise. Fellow boardmember buying and brand director Paula Nickolds is being promoted to commercial director.

Read on for more changes to job roles at John Lewis, which essentially come down to mastering the omnichannel experience. Spary, in a follow up post, looks at the trend of companies adopting the customer director role (Tesco, Asda and British Airways have all done it) and gets industry experts to weigh in.

Here's what Marie Anderson, director at Maran and former trading and channels insight at Sainsbury's, had to say:

I think that the rise of the customer director – or chief customer officer as they call them in the US – is long overdue in the UK. Customers in an omnichannel world have high expectations of brands. They expect propositions to be built around their needs and expect businesses to deliver this seamlessly across all channels

A complaint against a national press ad for Paddy Power was rejected by the Advertising Standards Authority (ASA), which ruled it was "unlikely to cause serious or widespread offence", Campaign's Michelle Perrett reports.

The ad, created by RPM and Paddy Power's in-house team, which appeared in the Sport section of The Guardian, featured odds on the candidates for the 2015 Fifa presidential election.

Our favourite part of this case is that the ASA took into account Guardian Sport's potty mouth.

The statement read, in part: "We noted that the ad appeared in the Sport section of the Guardian, which we understood had an adult readership and frequently contained swear words."

Click on through for details on the original complaint, Paddy Power's defence and more from the ASA's ruling.

And we'll leave you with this infographic from The Wall blog. Research by Teradata research suggests that the UK’s top 50 online retailers (by turnover) are missing out on opportunities to incentivise shoppers through mobile applications.

TV advertising: It can turn 'average petting' to 'below par foreplay'

Ever wondered who coined the term 'brainstorm'?