A feature designed to protect user privacy may damage Apple's government relations in the future. Examining the tech company's role in exacerbating internet censorship, and the commercial cost of ethics.

Apple's latest privacy feature is further splitting the company in two, as it is forced to make difficult decisions about whether it can fulfil its mission as a privacy leader and protect its global reach and revenue. Its decisions could deteriorate its position in the future, if governments see it as a company that can be controlled.

The iPhone maker announced a string of additional privacy protections for users at its annual software developer conference last week, including a feature designed to obscure a user’s web browsing from internet service providers and advertisers.

The ‘private relay’ feature strips IP addresses from web traffic, instead assigning a temporary IP address to users. It is designed to tackle non-consensual tracking techniques such as ‘fingerprinting’, and prevent advertisers from using IP addresses to pinpoint a person’s location. Google is working on a similar feature called "Willful IP Blindness".

Apple has said that this feature will not be made available to users in 10 markets: China, Belarus, Colombia, Egypt, Kazakhstan, the Philippines, Saudi Arabia, South Africa, Turkmenistan and Uganda. Most of these markets surveil and censor the internet, as well as banning the use of technology such as encryption or virtual private networks (VPNs) that inhibit their ability to do so. If Apple wants to continue to operate in these markets, it has to tailor its services. But by doing so, spectators believe it is undermining its core belief that "privacy is a fundamental human right". Should Apple market itself as a privacy-first business, while it supports governments that do not recognise an individual's right to privacy?

"Looking at the way Apple has successfully marketed privacy as a feature and service of its devices, it’s clear users value the privacy proposition. Apple’s move to limit privacy features in some markets opens it to criticism in other markets by regulators, competitors and consumers, who may believe that Apple is not fully committed to its privacy promise," says Joshua Lowcock, global brand safety officer at UM Worldwide. "Or worse still, [it could trigger] every country demanding some form of concession from Apple in security or privacy—citing other markets as a precedent," Lowcock opines. 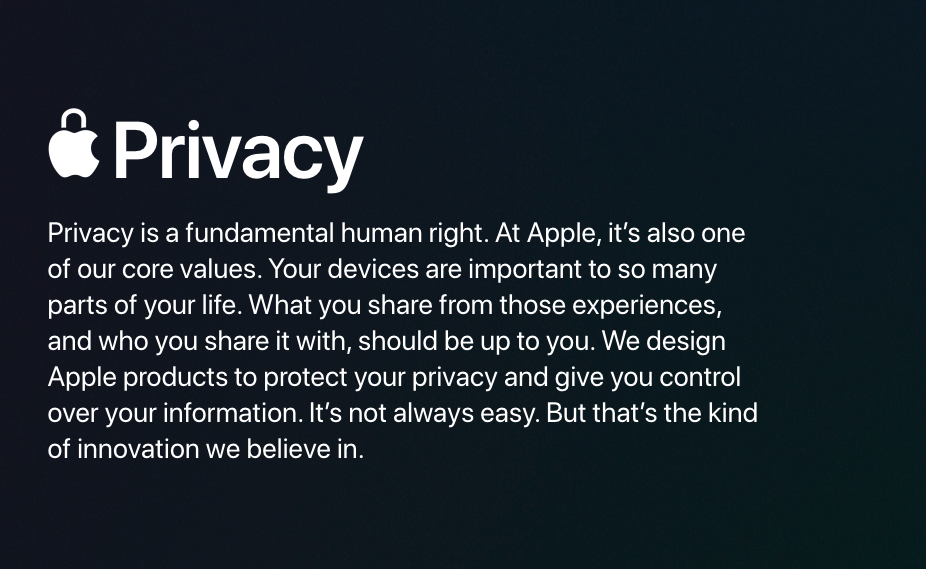 Apple has made several concessions in recent years that have clashed with its core values and drawn criticism from privacy advocates. The most prominent examples have been in China, where it has migrated all user data to a state-run cloud centre, essentially giving authorities access to its data through the country’s legal system. It has also removed VPN apps, and some podcast apps and RSS feed readers from its App Store in China following government demands.

In the throes of the pro-democracy protests in Hong Kong in 2019, it removed an app that was being used by protesters to organise and track police movements, as well as a reputable news app that had written extensively on the protests, amid pressure from Chinese state media. Such moves placed it in the centre of complex geopolitical tensions between China and the US.

At the time, the leaders of both markets were imposing trade tariffs on one another that was eating into Apple stock. Apple is especially vulnerable to trade tensions, because it relies on China both for the assembly of its products and for almost 15% of its revenue.

While facilitating censorship in Hong Kong directly opposed its stance in the US, its home market, Apple "clearly does not want to risk its massive China business for the sake of a single app", corporate affairs expert David Wolf said at the time.

But Wolf, who is the managing director of Allison Advisor, warned that Apple could suffer "irrefutable damage" to its reputation if it continued to compromise itself to protect its business in China, its third-largest source of revenue.

"Apple sees itself trying to navigate between the US and Chinese regulations," Dan Steinbock, an expert on international business relations and the multipolar world, says. "If it ignores US views, it will face increasing pressures in America where it makes most of its money. If it neglects Chinese views, it risks marginalisation in its pivotal foreign market. Moreover, if US decision makers pressure Apple too hard, they risk destabilisation in the US equity markets, in which the company has a great weight. Conversely, Apple's activities are seen as important not only in China overall but in Guizhou, a minor province, where its investments into the database do matter."

"In the early 21st century, commercial success requires both global effectiveness and local responsiveness," Steinbock adds. "It's not a matter of one or the other, but the balance between the two."

Belinda Barnet, a senior lecturer of media at Swinburne University, does not believe Apple's decision to offer reduced privacy protections in some markets is in the best interest of users, but the alternative is a sacrifice few for-profit companies would make.

"We cannot expect tech companies to fight sociopolitical issues created by the CCP," she says. "China currently has a mass surveillance system in place, and Apple’s privacy changes would have gone against what the government desires: complete transparency on citizens. Either Apple changes its policies to please that government, or they’re out of the market.

"It would be good to take a stand against power, like Facebook did when it booted Trump off after the raid on the Capitol. But in some political climates that results in the government just banning or severely restricting products or brands."

As more countries seek to censor the internet, UM Worldwide's Lowcock suggests that platforms are getting nearer to major ethical and commercial dilemmas each day.

"Look at Twitter in India, with Twitter increasingly needing to make the call on whether they will stand by their principles and promise to users, abide by government demands or exit the market," Lowcock says. "That’s a tough choice to make, especially when you’re also accountable to shareholders."

Steinbock, who is the founder of global consultancy Difference Group, says it is important to acknowledge that Chinese tech companies face challenging political decisions when seeking global scale too.

"From the US standpoint, Apple is seen to make concessions in China," Steinbock says. "Yet, Apple and ICT giants remain welcome in China. In the Chinese view, all major Chinese ICT giants are expected to make major concessions in the US and few or none seem to be welcome in America, as evidenced by a decade of marginalisation efforts from Huawei to TikTok, the plunge of Chinese FDI in America, and so on."

Breaking the internet in two

This political climate is leading to a splintering of the internet: one part that protects free speech and an individual's right to privacy, and one that is controlled. Apple's decision to separate the services it offers by market "normalises the splinternet", Lowcock says , which could risk undermining the control it has over its services and significantly deteriorate the rights of individuals.

"The bigger risk on the horizon is not, like in the case of Apple, the absence of features or a service to abide by local laws, but the risk digital services and platforms can be weaponised by governments as tools of oppression and control," Lowcock says.

This is especially concerning as more countries seek to increase their controls over the internet. While the internet has been an important tool for democracy, providing citizens with unfettered access to information, this has been "derailed significantly" in the past two decades—particularly since September 11, 2001 and in the name of "national security", Steinbock says.

"The net effect is that today national security is increasingly evoked by governments in presumably commercial interventions," he adds.

Both Steinbock and Lowcock believe there is an "urgent need" for multilateral cooperation on privacy— to protect the free flow of information and the rights of individuals, while also giving governments and law enforcement the appropriate oversight capability.

"The data-transfer challenges between the EU and the US as a result of GDPR are evidence that even friendly nations are struggling to align on what should be straightforward terms," Lowcock explains.

"It underscores how global regulations and agreements have failed to keep pace with privacy, data, and the technology sectors. This is where leadership is needed from the G7, APEC, etc., to bring alignment on key principles around data, privacy and user rights; avoid the splinternet; and [reduce] the subsequent risk of adverse economic impact should platforms look to leave markets because compliance has become too hard."

"Governments can foster privacy objectives through multilateral cooperation, which unfortunately is today missing, due to trade wars and neo-protectionism," Steinbock says.