Under Armour is exploring options to build out its own media platform to rival Twitter, Facebook and other social media, as it looks to expand aggressively in Europe.

The sportswear brand has already made a play in digital fitness, with the multi-billion dollar acquisitions of fitness apps Endomondo and MyFitnessPal earlier this year.

Under Armour has racked up 140m users with its fitness apps, and CEO Kevin Planck hinted that the firm wanted to become the single destination for fitness via its UA Record app.

The challenge is, we’re a company of the future, so we have to take wearables to the next step, that’s what we’re working on for Europe

Now it wants to move beyond apps and build a unified platform that specifically connects its digital properties with advanced wearable technology.

"Our job is to make athletes better, connect and create a community that will improve their sleeping, eating, data and workout analysis and performance and recovery. Right now we’re working on how to activate that in the short-term and the long-term."

The firm is now looking beyond fitness bracelets to connected clothing with embedded sensors that can record an individual consumer’s data, and compare it with others doing the same sport. Marketing understands connected zippers is one idea being floated.

The idea is to make it much easier for athletes to capture performance data, beyond strapping an iPhone to their arm while running.

Carroll said: "Wearable tech is here, it isn’t new. The challenge is, we’re a company of the future, so we have to take wearables to the next step, that’s what we’re working on for Europe.

"It’s where our connected fitness platforms will be directly integrated."

He added: "Just imagine you had chips embedded into your apparel or footwear, for recording data, and also providing navigation. You could use [the data] for comparison purposes with other athletes. That’s the direction we’re moving in."

Under Armour is still mulling whether to hire in-house talent to build out its technology, or to try and acquire more fitness platforms.

Carroll said: "There’s an opportunity for us to own our own media and become part of the conversation.

"In essence, our partners, whether it’s Twitter or whoever, could be competitors very soon."

Carroll’s comments come as the brand moves to expand "aggressively" in Europe, where it remains behind rivals Nike, Puma and Adidas in terms of market share.

According to analysis from Repucom for Marketing, just 9.3% of Under Armour’s $3.1bn net revenue in 2014 came from outside the US. The firm doesn’t break down individual markets outside its home market.

By comparison, Europe accounted for a quarter of Nike’s $26bn net revenues last year, and more than 40% of Adidas’ $14.5bn net revenue.

Under Armour snatched the number two position from Adidas in the US sportswear market in January, according to data from Sterne Agee and SportScanInfo.

Carroll told Marketing that Europe was now Under Armour’s "priority" market, admitting that the firm had "a lot of work to do" to grow its share of the market.

He said: "We have an aggressive push to grow the brand outside the US, and the key international market is Europe. We’re extremely aggressive right now, driving the brand in the UK, Germany, France and the Netherlands."

In football, the firm sponsors Dutch footballer Memphis Depay, and is kit supplier to Tottenham Hotspur. The firm has also poached Andy Murray from Adidas. Carroll hinted further sponsorships will be announced this month.

Carroll’s comments came as the firm launched a marketing campaign in time for the Rugby World Cup, showing off its sponsorship of the WRU and other rugby stars.

The brand plastered a giant image of several rugby players across eight shipping containers floating on a 30m vessel on the river Thames.

The image showed the likes of Wales’ Leigh Halfpenny and England’s James Haskell sporting their Rugby World Cup shirts, ripped to show the Under Armour base layers beneath. 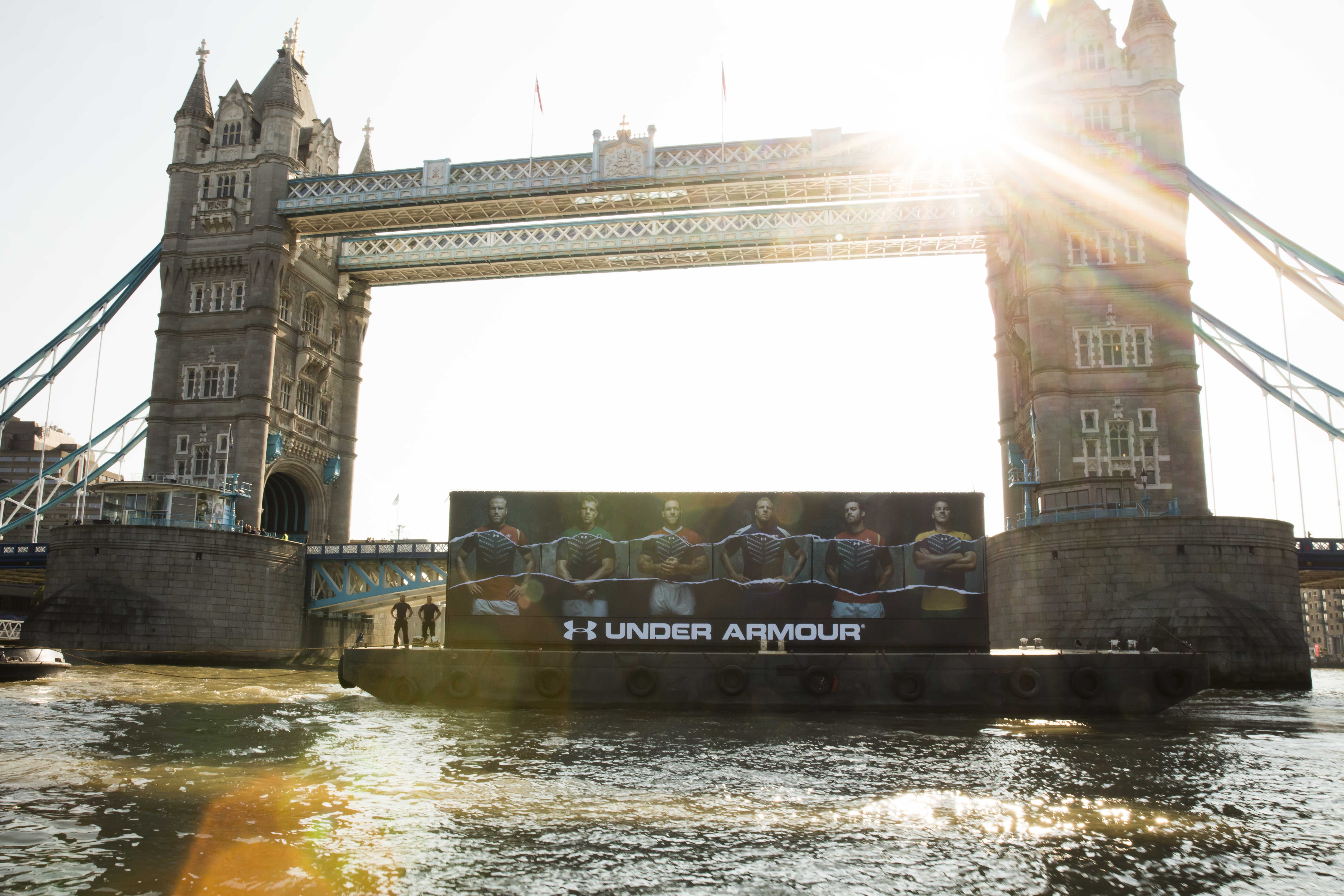 The containers took a shipment of base layers down the river to Twickenham Stadium, the main Rugby World Cup venue.

Since Under Armour is a team rather than a tournament sponsor, it’s limited in what it can do. But the firm’s cheeky activation on the Thames is just one example of the firm’s "underdog" mentality, according to Carroll.

He said: "We have this underdog, challenger spirit, which we clearly are. We’re a bit raw and real and as you see today, this [campaign] isn’t just about the world’s largest rugby event, it’s about the players and how they perform and recharge."

He added: "The values of rugby are very similar to the values of the Under Armour brand – a lot of hard work, a lot of grit. It’s not just telling athlete stories on winning. We’re not just a podium brand."

Under Armour creates an athlete army in 'Rule Yourself' spot