The Advertising Standards Authority (ASA) has rejected complaints from the Real Bread Campaign arguing that an ad for Allinson bread misled consumers.

The Real Bread Campaign complained that the used of imagery of bread dough being hand-kneaded under the heading "Allinson Today" would mislead consumers into thinking that its bread was made using methods employed by small, independent bakers, rather than industrial processes.

Additional copy read, "Happily, Thomas succeeded in his crusade to bring wholemeal to the whole nation and, while much has changed since those days, the bread still contains whole grain, still has no artificial preservatives and is still the mainstay of a nutritious diet".

The complainant argued the bread's claim that it "still has no artificial preservatives" would mislead consumers into thinking its bread had never contained them.

Allinson owner ABF Grain Products countered that the ad was part of a brand relaunch and designed to tell consumers the forgotten story of Thomas Allinson.

The images were meant to depict the Victorian age and not how its bread is manufactured today, it said.

It added that to ensure that the images were not misleading, the phrase "while much has changed from those days" was carefully positioned next to the hand-kneading image.

ABF confirmed to the ASA that there were no artificial preservatives in the bread, although the Real Bread Campaign pointed out that "Allinson brand loaves contain the artificial additive Datem, a function of which is to slow staling".

ABF stressed that the use of the word "still" in the campaign drew a comparison between the bread made in Victorian times and the bread made today and did not refer to the recipes that have occurred in the interim.

The ASA said it believed consumers would understand that the imagery – especially that of the hand-kneading – made reference to the company’s history and not its present day processes.

But Chris Young, campaign co-ordinator for the Real Bread Campaign, remained unappeased by the ASA’s ruling.

He told Campaign: "The fact is that a factory loaf manufacturer is using the imagery of a small independent baker and one that has played a large part in getting rid of tens of thousands of jobs."

"The ASA is supposed to be protecting consumer interest. But it's allowing a large manufacturer of factory loaves to lead associations in their mind that don’t exist. What hope do small bakers have?

"In what way is using photographs of handmade bread to advertise an industrial product untouched by human hand during its manufacture in any way honest or truthful?

"If consumers and small, independent local businesses can’t trust the ASA to protect them from misleading advertising, where can they turn?"

The organisation's opposition to the campaign has garnered the support of academics including Chris Hackley, professor of marketing at Royal Holloway University of London, who said: "Advertisers know very well that implied meanings are powerful, even if they are not literally believed by consumers."

Allinson had yet to comment on the Real Bread Campaign's claims by the time of publication.

The Real Bread Campaign’s action over the Allinson ad marks the third time that it has complained to the ASA.

It has previously challenged a Hovis ad, a complaint which was not upheld; and an ad for Tesco bread which claimed it was "Baked from scratch in our in store bakery", which fell foul of the ASA in 2010. 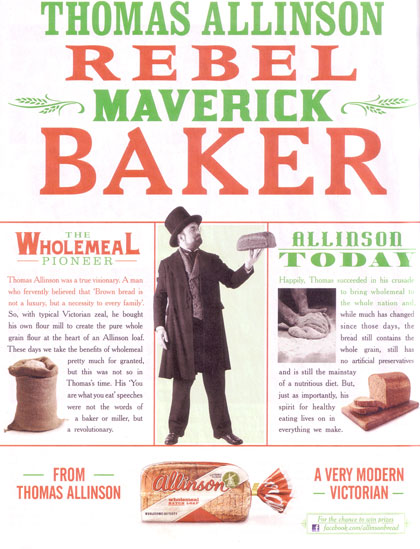 Allinson launches first TV ad in more than a decade