The head of UK marketing for Audi is aiming to protect the brand's premium positioning while repeating its 2011 success, writes Alex Brownsell.

The 900 metre structure, across which thousands of cars speed each day, was unexpectedly found to have eroded, raising the possibility of a collapse.

British automotive marketers will wince at the painfully obvious metaphor for their own travails over the past few years – the wobble, the sudden slow to a halt, the subsequent inability to regain speed.

Despite the wider malaise, Volkswagen-owned luxury car maker Audi has accelerated its performance, becoming the fifth-biggest-selling brand in the country, with a market share of almost 6%, leaving more mainstream names, including Toyota, Renault and Peugeot, in its wake.

According to the Society of Motor Manufacturers and Traders, the brand sold a staggering 14% more new cars in the UK in 2011 than in the previous year.

Part of its strong performance can be credited to the much-heralded launch of its A1 model, a small car intended to take on the likes of Mini.

Audi has also basked in the recent success of its R8 supercar, and is now primed for a fierce battle with arch-rival BMW, which it trails by a mere 0.15% in market share terms, for the crown of the UK's undisputed premium car marque.

Former Vodafone marketer Chambers, who joined Audi in July as a replacement for easyJet-bound predecessor Peter Duffy, is the man chosen to lead this charge.

He exudes the kind of quiet optimism one would expect from an individual who has spent much of his career at brands in growth, from guiding the UK launch of Japanese fashion retailer Uniqlo, to a two-year stint at LG Electronics as European marketing director.

The 46-year-old is not the only fresh face at Audi in the UK. Last month, it installed its Canada boss, Martin Sander, as UK managing director in place of Jeremy Hicks, who had been poached by ambitious Tata-owned manufacturer Jaguar Land Rover. Nevertheless, Chambers is confident the change in leadership will not hinder Audi's progress, citing the central role played by marketing in the UK operation.

"One of the surprises for me joining Audi is that there is a sense throughout the business of the importance of maintaining our reputation," he says. "It is far more ingrained than in FMCG, in my experience.

"The whole business understands how vital it is that the brand stays strong. I don't have to convince people about the importance of brand, whereas in other businesses, you still need to have those discussions about building an emotional relationship with consumers."

Chambers claims the basis of Audi's strength is its consistency when it comes to marketing, from the "long-term" outlook of its senior management, to its 30-year relationship with incumbent ad agency Bartle Bogle Hegarty.

A key strand of that consistency has been its long-running strapline, 'Vorsprung durch Technik', which Chambers believes must, if anything, become even more central to its activity. "'Vorsprung durch Technik' is the best-known slogan in the automotive sector by quite some way, but even though it's featured in our communications over the past few years, I feel it's become a bit recessive. I'm going to ensure it features more heavily and is a core part of the creative brief," he says.

Far from merely enjoying the fruits of others' labour, however, Chambers insists there is plenty of work needed to keep Audi on its upward trajectory. For example, despite high praise for the quality of the marque's advertising output prior to his appointment, he wasted no time in introducing a new creative theme, replacing its recent black and white ads with a more fantastical animated style.

The integrated campaign, for the marque's A6 Avant model, depicted a world inhabited by a metallic Audi hummingbird, which is able to nimbly fly among flora and fauna in the form of petrol pumps, road signs and traffic cones.

If strong sales are to be maintained, Chambers believes the brand must make sure it continues to produce memorable marketing. "The biggest challenge in advertising is to be recognised and talked about; the vast majority just washes over people," he says. "Clearly it's critical we get that investment right. BBH has done fantastic work for decades, but we need to ensure that our campaigns are fresh, move forward and connect with the customer. Consumers change, so the brand needs to evolve."

Despite the need to stand out, Chambers attacks those brands which put out overly "shouty" advertising, arguing it is those that discover a "creative spark" which will attract consumer interest. "People have over-analysed and tried to get too much data rigour around brand advertising, which, in the end, is a piece of magic, a creative spark," he says. "This brand does do things which, in the short term, don't have a return on investment, but in the long term produce results."

To that end, Chambers reveals that Audi will be increasing its investment in marketing this year by about 15%, including the roll-out of four major above-the-line campaigns and an increased focus on the digital customer journey.

He observes that, while car-buyers could once be expected to visit seven or eight dealerships before settling on a purchase, most will now visit only one or two, with the bulk of research conducted online. Audi's UK site attracts one million  unique visitors each month.

In response, the marketer promises to invest "what it takes" to make customers' online experience "as intuitive and fun" as possible, in many cases providing existing motoring enthusiasts with the content they demand.

"There is already a lot of activity (relating to Audi) online, so it is partly a case of facilitating that with more information, news and the ability to interact with the brand, as well as some specific campaigns to build excitement."

Nevertheless, customer experience can be more difficult to control in the automotive sector, and part of the marketing director's job is to herd the brand's dealership network in the right direction wherever possible.

Not every showroom will be as impressive as Audi's West London site, an environment that could easily be mistaken for a modern-art gallery. Yet Chambers is bullish on the matter, insisting he will keep firm control of the manufacturer's retail partners.

"It's critical we work closely with the network," he says. "We've invested a lot in property, with our 'terminal' dealership design concept. We do meet regularly with the network, and we're clear on what they can and cannot do. The dealers sometimes aren't always on-brand, and we will go around to rectify that. The vast majority (of dealers in) the network understand that."

As customer service assistants flit busily around the showroom with picture-perfect smiles, one is given a glimpse into the tight guidelines set by Audi in its effort to accentuate the feeling of a premium experience.

Yet, with sales growing at such a remarkable rate and Audis becoming more prevalent on UK roads, Chambers admits his biggest challenge is to maintain that sheen and prevent the damage that can occur when a premium brand enjoys mass success.

From a marketing perspective, that means investing first and foremost in brand-led communications, and being "very careful" about the kind of price-led print and TV advertising that has dominated the UK motoring scene since 2009.

It also means directing funds toward high-end experiential marketing, such as the company's 'Audi driving experience days' in the UK and overseas. "It's worth a lot if you can get owners into high-performance cars," argues Chambers. "People remember those experiences for months and years, and it helps them to buy into the brand."

His eyes are firmly set on the prize of becoming the "indisputable number one premium automotive brand" in the UK, just as the company strives to realise a similar ambition worldwide.

Although he acknowledges that the economy is "flat at best", he is confident that there remains a "desire for value and quality", on which Audi's continued growth can be predicated.

Momentum is certainly on his side, but as recent crises at brands such as Toyota have proved, the road to success is rarely straightforward. The threat of the kind of gradual erosion discovered at the flyover down the road is one of which Chambers must be constantly aware.

Family: Married with three children.
Hobbies: Food, wine, film.
Favourite car: Audi R8 V10. "I borrowed one for a week – it was amazing."
Favourite brand: Virgin Atlantic. "It challenges the convention of airline, and, hopefully, Audi challenges the convention of automotive."
Ambition: "Moving into general management at VW Group. We call MDs brand directors, the number-one responsibility is managing brands, so that's something I'd like to do."

The campaign: A Big Idea Condensed 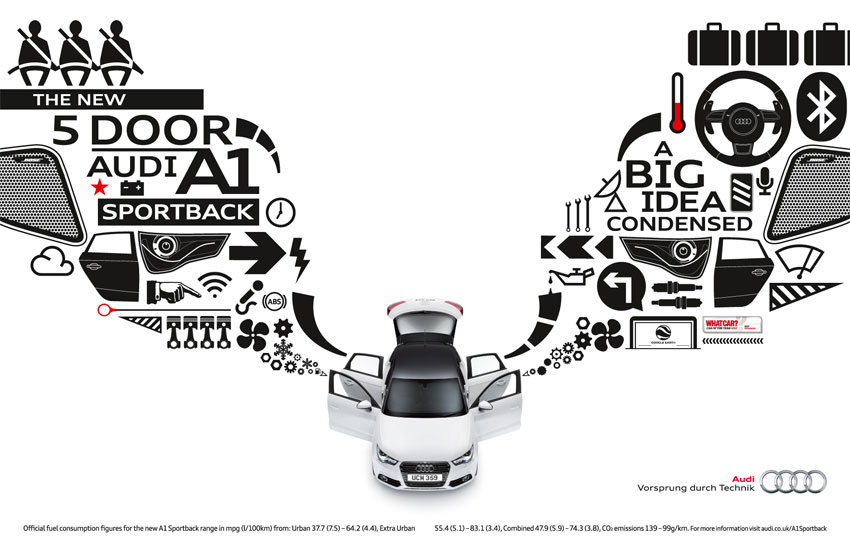 Audi has revived its 'A Big Idea Condensed' creative ahead of the launch of its A1 Sportback model.

The cinema and print ads focus on the amount of technology that is squeezed into Audi's smallest model, such as its Bose sound-system and Google Earth-powered satnav.

Cinema ads are running throughout Oscar season, with films including 'The Iron Lady' and 'War Horse'. Ads in the Financial Times, Daily Telegraph and Sunday Times magazines are designed to showcase the fact that the car has five doors.

An adaptation of the creative will also be used for digital display ads across key websites such as MSN, Yahoo, the Guardian, Elle, Grazia and Men's Health, while Audi has also invested in a bespoke iPad ad format.

VIDEO: Audi 'believes there is growth in the UK market', says Chambers

Is nostalgia the lazy option for brands when it comes to marketing creative? The Marketing Society Forum