British Airways is putting its short-haul network at the heart of its first post-Olympics marketing campaign, as it looks to stave off competition from budget carriers such as easyJet.

The campaign, created by Bartle Bogle Hegarty, emphasises the value of BA’s fares by highlighting the services included in its ticket price, such as baggage fees and breakfast, which is not the case for no-frills carriers such as easyJet and Ryanair.

The work, which follows the airline’s "Don’t fly" Olympics campaign, runs under BA’s "To Fly. To Serve." messaging. A series of four outdoor poster ads use a humorous tone to focus on the consumer benefits of flying with the airline.

The first shows a "friendly lemon" that customers receive in their complimentary gin and tonic, while the second shows a "happy jumper" that can be taken on holiday thanks to BA’s baggage allowance.

A third ad features a running shoe to represent a "relaxing stroll" through the airport, and the fourth shows a "buttery croissant" which is now part of BA’s breakfast offering.

The ads launch this week, with a subsequent TV execution breaking next Monday (22 October) during Coronation Street on ITV1.

Radio ads will play across the Capital Network, Smooth FM and XFM, while online sites MSN, Yahoo and the Telegraph online will house digital content.

BA will also push the campaign through its main social media channels of Facebook, Twitter and Google+.

Digital strategy and delivery has been handled by 12th Floor and media planning and buying handled by Zenith Optimedia.

Abigail Coomber, head of brands and marketing at British Airways, said: "'To Fly. To Serve.'  is about the entire BA experience.

So far we’ve focused on our heritage, the fun side of preparing for the London 2012 Olympic and Paralympic Games and the Games themselves with our ‘Don’t Fly’ campaign.

"Those ads have reminded a lot of people of what British Airways stands for. Now we want them to take another look at our shorthaul network with all the service they’d expect, at prices they may not." 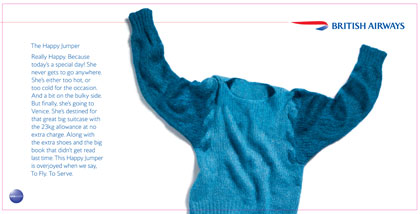 EasyJet signs up as official airline of Mobo awards

BA to say 'thank you' in flypast over Olympics parade

Brands at the Olympics: Highs and lows so far

Olympic sponsors deny being at fault for empty seats