When the coveted Balmain x H&M collaboration went live this month, most shoppers hoping to pick up a piece queued for hours outside stores, or hit F5 desperately on H&M's crashing site.

Within hours of the collection going on sale, popular pieces were selling on eBay for more than double the price. Early birds who had queued at stores also sold on their purchases to those waiting in line for a profit.

But queueing to scoop up limited edition collections could soon become a thing of the past as younger, digital savvy consumers find new ways to circumvent imposed scarcity.

This isn't the first time H&M has teamed up with a high-end fashion house for a clothing collection, but this might be the most hyped, millennial-friendly collaboration to date.

Balmain's designer, Olivier Rousteing, has friendships with high-profile celebs like the Kardashians and the Jenner sisters. He's prolific on Instagram at 1.6m followers - none of the other individual designers picked by H&M actually use Instagram in a personal capacity.

That might be why some more enterprising sellers turned to Instagram, rather than eBay, to flog their Balmain x H&M items, both real and genuine.

Rather than sit through a tedious eBay auction, buyers could approach Instagram resellers and make a purchase through a direct message. 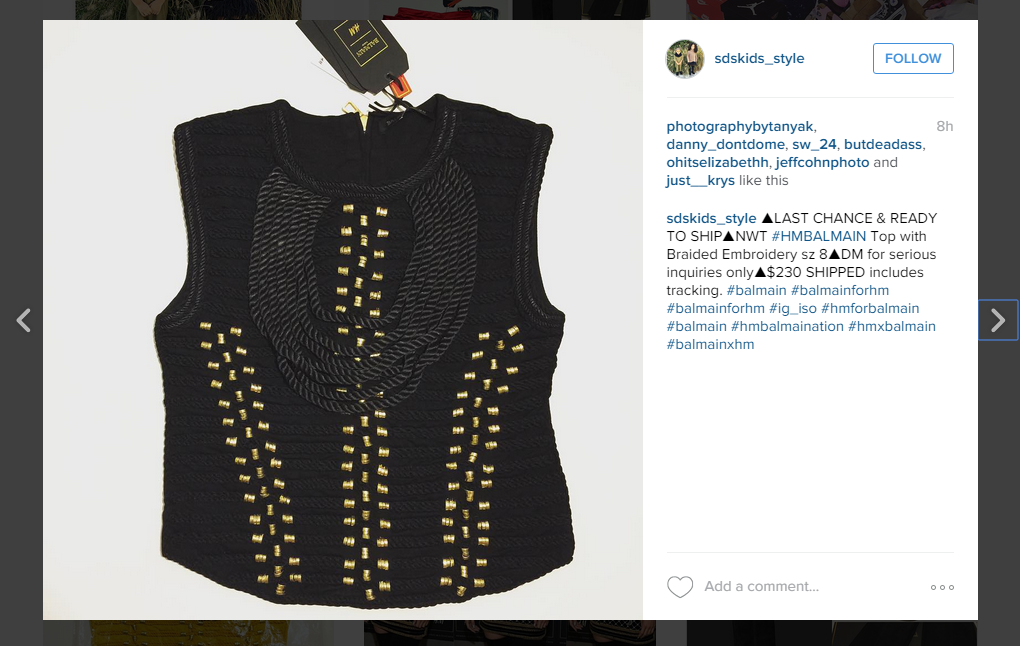 One user claiming to be an H&M store manager posted images of clothing from the Balmain collection, including a much-coveted beaded jacket and beaded dress worn by the Jenner sisters.

The user, posting under a (now deleted) account, left comments under the official Balmain x H&M Instagram feed, where hundreds of users complained about sold-out items.

Like other Instagram resellers, he claimed to have many of the most desirable pieces for sale, and invited buyers to message him directly.

Marketing approached several Instagram users who had expressed an interest in buying from resellers posting on the site. All said they had chosen not to buy anything via Instagram, largely because they thought resellers might scam them, or the clothing was too expensive.

Of bots and men

One company, Heated Sneaks, openly promoted its bot on Twitter a day ahead of the Balmain x H&M launch.

Its bot is a Chrome extension which, when enabled, can pick out particular items in a given colour and size, add them to the shopper’s basket, and check out automatically.

Online shoppers could pay $40 to buy the extension.

Marketing emailed Heated Sneaks to ask how many customers had signed up for the H&M bot, how many had succeeded in buying items and whether the company worried about bans on bots.

The site’s owner, who declined to give their name, replied: "My exact sales are private numbers but in comparison to other drops this drop brought us a lot of customers."

Asked about both bots and Instagram resellers, a spokesman for H&M said the retailer was unaware of either issue.

US street apparel company Supreme now blocks those it detects using bots. Nike has also been trying, off and on, to kill Nikebots for years by asking buyers to prove they’re human.

The company has tried using CAPTCHA and an online reservation system, though it’s nixed both for unknown reasons.

Reddit’s ‘streetwear’ forum is also full of sneaker fanatics trying to get hold of a pair of Yeezy Boost 350s, the trainers designed by Kanye West for Adidas.

As online retailers turn to limited edition collaborations and "drops" to grab the attention of fickle online shoppers, they might also need to be aware of digital savvy shoppers out to game the system.

The problem isn’t about to go away, according to Scott Ross, chief technology officer at DigitasLBi.

He told Marketing: "Bots aren’t that difficult to set up, but the larger problem people need to be aware of is that the percentage of the population that is considered ‘technical’ continues to rise.

"Kids have grown up digital, and technology is part of their DNA now. Everyone codes, and not realising that will be a problem for brands."

Ross argues that bots, which are relatively unsophisticated, are just the start of the issue.

He said: "These bots are just dumbed-down versions of the testing tools we use as engineers to ensure the quality and stability of our code platforms.

"There are far more nefarious ways you could use automation to game the system, so this is only the beginning of the problem for brands."

On the flip side, setting artificial limits on availability is an old game, and one that can enhance rather than damage a brand's reputation.

Ross said: "Having a product so highly sought after that it’s resold on eBay is usually a good thing for a brand. It’s free media.

He added: "Bots aren’t solely limited to resellers however — when technically minded consumers want something, they won’t be afraid to use technology to make sure they get it.

"Bots, price monitoring, showrooming, etc.  They are all examples of how modern consumers are arming themselves with tech to get what they want, for the prices they want it."