No industry is immune to disruptive new business models. As Santander announces a venture to invest in digital start-ups and online-only bank Atom secures a trading licence, we ask whether banking could be about to face a new wave of branchless challengers?

Banks have the unenviable position of being under attack from a two-pronged PR problem: not only are they suffering from deep consumer mistrust, but they are also seen as stuffy, slow-moving relics of the pre-digital era.

We’re tapping into the fact that consumer behaviour, when it comes to mobile, is dramatically changing

Heritage does not make an industry infallible, however. New brands and leaner business models are emerging that put the millennial consumer at their heart. The atmosphere of negative sentiment generated by scandal after scandal over recent years (the financial crisis, Libor, bankers' bonuses) has left the sector a clear target for a new type of competitor.

Cue Atom Bank, a digital-only bank that last week received a licence to trade. The entire positioning of the brand is anti-establishment. On its site it lays down its mission statement, to be "simple and transparent and innovative". On Twitter, it promises to build a bank "with none of the baggage of the past".

Chief marketing officer Lisa Wood says Atom is aimed at millennials and "digital explorers". "We want to change banking," she says. "We believe we’re a real alternative to the traditional high-street banks."

Harnessing the rise of mobile

Atom is tapping into consumer apathy toward established banking brands and wants to increase the proportion of consumers who switch bank – only 3% did so in the past year, according to the bank. 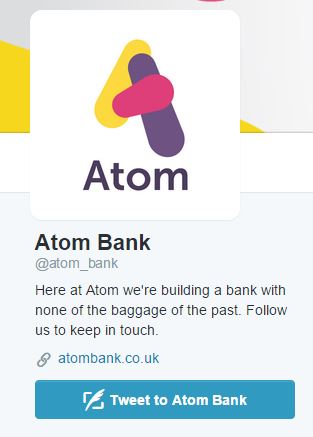 "It’s interesting that banking has a bad reputation, but when you ask people if they’re happy with their bank, or trust it, then in the main they feel OK about [it]," says Wood. "The market needs to significantly change so customers feel there’s a reason to switch banks. We believe that will only happen as more competition enters the market."

Atom is a brand designed around the rise of mobile banking, and being a start-up means it can move significantly quicker than bigger brands, and make bolder decisions. Mobile has overtaken branches and the internet as the most popular way to bank, Wood explains.

"We’re tapping into the fact that consumer behaviour, when it comes to mobile, is dramatically changing, and there’s an opportunity to offer a banking experience that has been designed specifically around these changes, rather than from an evolution of a branch-based bank extending into digital," she adds.

Of course, Atom is not the only bank experimenting with digital. Barclays, via bPay and its Digital Eagles programme, has been investing in a more seamless digital experience. All the major banks have embraced mobile via apps.

But there are also other start-ups that call themselves Fintechs. Yesterday, Spanish bank Santander announced that it would work with a mobile specialist, Monitise, in a 50:50 venture to invest in, build and scale digital finance start-ups. The move by Santander's Innoventures Fund, which was launched in 2014, is a sign that established brands are looking to incubate the next big thing.

The changing face of UK banking

In this context, whether Atom starts stealing customers from the traditional banks is irrelevant. What it represents is the changing structure of the market toward realigned, customer-centric brands.

"We’re not taking our inspiration from other banks," says Wood. "We’re building something that won’t look or feel like your standard banking app experience.

Our brand is values-based, and everything we’re doing is being designed based on bringing our values to life

"Our brand is values-based, and everything we’re doing is being designed based on bringing our values to life and making sure we’re in tune with our target audience," she adds. "We're thinking like customers first, not bankers."

So does Wood think banking is about to witness its 'Uber moment'? "It's certainly ripe for one," she says.

Educating customers to change their behaviour can take years, but what is clear is that traditional brands need to move even faster to shake off the shadows of the past and embrace the new.

Why the smart banking revolution has yet to happen

Watch: how financial technology is changing the way we pay

Connecting with Gen Z: Why Santander is reaching out to a youth audience

Get the 'earned vs paid' balance right to capture engagement

Is HSBC using legislation to cover a more questionable decision to rebrand?