Stereotyping in advertising and media is the result of fear and "risk-averse corporate individuals".

According to Tim Davie, the chief executive of BBC Studios and director of Global: "Corporate individuals are generally risk averse, they are a little bit scared in corporations that is the truth, so you don’t take risks."

"So, therefore, you say, 'I want to play safe' and that is how a stereotype emerges because it's seen as safe, least risk."

Speaking at the Diversity in Media and Advertising Summit, held at the BBC earlier this week, Davie said that what is exciting about the world at the moment is that taking risks is paying dividends.

Making reference to British Vogue, which has placed diversity at the heart of its creative output and brand, Davie said that there is a great deal of joy in risk-taking with teams working better and having a sense of energy about them when they are able to do so.

Davie added: "At the end of the day you have to look at yourself a bit and say am I willing to take a risk. The safe route is often not the route  that will take the company or brand forward."

What gets measured gets done 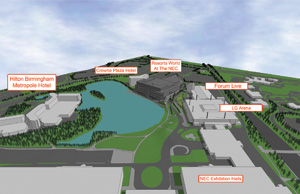 Davie said the responsibility of breaking stereotypes and better representing society are profound. He added:  "It’s phenomenally important that you are in tune and not left behind with where and what we are as society."

Tunde Ogungbesan, head of diversity, inclusion and succession at the BBC, said that the organisation acknowledges that to be able to reflect and represent the UK we need to change some of the things that we do. He explained: "The very first thing we did in 2016 is to put targets in place – but not just ‘ordinary’ targets – (which he described as the targets that most organisations which have adopted this strategy have attempted to do around gender) – but we have gone a bit further down the route with gender, ethnicity, sexual orientation, disability and social class."

Ogungbesan said that this approach was the very first thing the organisation did "because what get measured gets done".

The BBC has an inclusive approach to diversity, he explained: "We used the tagline ‘diversity includes everyone’ it also includes thought-processes, where you grew up, if you went to university, age, religion. We defined diversity in its true sense not just the things you can see."

The shift to substance

While the corporation has made the headlines for the gender pay gap amongst its on-screen talent, Davie said that transparency has been an incredible source for good. "It is an age where we are flushing out cover-ups and irrational power structures and I think that really healthy and it’s really good news."

He continued: "The press side; I worry less about. I would say most crisis points are not comms crises; they relate to the truth and they relate to what has happened."

Commenting on the marketing implications of this shift to transparency, he said the age where marketing could just putting "a bit of sizzle on something" is over. Instead brands and businesses need to answer fundamental questions about themselves: what are you? Are you any good?

He continued: "Many of the recent brand successes are not driven by old-fashioned advertising or marketing they are driven by just something being very good at is heart. So I think this is the age of substance actually."

The danger of closed-loop cultures

"I have seen this with brands - everyone pretends it is all ok – then it collapses for the brand and marketing team. You need to create a culture in which trust levels are extremely high that is the battle," he explained.

Davie added that it is vital not to make your own experience the only experience and urged instead an approach rooted in looking outside of yourself, listening hard and contributing more broadly, explaining: "You have to really profoundly say that an organisation is not best served by having lots of people like yourself across all dimensions. That is initially threatening for people, but once they get over the bridge it is fun. I wouldn’t want to be in a room sitting with myself, I wouldn’t get a word in!"