It is estimated that about 880 billion photographs will be taken in 2014 and about 100 hours of video will be uploaded to YouTube every minute. According to Flickr, the iPhone is now officially the world’s most popular camera.

How could Canon compete in a world where everyone has a camera in their pocket courtesy of their smartphone?

Let’s reframe photography and moving-image capture as something to be more considered, less throwaway.

Consumers should be encouraged to be more dis­cerning about what they photograph and have a sense of what the end result could be, rather than simply snap what’s right in front of them. This led us to our positioning. The world is full of fascinating stories and experiences. Canon invites you to look deeper.

We wanted to encourage people to explore, look around the corner, walk that extra few yards to find something even more interesting. "Come and see" became our endline.

Understanding the consumer journey shaped the way we decided to structure the campaign. We would create a hub of outstanding content. Film to stimulate and interest people. Then we would take them on a journey. Stunning pictures, tips on how to get the best results and, ultimately, how Canon equipment can make it easy. The last bit of the journey was to guide them to purchase.

We knew we needed an event to hang everything around, something amazing that was just around the corner. We would shoot everything on Canon equipment, of course.

Among a few dozen stories we uncovered was the Calcio Storico in Florence – an event that had been going since 1500 but not many people had heard of. It seemed perfect. It was literally just around the corner from the cathedral in Florence. A typical tourist spot of statues, museums and architecture.

Four teams representing the four quarters of Florence compete in this brutal competition for the grand prize of a cow. Originally played by rich aristocrats and popes, the modern-day version is played by boxers and cage-fighters.

We were fortunate with the timing as the match takes place every June. Here we were at the beginning of April.

Jonathan Glazer was one of the directors we had been talking to about the project and, the more we found out about the event, the more excited he became. We also started to realise what a huge and risky project we were taking on. It was a live event, which meant no rehearsals, no retakes and no control over the action. We also knew that the whole tournament would be cancelled in the event of bad weather (which it was the previous year).

As well as the main film, we also wanted to shoot some others around the ad that demonstrated photographic techniques and the latest cameras. We commissioned the world-renowned photojournalist Christopher Pillitz. They would be "how-to" films rather than "making-of" films. So five films to make at the same time. All around a live event. 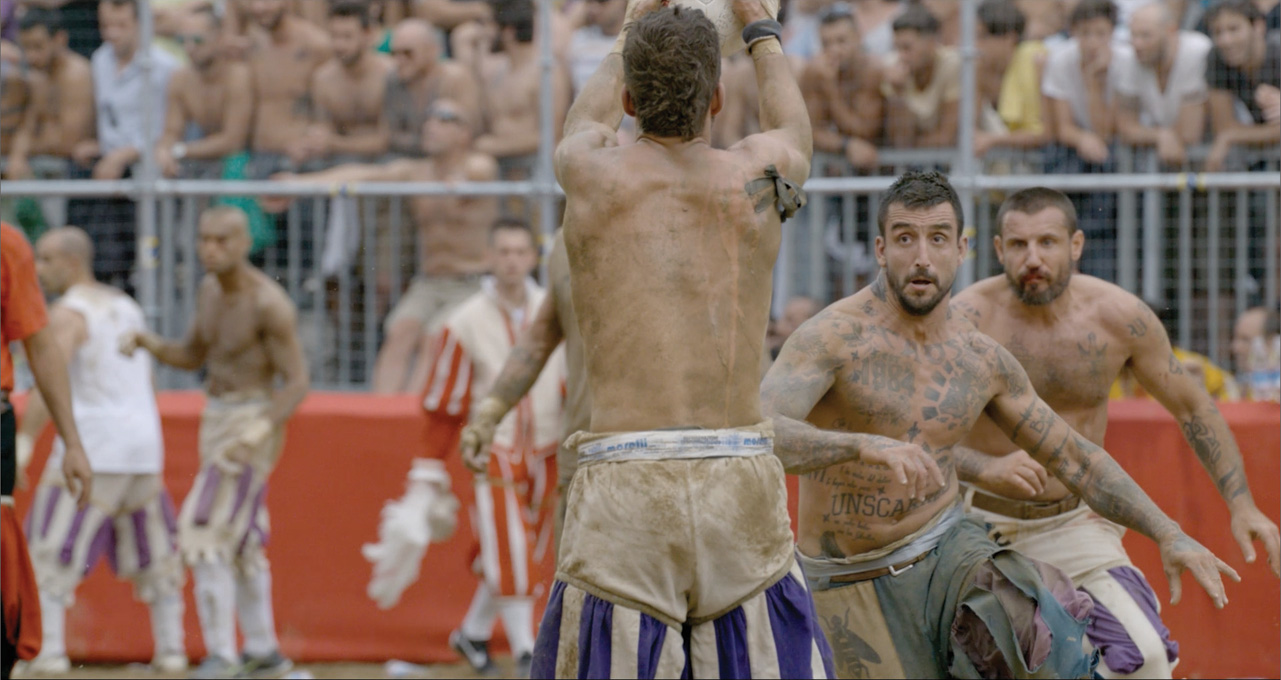 All of this made for a very interesting pre-production meeting. No script, no storyboards and a cast we couldn’t change. This was a real leap of faith on behalf of the client.

The weekend of the event came and Jonathan started to shoot the footage we needed for the beginning of the ad. The plan was that it would begin by showing some typical Florence imagery. The statues, the architecture etc. We then shot footage of the parade and stills of the gladiators arriving at the arena.

Ten cameras were set up in strategic positions around the makeshift pitch. One of the best positions was behind a thick wire fence. Our cameramen cut a hole in it seconds before kick-off to get a better view.

The match began and mayhem ensued. Two players were stretchered off in the first two minutes.

Punching, elbowing and kicking are all within the rules, but we hadn’t realised the team managers would also fight and the crowd would climb the fences, let off flares and throw things at the players. We captured everything. Fighting, laughing, crying.

We had 33 hours of footage from which to cut 90-, 60-, 30- and 20-second ads plus the four two-minute how-to films (pictured below). We had planned to use the natural sound of the event, but a music track emerged that captured the absurdity of the event as well as the drama, and we loved it. 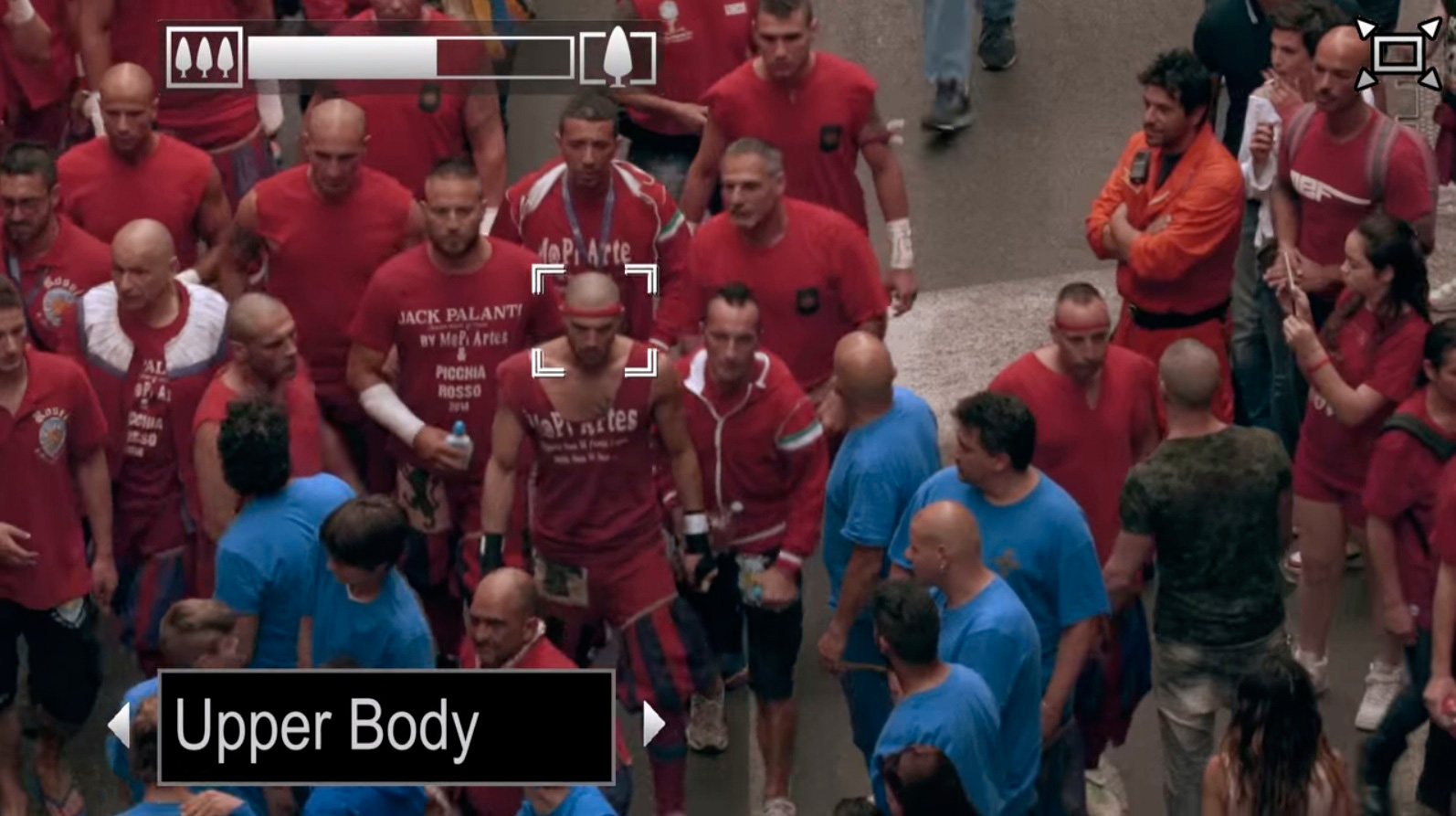 The client’s reaction to the first cut was a stunned WOW!, followed by general approval.

Some of the gladiators were invited to bring their tattoos and battle scars to the launch at Photokina, the photography trade fair, in Cologne.

We had done it, so bring on the next one. A far more sedate affair in Essex.

Russell Ramsey is the executive creative director at JWT London