From flamingos to musical seesaws, the Northern Lights and an underwater world, the second edition of Lumiere London aims to brighten up the capital - but how have the creators of the event adapted its award-winning formula?

In January 2016, a free outdoor light festival shone the spotlight on more than 20 buildings throughout central London.

The inaugural event, produced by Artichoke Trust and supported by the Mayor of London, featured a host of striking installations by international artists that lit up Piccadilly, Jermyn Street, Regent Street, Carnaby Street, Oxford Circus and Mayfair. An estimated 1.3 million people came out to experience the groundbreaking event, several prizes followed – including 2016’s Best Outdoor Event at the Event Awards – and the public eagerly awaited Lumiere’s return.

It’s been a two-year wait but the creators of Lumiere London have used the time to plan an audacious spectacle, designed to brighten up the dreariest time of the year. Artichoke Trust founder and director Helen Marriage explains: "Mid-January is the bleakest window of the year. Christmas is over, people are being stricter about food and they are waiting for payday, so we will be running a weekend of free entertainment designed to bring some light into everyone’s lives."

The hope is that the 1.3 million people who came to the debut event will return in 2018 and Marriage has reason to feel confident: "In such a short space of time, Lumiere has established itself in the event calendar. Last year we had so many enquiries about it – people expected a 2017 return and were waiting for it – it almost became an instant tradition."

And it is a bigger and bolder spectacle that returns, with a further 10 locations, artists and installations involved. The illumination of Westminster Abbey will be extended, while playful touches will include musical seesaws, the emergence of the Northern Lights across Mayfair and a flock of flamingos soaring above Chinatown. Other highlights include a Matisse-inspired animated illumination that will dance across the façade of the Royal Academy of Arts.

The capital's largest art festival will take place from 18 to 21 January and is set to be one of the most dramatic free events in the capital, not to mention one that spans London. Marriage explains: "There has been a really palpable appetite for different areas of London to get involved and we’ve widened it out – Croydon, Waltham Forest, Greenwich and others are getting involved, particularly with community events."

The event will stretch from north to south, running along the River Thames and encompassing the key areas of King’s Cross, Fitzrovia, the West End, Westminster, Victoria, the South Bank and Waterloo. The London Boroughs of Greenwich, Lambeth, Redbridge and Waltham Forest will be supporting a programme of community activities, including the Umbrella Project (pictured below) and the Bottle Festoon – shimmering chandeliers made from recycled plastic bottles. The Croydon Partnership will also take part with the Thornton Heath light festival. 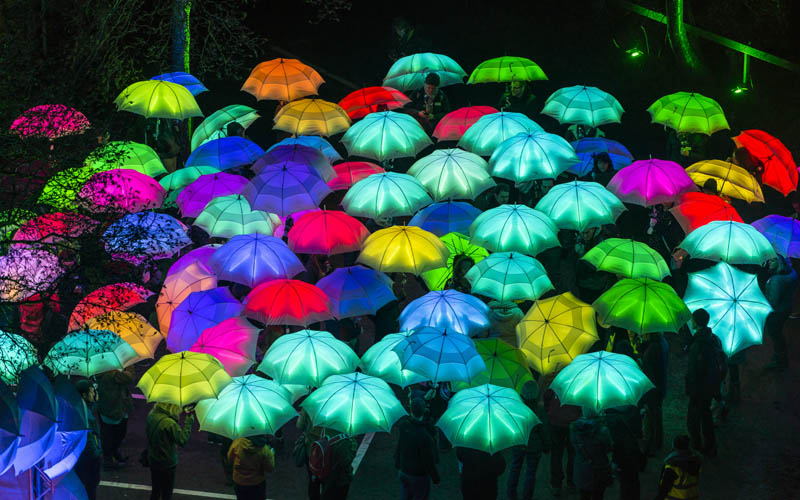 Recognising the success of the original event, a number of brands and partners have announced their support for Lumiere. "We are delighted to have Bloomberg on board as one of our principal supporters – it really recognised the power of the 2016 event. We are working with around 50 brands and partners for 2018. The whole event has been commissioned by the Mayor’s Office and we are working closely with London & Partners and TfL," Marriage adds.

The popularity of the original Lumiere led to overcrowding in some areas. For the next edition, the organisers have planned a series of changes to tackle the issue.

"We’ve tried to produce the programme in zones to avoid congestion and we are also suggesting that visitors pick one or two zones to explore each evening rather than attempting it all in one go," Marriage explains.

"We are also numbering the experience differently. To avoid congestion there is no suggested order in which to visit things whereas last time people started at the same point. This time we have several entry points to each zone, several suggestions and we will really be encouraging people to explore however they choose. There will be lots of different entry points on the Underground too. Finally, we’ve brought the event forward by an hour to start at 5.30pm, making it more accessible to families."

And given the anticipation of the event, has it already been scheduled for 2019? Artichoke couldn’t answer but the public appetite for city-wide experiences shows no sign of waning.

UPDATED: Who has the best agency Christmas card this year?

In pictures: Inside the UK's inaugural Magical Lantern Festival

Lumiere installations switched off due to overcrowding

Lumiere London to light up the capital's landmarks

Switched On festival lights up landmarks