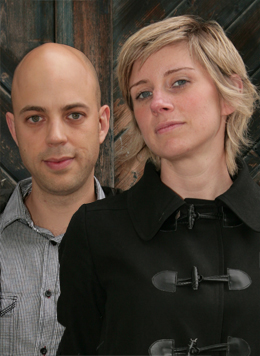 It’s beginning to look a lot like Christmas, even though it’s only November. But that seems to be the way these days. No sooner has the last day of summer passed than we’re being flogged mince pies and Santa-shaped fairy lights. So it’s no surprise that a sackful of ads from Campaign offers us up three Christmas TV spots to review.

So which will prompt us to raise a glass of bubbly, and which will induce a bout of serious heavy drinking?

B&Q obviously set out to make the perfect Christmas commercial. And it pretty much got exactly what it wanted. This spot’s packed with every Christmas cliché your heart could desire. Beautiful loving parents. Cute little girl. Tons of fake snow. Lovely homely house. Layer upon layer of chunky knit sweaters. And a crappy Blue Peter-style snowman model with poppy-out eyes. What’s not to like?

OK, so the house has so many lights that they’ll surely drain the last of the earth’s natural resources. And so many candles that the place is a certain death trap, but we’re still going to take our woolly hats off to the client for buying a 60-second spot to promote a three-for-two offer.

Meanwhile, Sainsbury’s has been extremely busy, presenting us with not one but three nicely observed slices of life. The idea seems to be not only to encourage us to buy from the supermarket for the big day itself, but to buy frantically from it for the entire season. The strategic thinking is as solid as Nanna Tollett’s Christmas pudding. But we can’t help feeling that the creative could have done with a touch of her special brandy flambé.

Are you allowed to make grumpy Christmas ads? According to Morrisons, yes, you bloomin’ well are. And to prove it, it has beautifully crafted a wry look at the darker side of Christmas. This supermarket clearly set out to offer something different to the traditional Christmas fare. And boy did it pay off, in a rather splendid, anti-Christmassy kind of way.

This spot feels like adland’s version of the curmudgeonly old uncle who turns up at the door uninvited on Christmas Eve, throws himself down on the sofa, puts his feet up on the dog and tucks into the drinks cabinet. While offering up nothing but a stream of witty bon mots in return.

The RAC spot looks like a Christmas ad, but you can’t buy what it’s selling, wrap it up and stick it under your tree. Well, OK, you could. But we don’t think anyone wants to open a gift to find an oily, orange-boiler-suited mechanic inside. And no-one really wants to see him tinkering away on-screen, either. So the clever chaps at Bartle Bogle Hegarty turned him into a cute kid and gave him a cute kid customer to help him on his way. Sweet.

Of course, no Christmas would be complete without a gag or two. Fortunately, this one’s a bit better than any you’ll find folded up inside a bog-standard cracker. It’s for Blinkbox and it actually made us laugh out loud. It’s a simple visual joke, neatly directed by John O’Hagan. A small spot that packs a pretty big punch. We’re still not entirely sure what Blinkbox does, but at least the ad made us smile.

Well, there you have it – we’ve reached the bottom of Campaign’s sack. There’s no satsuma but there is Gary Oldman. Which is all we can say about the O2 ad.

Strong ideas are rare birds; when one wings its way across adland, I’ll rush to the window and stick my head out to admire its plumage, probably wish I’d thought of that and then wonder how to make what I’m working on better. So, this week, I’m stoked that there’s one rare bird, a Christmas one at that – no mean feat!

Christmas ads are hard. Like any raft of work that appears at the same time, be it the Olympics or the World Cup, it’s hard to stand out from the crowd. The Olympic ads were lucky – at least they weren’t haunted by the ghost of last year’s John Lewis ad. They’ve got their own ghost now: Channel 4’s Paralympic ad – a total banger.

O2. Gary Oldman is no stranger to adland. I like the world this ad takes me into – I wanna see that black-and-white movie. It’s beautifully rendered and atmospheric – it’s a shame I had to leave it to become an O2 priority. Power of the movies, I guess.

B&Q. Classy film craft, beautifully lit – love the Don’t Look Now dwarf in a red cape reference. How did they get away with that?! Hats off. That John Lewis ghost is lurking in the shadows, but who cares? This ad has some beautifully observed moments and, anyway, he’s no match for a nimble dwarf in a red cape.

Sainsbury’s. Twenty seconds is a tough time length. I like how the Japanese do 15-second ads – hyper-speed haiku that scars the back of your eyes. These 20-second spots are little Christmassy moments convincingly rendered.

Blinkbox. For me, America excels at the laugh-out-loud ads. When they nail it, they nail it good and make me laugh. Sometimes I wish a few more British ads would have a go at that style and I think Blinkbox has had a right old pop. I reckon if I knew who Magic Mike was, I’d really love this ad.

Morrisons. Ba-da-boom! A rare bird fit for a boxing ring. This is brilliantly directed, acted and crafted but, most of all, it’s just a fantastic simple idea and that’s what makes it unbreakable. Absolutely everyone involved from its inception to completion deserves an advertising Oscar. A class act.

RAC. Charming, sweet and effective. Good snow sounds. When my car breaks down, I will await my RAC driver with good manners and sympathy for his parents, who must be wondering if he’ll be home for tea.

O2 "you and Oldman" by VCCP