Long hours aren't the problem – they are a symptom of an overstretched system that no longer gives creatives the right reward, support and freedom to do their jobs.

There has been a lot of online chat about the damaging culture of long hours lately. I spotted a post by D&AD boss, Tim Lindsay, that laid the blame squarely at the feet of clients not paying agencies enough. It made a lot of sense to me.

Tim’s post was a response to an original article by Kate Magee, who talked of stressed-out creatives buckling under the pressure and suffering from “burn out”. That’s sad.

Maybe I was lucky; I never felt burnt out. In fact, here I am, 45 years in the business, and I still get fluffed-up at the smell of an opportunity to be creative.

It got me to thinking about my agency days, when I sometimes went into the office at Christmas – just for the fun of it. Maybe it wasn’t just the longer hours and lack of funds that were to blame for the current situation… maybe it was the lack of creative opportunities?

As a youngster I’d always loved the festive season – Ye Olde Oak tinned ham, Eat Me dates, the mysterious appearance of bowls of fruit around the house (yes, fruit!) and, of course, the presents. 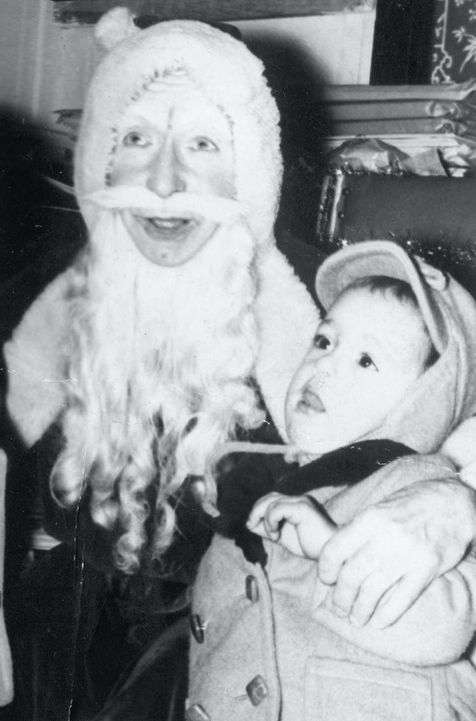 But the “Santa’s been!” moment had lost its sparkle a bit, ever since I’d left home and my mum had taken it upon herself to replace the contents of my stocking with prezzies that were… a little more practical.

The Spirographs and Space Hoppers of yesteryear had given way to gift-wrapped bog rolls, packs of Ajax and tins of Heinz Baked Beans.

Besides, things had got increasingly “lively” back at home now that all the Denton kids had grown up, so I wasn’t particularly looking forward to another festive round of watching my close relatives shout at each other.

That’s why, when my creative mate Chris (Palmer) suggested that we go into the agency and crack a couple of briefs on the 25 December, he was pushing against an open door.

Christmas Day 1988 turned out very nicely – we knocked out creative ideas left, right and centre ­– safe in the knowledge that there’d be no annoying phone calls or urgent meetings to break our stride.

In fact, we enjoyed it so much that it became a “thing”.

As a creative, I really couldn’t imagine a better gift than to work on a brief – for an appreciative client who wanted a stand-out solution.

Putting pen to paper and moving it around until something brilliant falls out of it is an absolute joy, I’m sure any good creative would agree.

But, of course, it doesn’t end there. A good idea has to be made, and made right. This means that during its production, it has to be defended… from any stakeholder that might try to stick a stake in it.

Because as much as coming up with a great idea is a joy, being thwarted out of making them is an absolute misery.

I learned that from my early days at a big, bad agency.

Nothing I did got sold, despite those being some of the finest ideas I’ve ever come up with (he said modestly).

I got increasingly depressed, until my kindly boss spotted there was something wrong, and sent me off to the company doctor.

I was referred for some psychiatric help, and I was prescribed some tablets that were so strong, one of the side-effects was I forgot how to put my trousers on the right-way round.

I promptly chucked the pills away and started going into the agency on Sundays. It was the best medicine I could have given myself.

The creative work that I did at the weekend led to my first-ever commercial in the D&AD annual.

It was my passport to joining the relatively new hot-shop, Bartle Bogle Hegarty.

I was like a kid who’d been given the keys to a sweetshop. Before long I was in the new office on a Saturday night with my equally new playmate Chris.

The ideas seemed to come easy: it’s funny how it doesn’t seem to feel like work when you’re enjoying yourself.

The hardest bit was getting an idea past the discerning eye of the boss – [Sir] John Hegarty. Once he’d signed it off it was generally a done-deal, it got made with minimal interference from anyone who didn’t want it to be great.

Then Lowes noticed our output, waved a bundle of cash and promises at us and we signed up.

The annual Heineken poster brief was open to anyone, but the Lowe Howard-Spink creative department was bristling with talent, so we went into the office on a Bank Holiday and drew up 70 poster concepts… We won the only two golds at the Campaign Poster Awards that year.

Maybe that’s what prompted a bloke we’d never heard of – Paul Simons (not the singer) – to phone us up and offer us a partnership in a brand-new agency.

Who would have thought? I mean, Chris had only been in the business for four years and I hadn’t been an art director for much longer.

Fortunately for us, one of our new partners, Carl Johnson, turned out to be the best salesman I’d ever seen in the business (and by the way, I’ve still never witnessed a better one). He didn’t need us in every meeting, he made sure we had plenty of time to concentrate on getting the work right.

And of course it helped that we had a roster of fantastic clients who not only trusted us, but would have been disappointed if we hadn’t blown their socks off with the work – after all, that’s why they’d hired us.

In the first five years I only took a week's worth of holiday, and that was to fly to LA at my own expense and shoot a pilot commercial (that turned into the biggest international award winner the agency had ever made).

It also just so happened to be a script I’d written a few years earlier one Sunday afternoon at that big, bad, old agency I referred to earlier.

I popped into Simons Palmer Denton Clemmow & Johnson most Saturday mornings, whether there was a pitch on or not. I wasn’t a martyr, I was being selfish. It truly wasn’t hard work, it was a creative’s dream.

I still miss my life in agencies.

That’s why it’s very sad to read about the creatives that are currently struggling with the long-hours culture, suffering from burn-out and leaving the industry in their droves.

I really don’t think it’s just the long hours that’s doing it, though.

It might be the increasingly long meetings, requiring creatives to spend their time talking about work, rather than using it to come up with great ideas. It might be the overstretched system that gets in the way of the necessary craft, essential to get the punters loving advertising again (instead of doing all they can to avoid it).

I feel sorry for the clients, too. I think they’re getting short-changed. Many of the creatives that are not burnt out are getting their creative highs by taking on personal passion-projects.

You see, the more freedom you give creatives to be creative, the more likely they are to give you their free time.

Not necessarily by going into the office out of hours… but through them thinking about the creative brief when they’re putting their socks on, on the bus, or when they’re brushing their teeth.

Any creative worth their salt can’t resist thinking about a solution to a creative conundrum – if all parties want something brilliant. But what’s the incentive if they know they’re going to get their wings clipped? They might as well be working on their vegan micro-brewery or their risographic ‘zine.

I know advertising doesn’t exist for the wellbeing of the creative department. Advertising is a serious business. But as I said earlier – give creatives a bit more reward, support, and freedom to do their job, and they’ll happily work round the clock… and the public will like advertising again.

Oh, while you’re at it, why not give them their offices back too? Now that would make a lovely early Christmas present.

Mark Denton is the founder of Coy! Communications

Paul Simons: a tribute to a friend with empathy and courage