After eight seasons, the series has reached an epic end, so Campaign has rounded up the best campaigns produced around the fantasy show. Warning: contains spoilers (naturally).

Last night (20 May), one of the most successful series in TV history, Game of Thrones, came to an end.

The fight for the throne saw Bran the Broken become king and Daenerys Targaryen take a knife to the chest in a twist of fate that drew mixed reactions – more than a million viewers have signed a petition to have the eighth season remade.

But whether you want to subject producers to a Cersei-style walk of shame or hail the queen in the north, it’s undeniable that some spectacular activity around the show has been produced.

Here, Campaign rounds up the best Game of Thrones ads, experiences and collaborations. 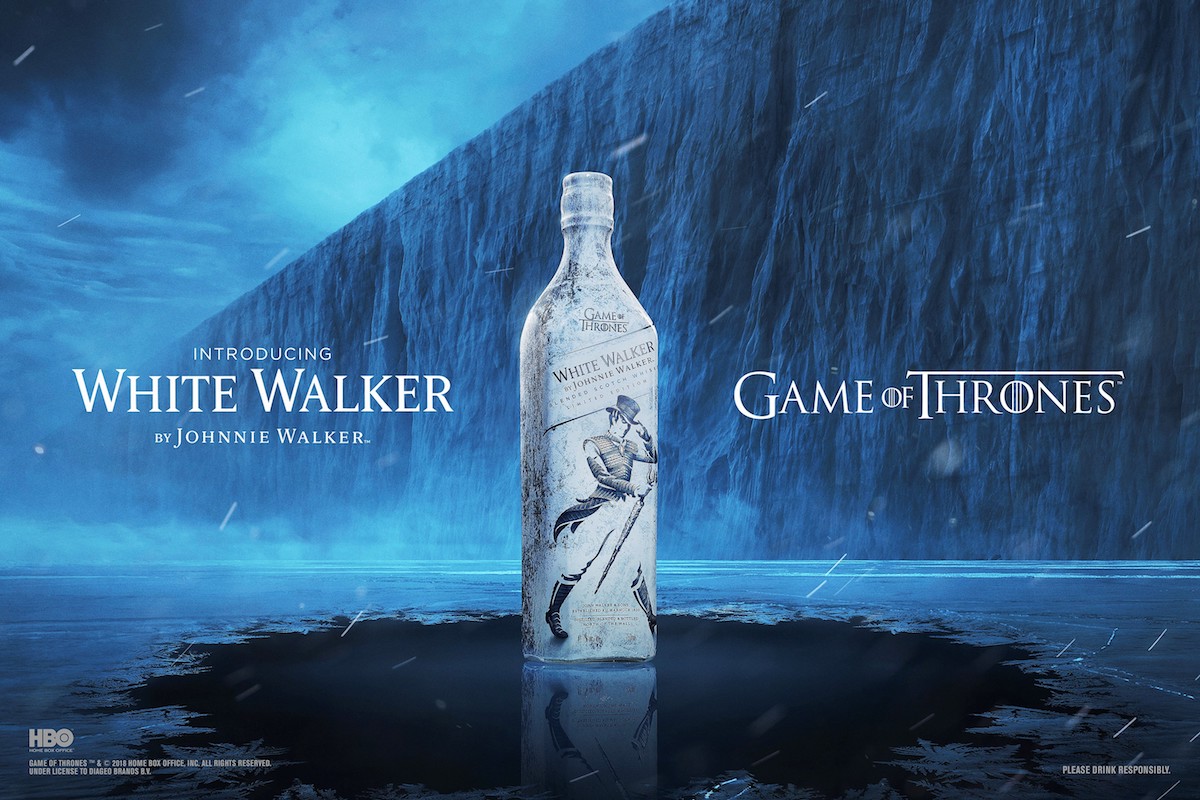 The bottling nods to the "frozen north", from where the White Walkers emerged, and was available from February.

To mark the launch, Johnnie Walker also created the "Frozen frost". The 2018 experience in east London gave fans the chance to walk through a "bone-chilling winter landscape" and take in the "crisp air" before trying the drink. The activation was delivered by PMK BNC.

Aldi got in on the action ahead of the show’s final season with a Game of Thrones twist to its long-running "Like brands" campaign.

As Aldi says: "Choosing your loyalties can be a dangerous game, but not when it comes to toilet roll."

All men must die – or, rather, dine 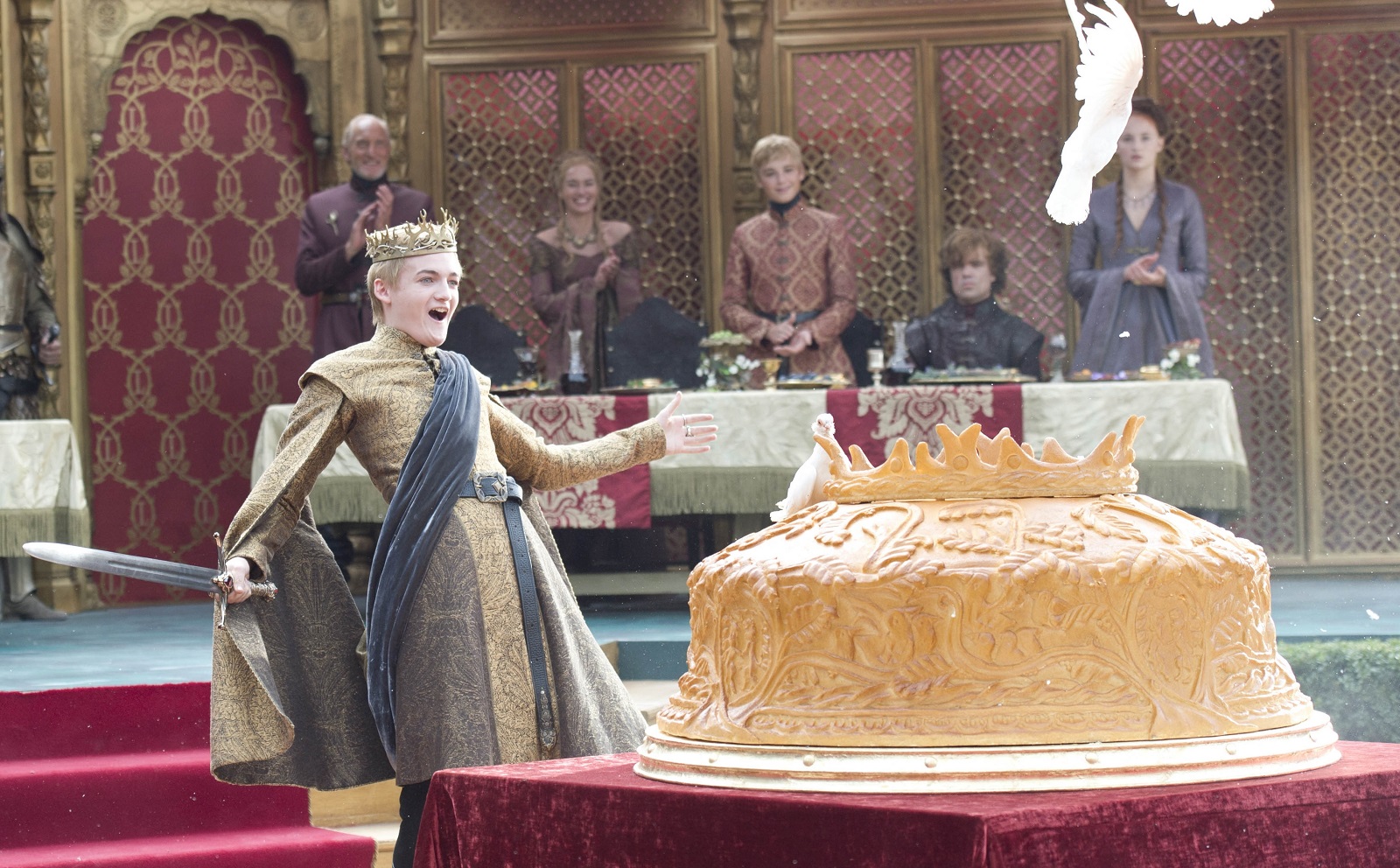 To mark the release of the fourth season on Blu-ray and DVD, HBO launched a pop-up restaurant.

Paraphrasing the High Valyrian saying, the "All men must dine" banquet was created to resemble a small council meeting in King’s Landing.

Unlike previous deadly dinner parties on the show, guests were treated to Westeros-inspired dishes, cocktails and entertainment.

The three-day experience took place at the Andaz hotel at London Liverpool Street in 2015. HBO enlisted pop-up specialists the Wandering Chef and Grosvenor Mixologists to create the event.

A Game of Thrones exhibition 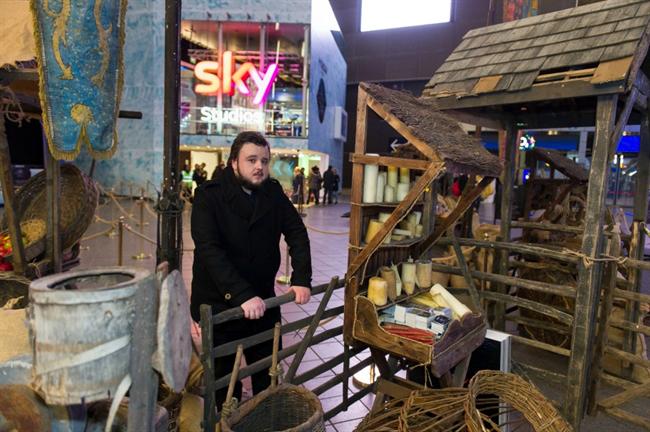 Sky Atlantic brought the fantasy series to The O2 for an epic exhibition.

Visitors could also enjoy various interactive experiences that utilised technology, from seeing what they would look like as a White Walker to virtually ascending "the wall" at the Oculus Rift station.

John Bradley (who plays Samwell Tarly) made a guest appearance at the 2015 event. Following its success in London, the experience headed to Tel Aviv, Amsterdam, Berlin, Madrid, Paris and Stockholm.

You know nothing, John Dough 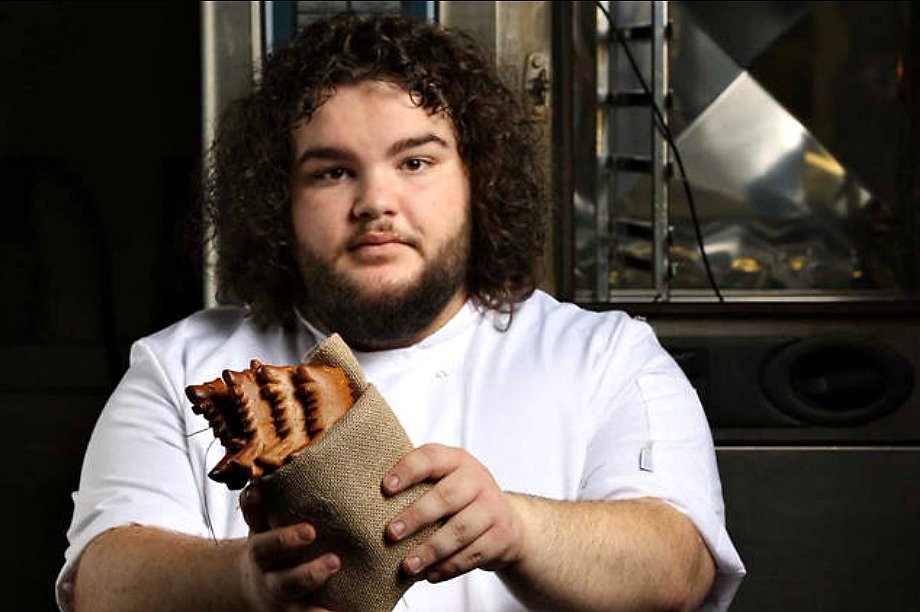 Inspired by the character Hot Pie, Deliveroo teamed up with the actor himself, Ben Hawkey, to open a bakery.

Fans could purchase direwolf-shaped loaves – like the one Hot Pie baked for Arya Stark – for £1 ahead of the show’s seventh season.

The produce was sold by You Know Nothing John Dough and debuted on the Deliveroo app for a limited time in 2017.

When it comes to holding back a crowd, there is only one man to do the job. KFC paid homage to Game of Thrones’ sixth season, when viewers finally find out the meaning behind Hodor’s name, by enlisting actor Kristian Nairn to hold back a hungry horde of customers.

Hodor is a KFC employee in "Lunchtime is coming" by Bartle Bogle Hegarty. He finds himself stuck repeating "Chicken with fries" over and over again, with the phrase morphing into "Chicken with rice", KFC's new healthier option. 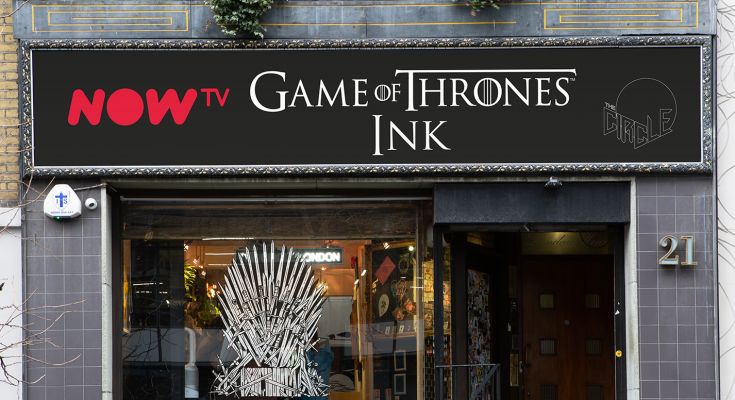 Dedicated fans could mark their love for the show on their bodies forever at Now TV’s tattoo studio.

Visitors could choose from a range of designs by Lauren Winzer, who created the "pack survives" tattoo on Sophie Turner, who plays Sansa Stark.

Winzer and a team of artists inked 100 free tattoos at Soho studio The Circle, which was given a Seven Kingdoms-style makeover.

Bleed for the throne

Ahead of the final season, HBO challenged Game of Thrones fans to prove their devotion by helping end blood shortages around the world.

The broadcaster's "Bleed for the throne" blood-donation activation, in partnership with the American Red Cross, featured six days of co-ordinated giving from fans across the US.

The partnership kicked off with an immersive experience at this year’s South by Southwest festival. Fans who donated blood received an exclusive "Bleed for the throne" T-shirt.

It was staged in partnership with Droga5 New York, with Giant Spoon devising the SXSW experience. 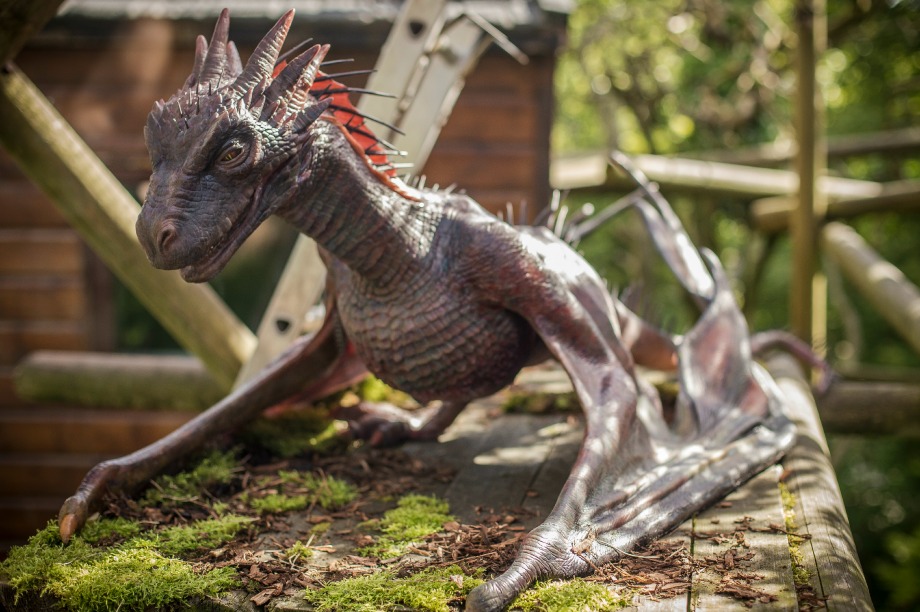 Tourism Ireland has produced a series of epic experiences as part of its long-standing partnership with the series and HBO.

In 2015, it brought an animatronic dragon to Belfast Zoo. The infant male dragon was operated by two controllers and had a 10-feet-wide wingspan. Visitors were able to watch the dragon’s feeding time, as well as a check-up with a vet. 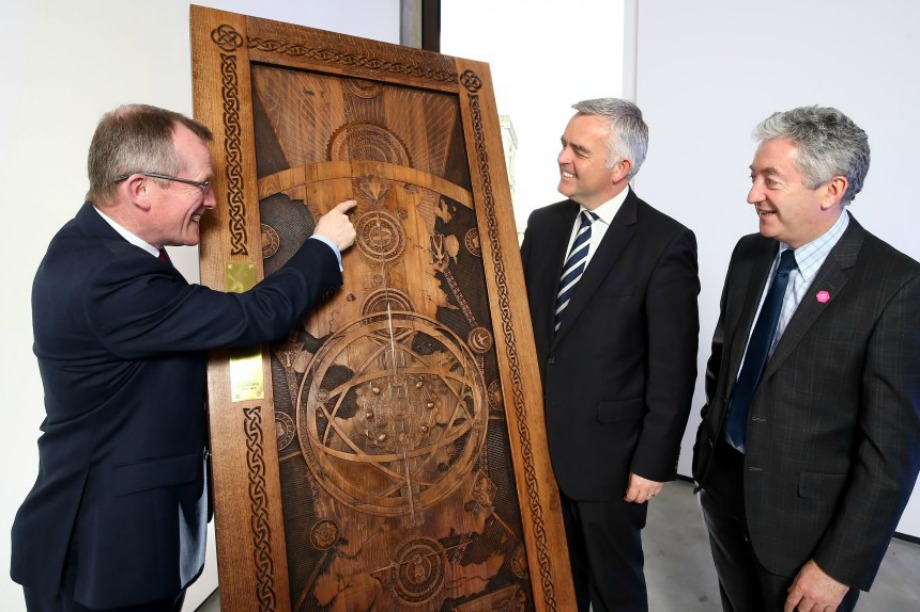 The following year, it hand-crafted custom doors depicting episodes from Game of Thrones’ sixth season. For the "Door of thrones" campaign, 10 carved wooden doors featured in venues near filming locations across Northern Ireland. 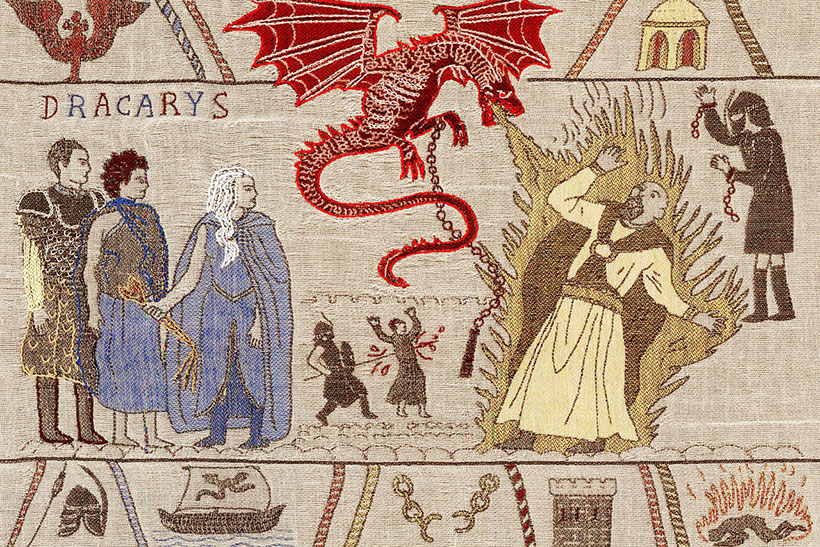 To promote Northern Ireland as a set location, the organisation created a 77-metre-long, Bayeux-style tapestry featuring key Game of Thrones scenes in 2017. Devised by Publicis London, the final tapestry was woven at Tomas Ferguson’s – one of the last surviving linen mills in the country. 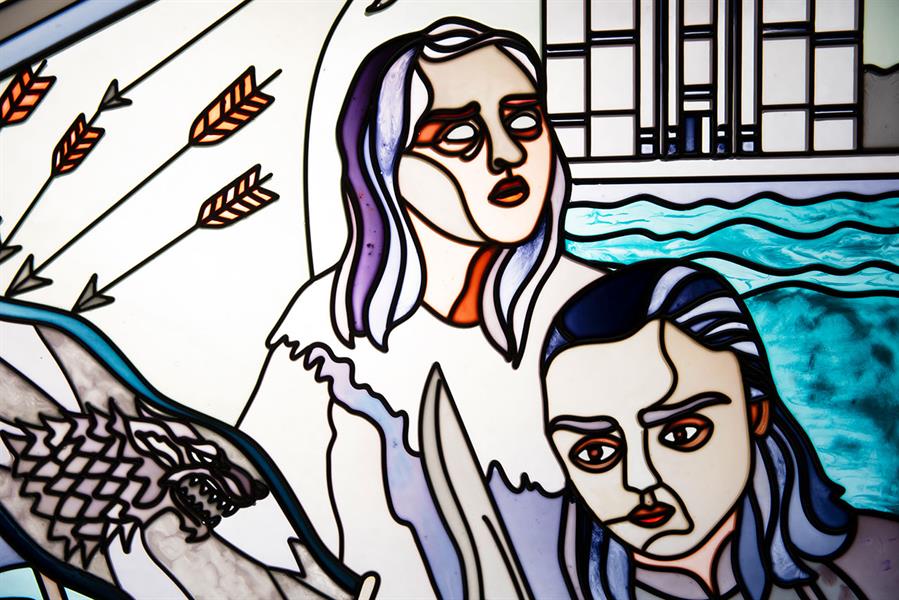 In its most recent campaign "Glass of thrones", stained glass window installations appeared in locations around Belfast, where much of the series was filmed, to promote the final season.

The windows formed a 1.8-mile fan trail and concluded at Titanic Studios, where much of the show was produced. The campaign was delivered by Publicis London.

In Numbers: Game of Thrones exhibition