Consumer sentiment seems to be aligning with government recommendations.

Last week, a House of Lords select committee report recommended that Premier League and Championship football clubs should not be allowed to have betting companies as shirt sponsors.

Consumer sentiment seems to align with the government – a study from Compare.bet found that 55% of the public think teams should not be allowed to have gambling logos on their shirts. Like many other fans, the only reason I haven’t bought a shirt for the past few years is the brash betting sponsor emblazoned across the midriff, despite my predisposition for a Saturday acca.

Football is at the point where it needs to find a way to move past betting sponsorship. The potential exists to create huge value for sponsors beyond just the shirt, with the possibility to feature less contentious brands. As M&C Saatchi Sport & Entertainment's Richard Barker highlighted to me, clubs have huge global media rights and whole squads of players with enormous reach.

Shirt-sponsorship deals are a big source of income for clubs, with the Premier League's highest earners Manchester United receiving £64m a year to have Chevrolet on their kit. While I’m sure a very low percentage of people in the UK, and specifically Manchester, are cutting about in a Chevy, it’s more palatable than a miscellaneous betting company.

These gambling sites typically pay less to lower-profile clubs, but their prevalence is more widespread, with 10 out of 20 Premier League teams sponsored by bookies and 17 out of 24 Championship teams following suit.

Everton have recently shown that a transition away from gambling brands can be managed, with the club's new shirt – bearing car-reseller Cazoo's name – becoming their biggest seller to date, following a move away from SportPesa. Luton Town, meanwhile, have turned down betting sponsors for their shirt and been lauded for it.

On the other hand, Wayne Rooney’s recent move to Derby (pictured, top) was bankrolled by 32Red – a move that Barker pointed out had the approval of the club's board and fanbase.

The necessity of income for lower-league teams means that the EFL is sitting on the fence, saying in a statement: "The association between football and the gambling sector is long-standing and the league firmly believes a collaborative, evidence-based approach to preventing gambling harms that is also sympathetic to the economic needs of sport will be of much greater benefit than the blunt instrument of blanket bans."

A ban on betting sponsorship would represent a big shift in regulations. Currently, tobacco products are the only specific item forbidden from being advertised on shirts.

Shirt sponsorship in football has always been debated, especially in the past 12 months. Paddy Power’s "Save our shirt" campaign reignited the issue last year, buying up the rights for clubs including Huddersfield Town, only to remove logos completely. 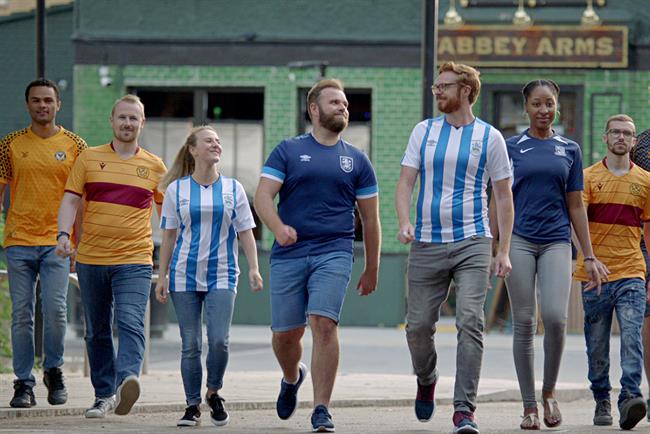 Sponsorship deals should exist to add value to the fan experience and Mark Lloyd, strategist at Dark Horses, believes that there has "never been a bigger disregard for this rule, extracting value rather than adding it, than in the uncontrolled proliferation of betting brands in football".

Many fans are full of nostalgia for retro shirts and, like me, some won’t remember a time before shirt sponsors. Some of the best kits in history wouldn’t look right without a brand logo. Newcastle United and Newcastle Brown Ale, Arsenal and JVC, Manchester United and Sharp – to name a few.

Lloyd thinks what makes a shirt lauded is more than pure aesthetics, with many factors contributing to its possible "classic" status. Pointing to a personal favourite – Coventry City's 1987 shirt – he says it's more to do with which players wore it and what the team achieved during its tenure, "not because we were all paid-up regulars at Granada Bingo".

Nostalgia aside (I personally don’t think shirts with betting logos are likely to ever fall into this "cool" category), the problem of gambling sponsorship is a predominantly moral one. The government’s report says that it normalises gambling, contributes to problems of addiction and exposes children to gambling.

Alongside technology companies, one of the biggest categories of shirt sponsors used to be beer brands, raising its own moral quesitons (although these definitely fit more naturally into the "cool" sponsor category). While there are no rules against alcohol companies being on shirts now, these brands seem to have naturally stepped back from the space and allowed betting companies to stake their claim. Lloyd thinks that as public opinion drifts further in favour of the ban, there may well be no alternative but for betting brands to accept defeat, in a similar way to beer brands.

The push to wind down sponsorship in football comes alongside cross-party MPs calling for a complete ban on advertising for betting and gambling brands. Steps have already been taken to reduce the harm of gambling advertising, including a number of major brands agreeing to a voluntary ban on TV ads during live sports.

Betting sponsors will not be relegated next season, but we might start to see them phased out. Everton's new deal with Cazoo, along with Aston Villa's new deal with the same brand, shows there is light at the end of the tunnel, while Bournemouth, Crystal Palace and Newcastle are out of contract with their betting sponsors this season.

So I might be buying a shirt, after all.

Ben Londesbrough is head of video production at Campaign

Should gambling ads be banned?

Do brands need to decide which consumers they want to keep?