Many of the big holding companies reported weak or falling organic revenues for the first half of 2019, with evidence that brands are cutting fees, taking services in-house and buying direct from tech platforms.

The future of the agency model, and how to boost flagging revenue growth, are top of the agenda for many of the big holding companies, including WPP and Dentsu Aegis Network which are set to hold gatherings of their senior global leadership in September.

Organic revenues at many of the big six holding companies were tepid in the first six months of 2019.

Vivendi’s Havas was little better than flat with 0.2% growth but Omnicom was stronger, up 2.7%, and Interpublic was, again, the top performer, up 4.6% in the first half of 2019.

Stock market analysts focus on the big four – WPP, Omnicom, Publicis Groupe and Interpublic – to calculate the global sector average, which shows organic growth among industry peers rose 0.8% between January and June. That compares with 1.6% growth in 2018 and lags far behind most ad industry forecasts for global media expenditure, which are running at about 4% per annum.

There is evidence that brands are cutting agency fees, taking marketing services in-house and buying direct from tech platforms.

Procter & Gamble said in its annual report in August that it saved $350m in ad expenditure by cutting wastage and reducing fees, and Vodafone, which is set to complete a global media agency review in September, reduced the scope of its account after taking biddable media in-house.

Mark Read, WPP’s chief executive, who has just marked a year in the job, and Tim Andree, executive chairman and global chief executive of Dentsu Aegis Network, who took sole control in January, are both trying to put their stamp on their respective companies.

Read is set to address his senior agency leaders about the progress of his "radical evolution" strategy to simplify WPP at a gathering in Brooklyn, New York.

WPP reported some easing of revenue decline in Q2 and notched up wins, including eBay’s media and an expanded brief from Centrica, but Read said he was "rightly cautious" and did not raise his annual forecast amid global macro-economic uncertainty.

The WPP share price climbed about 14% between January and August to nearly £10 but remains at half the level of where it stood in 2017.

"While this is still, obviously, a business in decline, we fundamentally do not believe that the agency model is broken," Ian Whittaker, analyst at Liberum Capital, said. "WPP has to re-adjust itself to the changes that have occurred and reduce its reliance on the traditional media business to drive profits."

Andree is meeting his lieutenants in London for a wide-ranging strategy meeting. He is reorganising the media-focused international network and boosting the role of creativity in preparation for closer integration with the Japanese domestic arm, as the global parent company adopts a "One Dentsu" strategy.

Dentsu Aegis Network’s revenue went into reverse at the start of this year and worsened in Q2, sliding 1.3%, which Andree blamed on its performance in China and Australia. 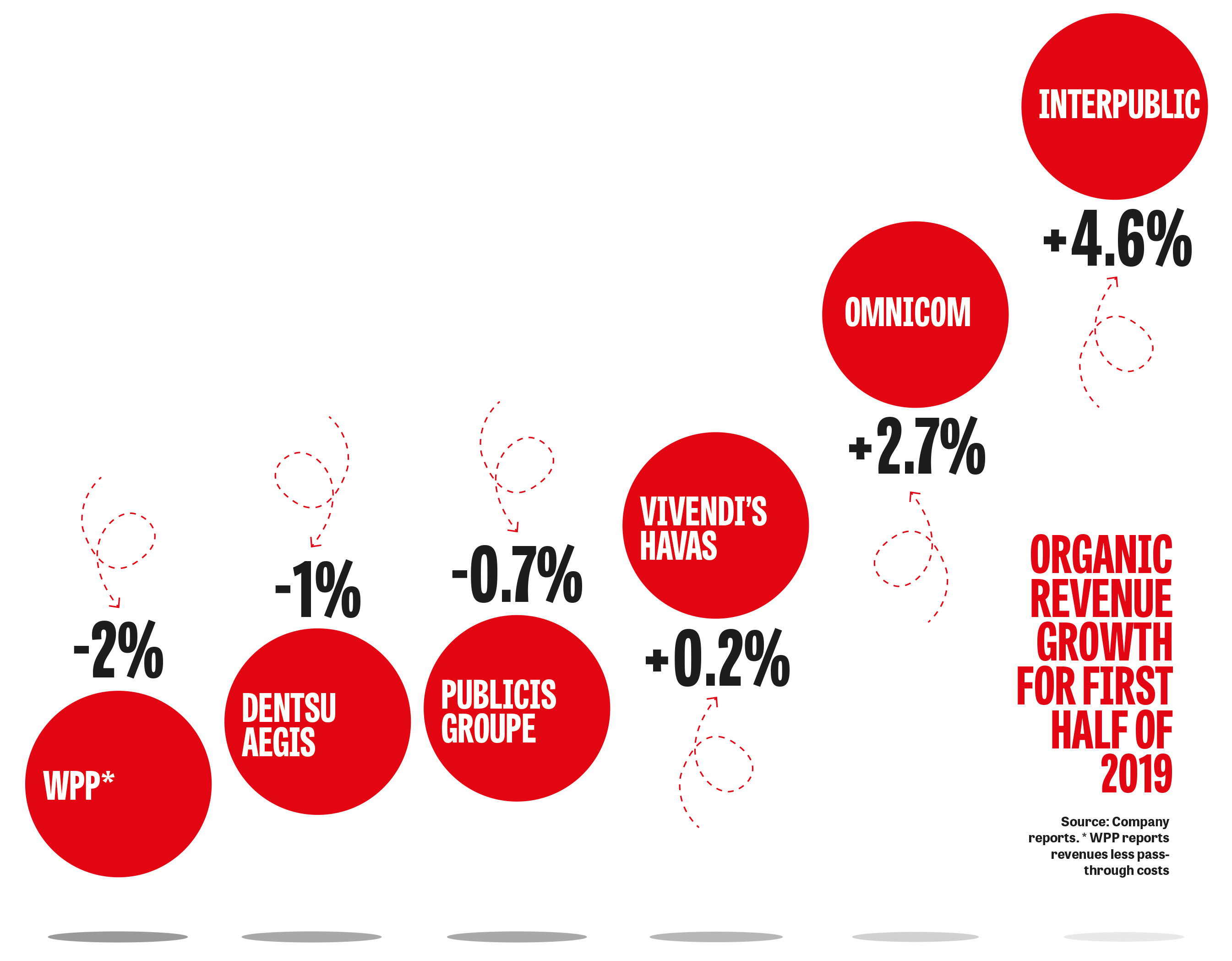 Michael Roth, global chairman and chief executive of Interpublic since 2005, and the oldest of the big six agency bosses, has one eye on succession planning, although sources maintain the 73-year-old is staying put, for now.

Philippe Krakowsky, chief strategy and talent officer and a frontrunner to replace Roth, has been promoted to global chief operating officer.

Krakowsky has kept another of his existing roles as chairman of IPG Mediabrands, the media-buying division, but will hand over the chief executive's role to Daryl Lee, previously the global chief executive of UM.

IPG’s growth slowed in Q2 to a still-market-leading 3% after some big US account losses, including Fiat Chrysler. The share price was $20 at the end of August – down about 3% on where it started the year.

Arthur Sadoun, global chief executive of Publicis Groupe, continues to face a slog to turn around its fortunes, although it crept back into growth in Q2 with a 0.1% rise.

"Our winning model connecting data, dynamic creativity and technology is, without a doubt, what all of our clients need," Sadoun wrote in a memo to staff in August, after winning global creative for Mondelez’s gum and biscuits brands and expanding its remit for media with Novartis globally and Louis Vuitton Moët Hennessy in EMEA.

However, investors remain to be convinced about Sadoun’s "Power of One" strategy, as he admitted continued cuts by a handful of large FMCG clients have been holding back recovery. Publicis Groupe’s share price dropped about 12% between January and the end of August. The stock sank to €41.50 last month – its lowest level since 2012.

Omnicom, which is facing reviews of Disney’s media and McDonald’s US creative, has been the steadiest of the holding companies, as it posted 2.8% growth in the second quarter – similar to Q1. The share price was up about 5% to $76 in the eight months to August, under the leadership of John Wren, global chairman and chief executive since 1997.

Analysts are watching Vivendi, which said in August that it is in talks to sell up to 20% of Universal Music Group to China’s Tencent. An initial 10% stake is in play and worth €3bn. There is speculation that Vivendi, where the Bolloré family wields voting power, could look at redeploying the proceeds.

Campaign has learnt that Vivendi’s Havas made an approach to Interpublic last year about an asset sale, although a source familiar with the discussion said it did not advance.

An Interpublic spokesman said: "We are always open to opportunities that could benefit our shareholders but we do not comment on speculation or rumours."

The French company has previously signalled an appetite for M&A. Arnaud de Puyfontaine, Vivendi’s chief executive, said in March "if there was an opportunity in the market to increase Havas’ position", he would look at that "with interest".

Publicis Groupe’s $4bn purchase of data business Epsilon was the big M&A deal of the first half, following Interpublic’s $2.3bn swoop for Acxiom last year but, otherwise, the holding groups have slashed activity as they focus on internal restructuring and simplification.

Dentsu was the most acquisitive, doing six deals in the first six months of 2019, but that compares with 17 in the same period a year ago, and WPP bought just one business and disposed of stakes in Kantar and Chime to reduce debt.

Beyond the holding companies, Accenture stood out as it made six acquisitions, and private equity firm Insight Venture Partners signed eight deals in marketing and ecommerce, according to data compiled by M&A advisory firm Results International.

The threat from consultants

Read played down the threat from Accenture, whose digital marketing arm, Accenture Interactive, made Droga5 its biggest acquisition in April.

He told investors at WPP’s half-year results that he had not seen "a material increase" in competition from management consultants in agency pitches this year.

He cited how WPP beat the consulting giant in a shoot-out for Vodafone Ziggo’s strategic marketing and transformation account in the Netherlands in May as evidence that "a creative-led, but technologically-driven approach can be successful with clients against Accenture".

In their presentations to investors, Read and Wren each made an impassioned defence of the role of agency groups to drive creativity that can improve clients’ businesses.

"What we do is critical to our clients," Read said. "The power of creativity, in our view, is never more important. Clients need growth, and growth comes from creative ideas, from innovation and inspiration – the types of things that WPP companies uniquely provide, in my view, more than consulting companies."

Wren said: "Omnicom was founded by creators. Creativity, which is in our DNA, is bred through deep culture that must be nurtured over time, in our case, since our formation. It is not something that can be acquired or sold."

He added there was "recognition for the first time in a long time" from clients that "differentiation" comes from "the quality of the creative people that you have".

Such confidence is not matched by the overall financial performance of the agency sector, so far, this year.

WPP, the worst performer of the agency groups, has set itself a target of growing at least "in line" with industry peers by 2021. With average growth of industry peers slowing to below 1% in the first six months of 2019, analysts pressed WPP’s leaders during a Q&A session whether they would be happy to be growing at such a lacklustre rate. "Would you be happy?" Andrew Scott, chief operating officer of WPP, shot back.

Arthur Sadoun: 'There will be no consolidation of agency brands'

Kantar's Eric Salama steps down after 17 years as CEO

Krow and Bigdog to merge in parent company restructure

£13.8 bn increased spending - how much for cyber and will it materialise?

The $100m question for agencies