It's taken more than three years to develop, but this month Baileys Chocolat Luxe will hit the shelves across Western Europe. Garbhan O'Bric, Baileys global brand director at Diageo, and Phil Rumbol, founding partner of the creative agency 101 and ex-InBev and Cadbury marketing director, chart the drink's creation.

"Since its inception in the early 1970s Baileys had enjoyed continuous double-digit growth year on year, making it one of the most successful spirits brands in the world. But the rate of sales growth had begun to slow down, before going into a steady decline. Consumer research told us that the brand had lost its relevance and appeal and it was being seen as tired and dilapidated. We knew we needed to find a way of transforming these negative perceptions and reignite the love that was once there for the brand.

"To achieve this, experience told us to go back to our roots and rediscover the cornerstones of the brand, to redefine brand relevance and appeal among today's consumers. We found two things above all else lay at the heart of Baileys historic success: first, the perception that it was the choice of modern, aspiring progressive women, achieved through the great marketing campaigns of old; second, we had brilliant, groundbreaking innovation at a product level. 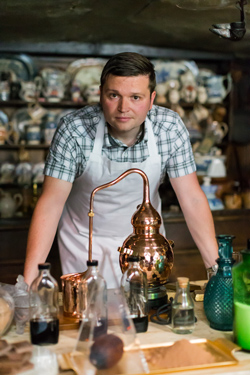 "With this research in our hands we stood back and took stock, facing the stark reality that there was a bleak absence of either quality innovation or marketing on the brand at present.

"Step forward Anthony Wilson, a scientist in the Diageo innovation department, whose determination and talent would change the future of Baileys.

"Anthony was as frustrated as we were by this decline in the brand. Inspired by his father (who had led the team behind the development of the original Baileys Irish Cream, launched in 1974), he strove to create a dramatic reinterpretation of the flavour variants common to our industry. He took a stand that demanded we return to the innovation-ideals that defined his father's liquid breakthrough, and ambitiously set out to create a world first - a drink that would bind real chocolate and alcohol.

"Over the next three years, Anthony and his team travelled the world in search of the best ingredients; his goal was to offer a multi-sensory experience of not just drinking chocolate, but imbibing it."

"Having rejected hundreds of different prototypes, Anthony cracked the winning formula. He had found a way to ensure real Belgian chocolate remained suspended in Baileys (a world first now patented by Diageo) and, in the process, created a truly amazing, rich and deliciously indulgent chocolate experience. One that wouldn't appeal just to lovers of Baileys, but chocolate-lovers everywhere.

"Suddenly it was all systems go within Baileys. Our marketing team felt a very real sense of personal accountability and need to step up to the plate as Anthony passed this incredible liquid into our hands.

"We wanted a launch that wouldn't just land our innovation, but would also "halo" back on the masterbrand. Great creative would have to go hand-in-hand with good thinking, and we would need a partner with an unrivalled understanding of the chocolate market, too - what to borrow, how to compete. We knew of Phil Rumbol and Laurence Green's reputation at 101. The agency founders had been the client/agency team responsible for the brilliant Cadbury campaigns that defined a new age of marketing and communications thinking, and we felt that they could be the perfect fit."

"At 101 we're passionate believers that creative thinking should be applied across an entire business, that organising ideas work harder than pure advertising ideas.

"So when Garbhan came and told us Diageo had created a world-first liquid, and he was looking for a genuinely deep and broad brand idea that had 'cultural pop', it was music to our ears.

"We needed to form a strategy that was true to the product and parent brand - and to Garbhan's ambition for 'organisational' marketing thinking - and present back to stakeholders in the Diageo business in August.

"We held a team kick-off meeting with a heady mix of ex-brand/innovation managers, creatives, planners and designers - led by our ex-marketing manager, Ross Farquhar. It was an easy project to get excited by and we charged ourselves with creating a brand that is not just luxurious and indulgent but also simple, famous and popular (as opposed to niche). At its core, we agreed, is 'chocolate reinvented' (rather, that is, than flavoured Baileys)."

"Our team worked with 101 to create five overarching concepts to workshop with our audience. A liquid began to turn into a brand."

"We hosted a consumer workshop with a group of women, and presented them with themed concept options. We were investigating 'me time', taste sensations and science. An idea that this is women's secret indulgence, to be shared with friends, started to form and be built on. It was apparent that there was a powerful emotional connection with the thought of combining chocolate and Baileys before they had even tried it, and this could be used to market the liquid ahead of the launch."

"For this project we broke with tradition at Diageo, and held back on commissioning our packaging design team, Lewis Moberly, until we were confident we'd arrived at the final overarching concept.

"101 drafted a detailed visual brief that brought the concept to life - the magic of the liquid, the feeling of a hidden secret, chocolate and a drink in one bottle. Within two weeks we had a final idea that was exactly what we were hoping for: an unapologetically premium bottle that could command its position on the shelf, and complement the recently redesigned Baileys bottle."

"With liquid, brand concept, name and packaging locked down, the serious business of going to market began in earnest. The Baileys team and agencies spent the month in a 'war room' to crystallise the launch plan across Western Europe.

"A workshop session for Diageo's Western European trade teams had been held in London at the end of 2012, where we asked them to feed back to us what would excite their onand off-trade customers in local markets. We wanted to know what POS they needed, how to launch in their markets and to gather feedback from their customers. With the help of agencies Warl and Love, we created an internal sell-in film, brand-world documentation and brand marketing assets tool kit: the commercial nuts and bolts of any launch."

"Through detailed market and data segmentation analysis, we worked out that we needed to reach and excite exactly 3.2m women across Western Europe with Chocolat Luxe. That's the aggregate of a cross-section of women: those who link to our aspirational values; are chocolate lovers; and see themselves as early adopters and have a love of being first to discover products and experiences.

"With these interest groups, a great product on our hands and the goals of fame and desire to feed, we realised that pre-launch would be as critical a comms period as the classic launch. Drawing from other industries, in particular the film industry, we charged ourselves with having an audience primed with excitement and expectations ahead of launch.

"This prelaunch work would feed into the work of 101's concept development and above-the-line creative, and would need to run across digital, traditional PR and below-the-line comms.

"We also hired digital agency R/GA to help seed and nourish a pre-launch for the first time in Diageo's history. In so doing, we allocated a third of our marketing budget to this key phase."

"We hosted a pre-launch planning session at the Whitechapel Art Gallery. Looking across our audience for different angles, it was obvious there was a consumer demand for seeding and not just a corporate desire to do so.

"We left the session with a framework for the pre-launch in place, which R/GA and Unity PR would run with, while we turned our focus to the above-the-line comms that would follow."

"If Anthony had to trawl the world in search of the best chocolate for Chocolat Luxe, we were going to meet whomever we needed to to help us create the most innovative marketing strategy possible.

"With a need to understand how to make things pop in culture and leverage the power of digital media, we made a beeline to the Mountain View offices of Google to learn all we could.

"Along with R/GA and 101, we flew out for a five-day, intensive creative academy workshop. The possibilities for a launch like this are myriad, but one obvious area that stood out was the importance of creating high-quality rich creative content and, through great SEO, exciting, priming and rewarding viewers before the TV advertising had even aired. This will play an important part in the fame we are looking to achieve.

"'The Seven Ripples of Groundswell' is the plan that we brought back with us. A plan built on co-creation initiatives with artists, bloggers and opinion-formers; unique content properties to enable media partnerships; and a vast online-enabled sampling platform."

"We were on location shooting our print campaign with photographer Dan Tobin Smith. We wanted images that would subvert the codes of chocolate, so that the brand is first encountered in 'chocolate clothes'. Our print concepts were unashamedly productand packaging-focused; Dan executed them brilliantly, walking the line between mystery and clarity perfectly."

We filled a giant, glass swimming pool with Chocolat Luxe.

"With visual sensuality key to the success of our TV campaign, we needed a director who could capture the magic of the chocolate and Baileys coming together, binding to one another and 'marbling' in the glass. Johnny Hardstaff of RSA stands out as our director, not least because he marries a technical appetite with great storytelling.

"We filled a giant, glass swimming pool with Chocolat Luxe.

"The TV campaign will run in the UK in October and then be released in line with the product launches across Western Europe during October, November and early 2014."

"Our agency teams at Unity PR, R/GA and Carat worked with bloggers, content-creators, social networks and the media for a couple of weeks ahead of this pre-launch, exclusively in Harvey Nichols across the UK, both in-store and online. No other store reflects the luxury and exclusivity of our product better.

"Over the next two months 'The Seven Ripples of Groundswell' come into play, before we go live on 1 October in the UK and Ireland and the TV and print campaign begins.

"Chocolat Luxe sold out in Harvey Nichols within four days of being on the shelf."

Absolut: the influences and ideas behind design innovation

How to... increase design's impact on marketing

A good designer will lead you to the prize