LinkedIn denies intentional removal of posts and attributes the issue to a “bug.”

Black creative advertising executives are speaking out against LinkedIn after several shared experiences of having their posts centered on diversity and anti-racism removed from the platform without warning.

Conversations about LinkedIn censoring and demoting such posts surfaced two weeks ago when VMLY&R executive creative director of experience design, Walter Geer, shared his experience with a post about “uplifting Black voices” being removed from the platform. Geer was able to re-create the post several days after he complained about the issue to LinkedIn Help.

At the time, LinkedIn Help replied that the post, which contained a video and expressed discontent with having to “beg” for DE&I numbers from advertising agencies, was removed due to a bug with uploading videos to the platform. LinkedIn Help also noted that it does not censor posts and only acts in response to community guideline violations. 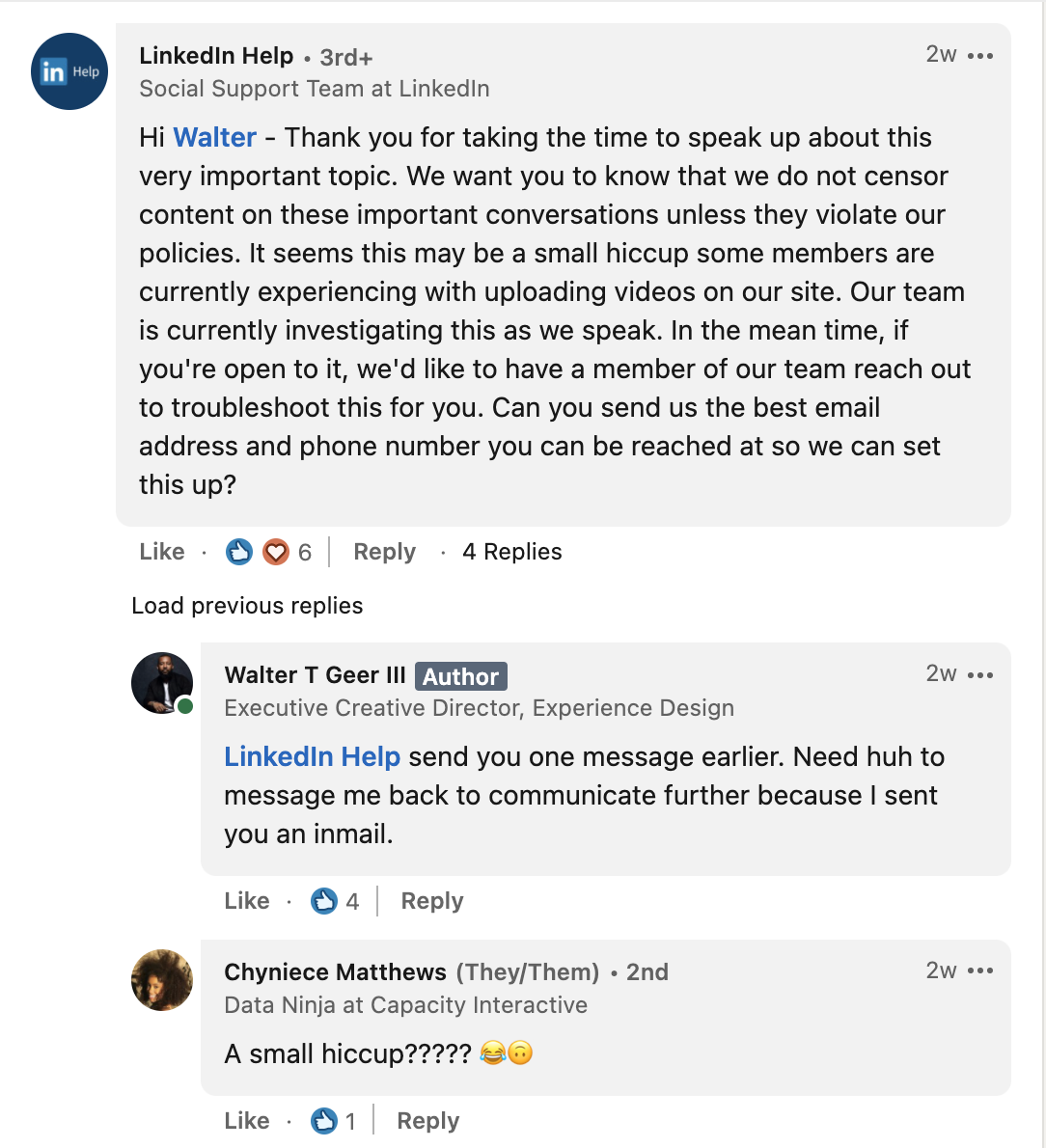 In an interview with Campaign US, Paul Rockwell, head of trust and safety at LinkedIn, reiterated that LinkedIn “would never censor important conversations regarding equity on LinkedIn and removes content only when it violates [its] professional community policies.”

But soon after Geer was able to repost his message, it began to pick up steam, warranting dozens of comments from other ad industry professionals of color that express​​ed similar challenges with the platform.

These included comments from Bryan Gaffin, EVP and executive creative director at FCB Health and Lisa Rose, director of experience strategy and insights at VMLY&R. 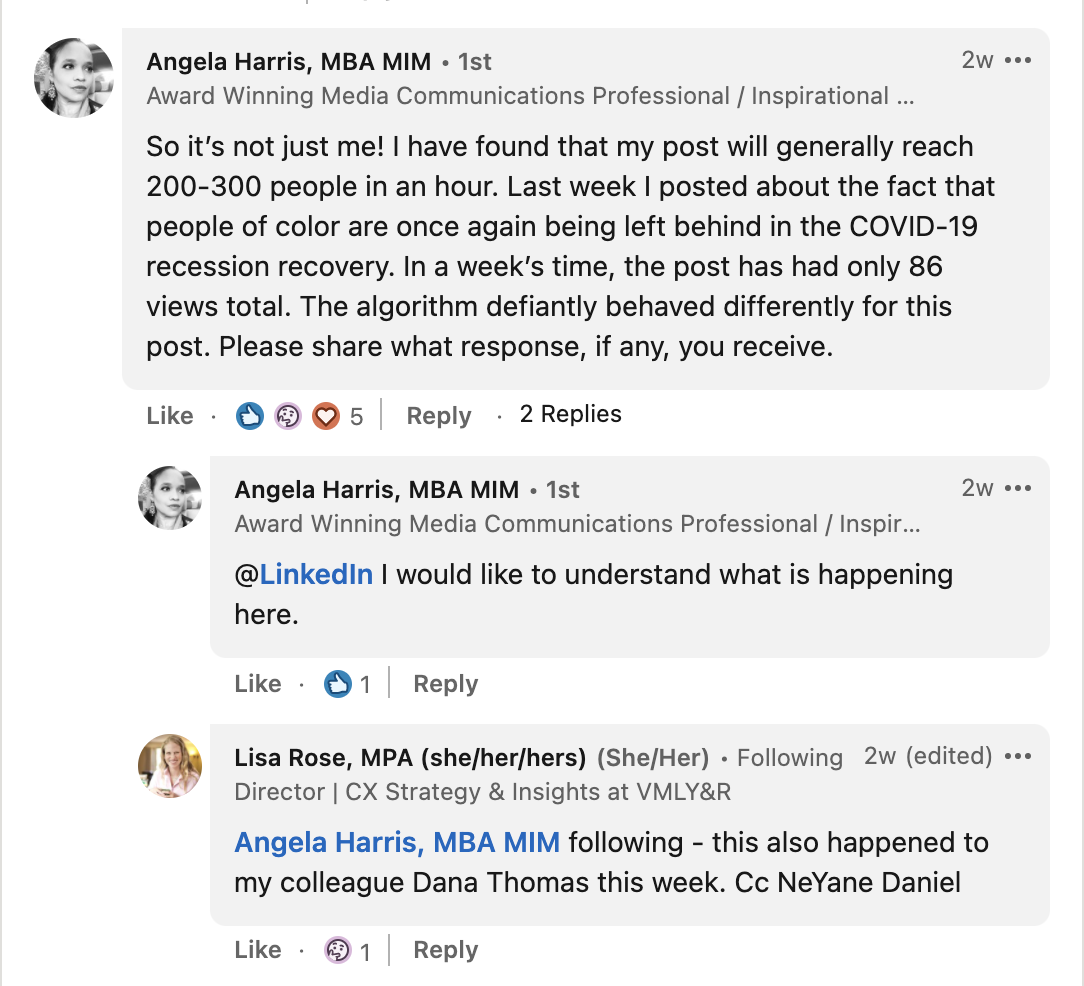 On July 16, a  LinkedIn Help representative contacted Geer over email to say that his post was actually removed not because of a bug, but because it had actually been flagged for review without further explanation as to why. Geer posted again on LinkedIn requesting to speak directly to LinkedIn CEO Ryan Roslansky about the issue, noting that “it is only fair that [Black people] get more transparency to these issues.”

LinkedIn shared this statement with Campaign US regarding the matter: "We fully support connecting members directly with our LinkedIn team, and have been in conversations with the member regarding the issue he experienced while uploading content. In this case, there was a technical error that temporarily prevented his and most of our members’ ability to publish video content. Once we realized that, we fixed it and let the member know, apologizing for the inconvenience. We want to be clear that we do not remove content so long as it follows our community policies." 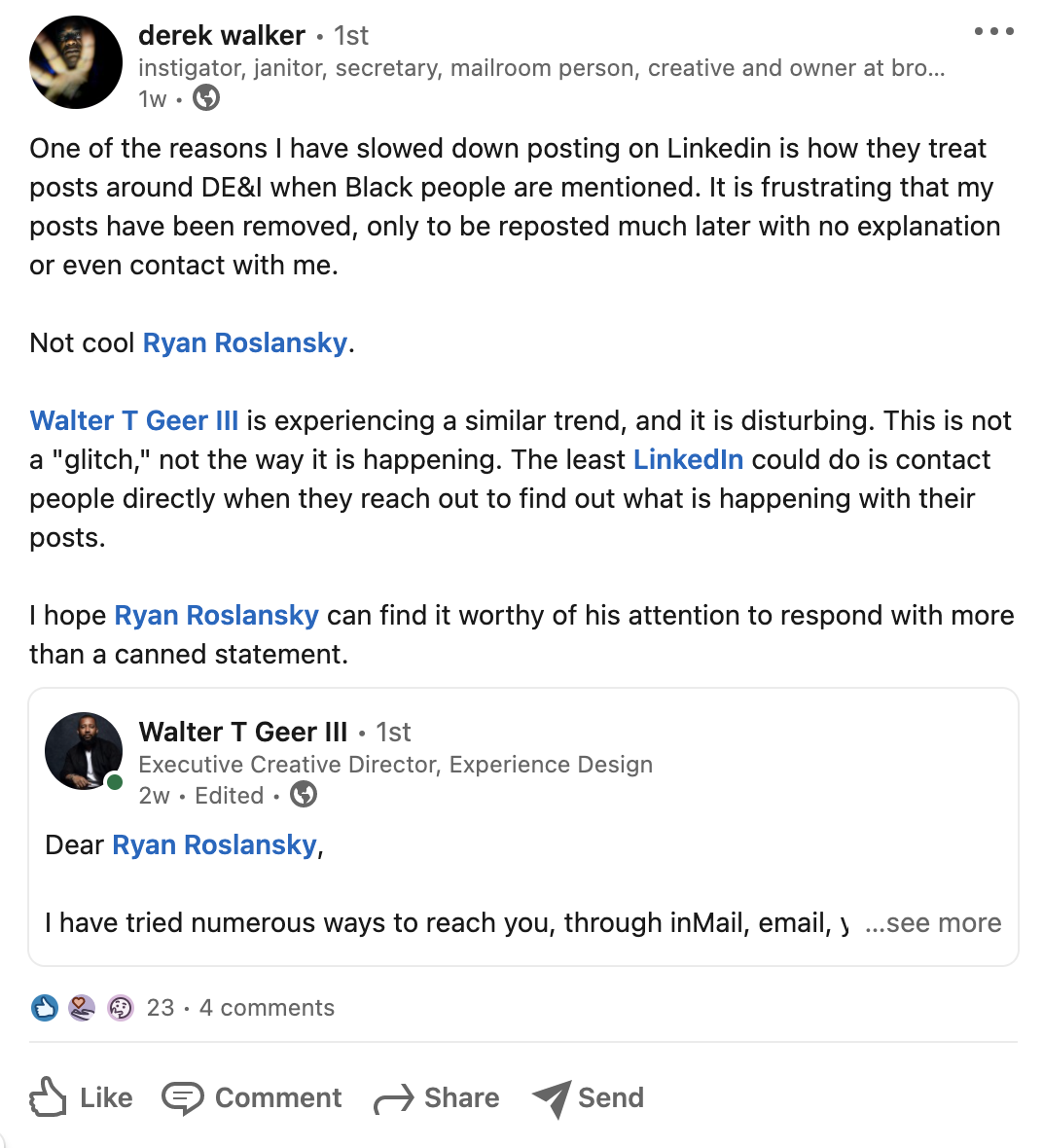 These individuals say they experienced similar difficulties to Geer in posting content related to diversity, inclusion, racism and other issues regarding the Black community, on numerous occasions and received little communication from LinkedIn as to why.

Walker, who has made several posts on LinkedIn about diverse hiring practices at advertising agencies, inequities in the advertising industry and racism in agency culture, told Campaign US he has stopped posting as frequently on the platform because his posts continue to be removed.

“I used to be on LinkedIn a lot more,” he said. “I got off because when George Floyd [was killed] and Black Lives Matter started, I was posting DE&I stuff and it was disappearing.”

While he said he made several attempts to reach LinkedIn about the issue, he would not hear back for weeks at a time. While some of his posts were eventually reinstated, enough time had passed that they were already “buried” and got little engagement,if any at all, he says.

Peter Ukhurebor, diversity recruitment consultant and strategist at GTB and co-founder of OneBlockVillage, said that several of his posts calling out racism in the advertising industry were removed from LinkedIn without explanation as well.

“When I spoke specifically about certain issues, especially in the advertising industry, the posts didn’t get enough engagement or were blatantly taken down without any reason whatsoever,” he said.

When he contacted LinkedIn, he was told if he continued to post about sensitive topics, his account would be blocked, he says.

Similarly, in an interview with Campaign US, Harris said some of her posts about diversity in marketing were removed with little notice, outreach or an explanation from LinkedIn. According to screenshots obtained by Campaign US, it was not until Harris commented publicly about her discontent with the platform and her canceled LinkedIn Premium subscription that she was contacted by LinkedIn Help.

Even then, private messages between the LinkedIn support team and Harris show that LinkedIn sought to address an earlier inquiry from February about an issue with a post on Harris’ business page, and did not respond to her questions about the removal of posts regarding race or discriminatory action against Black users.

FCB Health’s Gaffin, who noticed when Geer’s initial post was removed, has seen this issue play out on numerous occasions.

“There were a few times where I saw Walt [Geer]'s LinkedIn posts, and tried to comment or like them, but the posts instantly disappeared,” he said. “It didn't always happen, but the posts [that disappeared] were always DE&I focused. I told Walt and he tried reposting one of them, but then kept getting an error that the content couldn't be posted. It was very strange.”

Meanwhile in London, Shereen Daniels, managing director at consultancy HR Rewired, which specializes in combating racial inequities in the workplace, said she used to get tons of engagement on anti-racism posts on LinkedIn from her more than 47,000 followers. But recently, she has noticed a downward trend that led her to believe she has been “shadowbanned.” She raised the issue to LinkedIn and said the support team simply sent her a link to the platform’s community policy.

“Every time we raise these issues, we are just quoted the community policy without addressing the fact that they aren't applying those same policies to white people,” she said. “There are some terrible racist trolls on LinkedIn.”

These allegations are not the first LinkedIn has received about bias against Black users.

In 2020, at the height of the Black Lives Matter protests, the New York Times reported that several Black users complained to LinkedIn that their posts regarding racism were being removed. Black users expressed feeling silenced, especially when they used forceful tones or language.

Around that same time, The Verge reported that at a virtual town hall LinkedIn held for its employees to discuss George Floyd’s murder and the resurgence of the BLM movement, several employees used the forum’s anonymous chat feature to defend racist sentiments and question the efficacy of the protests.

Black users that have encountered issues on the platform are particularly frustrated by the lack of communication and transparency from LinkedIn — an issue Geer hoped to remedy by speaking publicly with Roslansky.

“I think this provides Ryan an incredible opportunity and platform to be absolutely transparent,” he said. “This is a conversation that could help a lot of people of color, specifically Black and Brown people, be like ‘wow, that's amazing. I feel confident that a platform like this has my best interest in mind.’”

Geer eventually spoke with Klayton Kopecky, LinkedIn’s director of global trust engagement, where he again asked to speak to Roslansky. On July 28, Kopecky followed up with Geer in a private LinkedIn message in which he stated “scheduling is a challenge” and a conversation with Roslansky would not be possible, according to a screenshot obtained by Campaign US.

Rockwell declined to comment to Campaign US about whether Roslansky would be willing to speak with Geer in the future. He reiterated that the issue with Geer’s post specifically was the result of a video-related glitch.

In May, LinkedIn published an updated statement on its Actions towards Equity in which it addressed its efforts improve inequities in its engineering through Responsible AI, a code by which LinkedIn designs its platform, rooted in six values: products include fairness, reliability and safety, privacy and security, inclusiveness, transparency, and accountability.

Roslansky was also not available for comment for this story.

Why it's time to flip the narrative in conversations about race

History On Repeat: the London filmmaker fighting for justice and for black lives