The demand for drones to be integrated into brand experiences is on the increase. Adam Doherty, managing director and executive producer at immersive experience studio Marshmallow Laser Feast, explains their true potential.

Those in the know forecast 2015 would herald the arrival of drones on the event scene and the prediction has come to fruition. In the space of just a few months, we’ve been asked to create several quadrotor shows, from car launches to experiential campaigns for big brands.

This is great news for anyone interested in how new tech can lead to new levels of experiential creativity and engagement. But most people underestimate the creative and engagement power of drones, seeing them as mere 'floating pixels’; whereas they are, in fact, a new mechanism for creating powerful live 360 experiences.

The show quadrotors available today are so much more than flying circuit boards with lights. Their performance can be choreographed with millimetre precision. This level of accuracy can create a near infinite display of synchronised maneuvers.

Most interestingly, we can use this precise positional data to build extraordinary volumetric light forms. With projects like the Cannes New Directors Showcase, the audience becomes physically absorbed; not only by the lights, but remarkably by their direct heat too as the light shines out and over the auditorium. It’s quite an extraordinarily tactile and immersive sensation for such a ‘robotic’ show.

If consumers’ hunger for 360 VR experiences is anything to go by, we can be confident they will respond equally favourably to the immersive potential of quadrotor shows. But, as with any such nascent tech, we all face many challenges in ensuring these performances are robust and tourable. 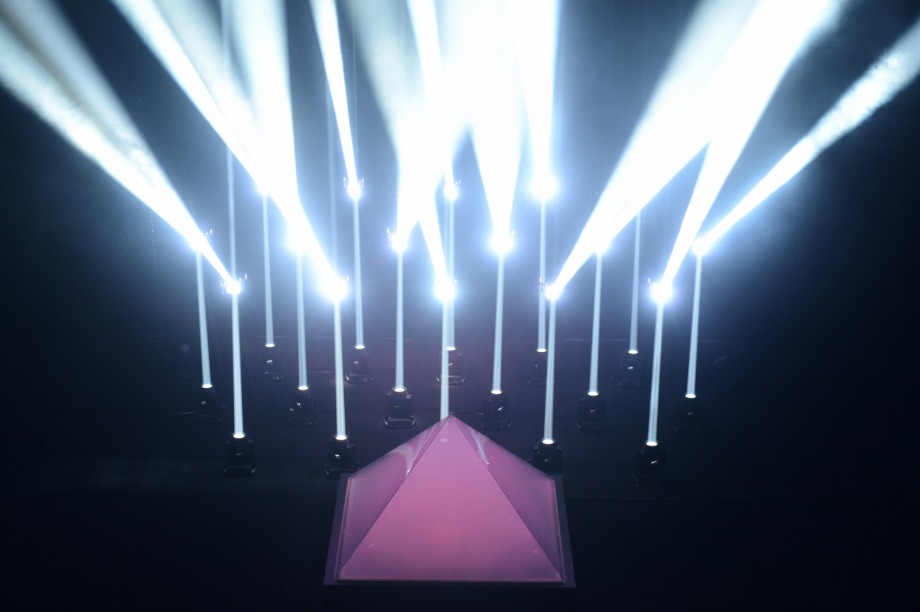 Perhaps the main hurdle, though, is price. That said, in the same way that screen technologies, projection, LED and media severs were restrictively expensive a few years ago, as drone technology evolves, so too does the cost. This creates a more palatable entry point. Such ‘democratisation’ means drones will soon no longer be limited to those with big budgets.

With techniques like projection mapping becoming creative old hat in a relatively short period of time, drones surely mark a new chapter in live events. As a unique addition to the creative director’s toolkit, they have the potential to bring completely new and original experiences to the live environment.

Despite providing creative directors with more ammunition, quadrotors – and the increasing technologizing of events in general – signal the start of a paradigm shift for the industry. If we’re going to rethink the live experience so that it can better use amazing new tech, we will also have to rethink the structure that underpins the industry.

Choreographers may be able to craft staggeringly beautiful shows of human movement. But do their skills translate to the 360 world of a quadrotor show? I would say not. And the same applies to all other transformative experiential tech where, for example, you can’t simply port traditional filmmaking techniques into virtual or augmented realities.

Of course, events will always benefit from the human touch. But with tech set to dominate top-level events in the coming years, are we now witnessing the shift of power from the creative director to creative coders of the future? When the industry becomes more skilled at creating complex drone performances that can inspire audiences the world over, the transition from creative director to creative coder can’t be far off.

Google Glass industry reaction: What it means for events