Jerome Maas, managing director at The Flash Pack looks at the human mind, and why images and videos are more likely to go viral than text-based slogans.

Some truly weird and wonderful things have gone viral over the years, without any obvious rhyme or reason connecting them to one another. Humans are, by nature, visual creatures. We’re wired to process and react to visual information quickly: the human brain can process visual cues in .25 seconds.

Considering that the attention span of the average consumer is about eight seconds, an image will always clearly communicate its point more effectively than even the pithiest slogan. The fact that we can interpret visuals so quickly is a big part of why we tend to see images and videos go viral much more often than text-based content. But not all visual content is created equal. What is it about great images that grab our attention?

According to Kevan Lee of Buffer Social, the draw has as much to do with maths as it does with biology. Visually appealing images tend to share similar proportions. All photographers know about the rule of thirds, but there’s another maths trick that’s essential to good photography – one that’s well illustrated by a now infamous shot of a (somewhat chaotic) New Year’s Eve in Manchester.

The original tweet has been shared 29,499 times and inspired hundreds of re-imaginings and parodies – which is good going for a picture of a fairly standard night out. But why? Twitter user (and BBC journalist) Groen Maar Niet Gek demonstrated that almost every element in the image lines up with the Fibonacci spiral, a property shared with many iconic, classical paintings (including the Mona Lisa). 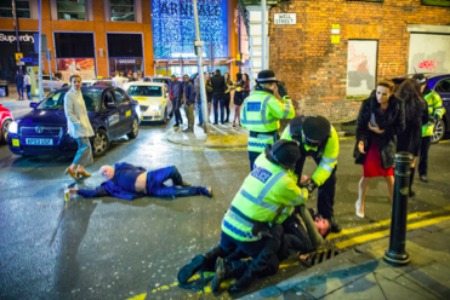 Along with its mathematical perfection, Hughes’ New Year in Manchester is emotionally evocative, a quality that’s key to any internet-shattering photo. Buffer explains that that nearly all the most successful viral images share three attributes: positive feelings such as joy and trust, the ability to evoke a diverse array of responses and emotions, and the element of surprise.

A good example of an effective "surprise" is the idea that a cell phone picture of an indulgent New Year’s Eve can share mathematical properties with highbrow works of art from the renaissance period.

The internet has sparked a fundamental change in the way media is created, disseminated and delivered. In this brave new world of media monetisation, the real challenge is getting your message out there, meaning that you need to be able to produce viral posts and images again and again. Whatever the brand message happens to be, you need to know how to translate it into an arresting image.

What makes viral images magical is that spark of unpredictability – even though science has pinned down many of the driving forces behind them, it’s impossible to know definitively which photos will and will not blow up. It’s definitely an art not a science.

In pictures: The Flash Pack's multi camera bullet rig at the GQ Awards