Smart cities and urban partnerships are big business. In the UK alone, the smart cities industry is predicted to be worth £40 billion, says Michael Brown, managing director of PsLive.

Artichoke founder Helen Marriage, London and Partners' Zanine Adams and CEO of Global Cites, David Adam help me dissect smart cities and what it means for us…

Picture this: You’ve had a bad morning at the office, you nip out for a reflective moment and a park bench senses the dark cloud over your head, returning the skip to your step by playing you your favourite song. On the journey home, a bus shelter dissuades you from getting on the number 38 to Clapton Pond, in favour of diving into a nearby bar because it knows a table for two has recently become available.

Sounds far fetched? Not really, the future is here and these types of initiatives are happening right now, with smart cities already a fully emerged movement.

The government has supported smart city growth in the UK including awarding more than £178 million, from 2013 until 2018, into research and demonstrator projects. This is just a modest indicator of the appetite for investment. Innovate UK’s Future Cities report, launched in November 2015, documented how a grant of £1.5 million, that was divided equally between 30 local authorities in the UK, went on to trigger a further £107 million in investment from other sources, including the private sector.

The bucks then are potentially big, and they are not all spent on what some may consider to be the frippery of lightening a mood, or encouraging people to stay out for a drink. There are worthy causes too, and it’s in those spaces that brands are beginning to see the opportunity for both giving something back to a community and diversifying their product offering for commercial benefit.

Take Xerox, in any office game of word association (you do play this right?) if someone shouts out that particular brand name, almost everyone in the world will respond with the word photocopier. Yet in San Francisco Xerox are reducing pollution caused by congestion and vehicle emissions through their smart transportation business, an idea that is both socially responsible and useful.

Sensors inform motorists which street parking bays have just become available to reduce the time spent driving around the block looking for on street parking. A similar sensor parking project is on the brink here in London, with Camden Council looking to spearhead this concept on our doorstep, and on a similar tip (pun intended), the city of Leeds are piloting smart bins. They let the council know when they are full, reducing overflowing bins to zero, and concomitant public health concerns while impacting positively on council coffers – bin collections are cut by a ratio of 4 to 1. Rubbish it ain’t!

If this sounds far too utilitarian for you glamorous types, let's toss some spice in the dish by showing how the same approach can actually improve a large scale event experience. Most of you will recall Lumiere London; the capital’s largest-ever light festival that took place in January. An estimated one million people visited the thirty installations which transformed the capital into a magical and immersive playground in such places as King’s Cross, Leicester Square and Carnaby Street. 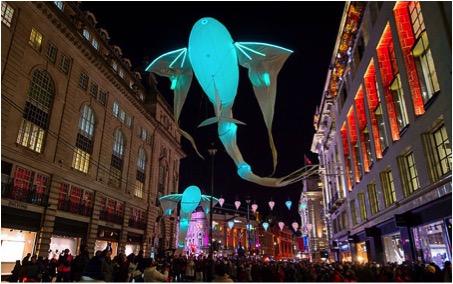 Helen Marriage is the founder of Artichoke, the producers behind Lumiere and many other art-based happenings that use global cities as the canvas. Helen explains how a smart city initiative worked unobtrusively behind the scenes to improve the visitor experience.

"Real time footfall data from and around TFL public transport hubs controlled which station entrances were to open or close, and which bus lanes to close or divert as huge influxes of crowds descended on the events. Ultimately this shaped the direction of travel for visitors, improved footflow and created a safer, better experience."

It is in the above that the future lies – the triple whammy of big data, city infrastructure and technology coming together to benefit citizens at a time and place when they most need it, is the very essence of what a smart city stands for. Now what a smart city looks like in a practical sense can be many things, as long as the outcome is to enrich the lives of those living within it. And… it can be commercial too.

We here at PsLive have been working in tandem with our Liveposter technology for Santander, the sponsors of the bikes formerly known as Boris. Data on how many bikes were currently available in the vicinity, and how far to walk to pick up the nearest one was fed in real time from bike docking stations to digital panels at bus shelters and to those with the app. We were able to record significant uplift of usage using the same data centric approach that drives the smart city concept.

Referring back to the approach Helen mentions earlier, there are examples of similar utilitarian principles to enhance experiences. Pavegen surfaces, which harvest kinetic energy from people walking over it to power nearby infrastructure, were recently used in an experience pioneered by Adidas at Victoria Park in east London. A secure running track was created for female runners to enjoy at all hours of the day removing concerns for personal safety when running in the dark. Pavegen surfaces tracked visitor movement and used it to illuminate the running track. The implications for the urban space are numerous...the least of which is in converting walking energy to power street lighting. 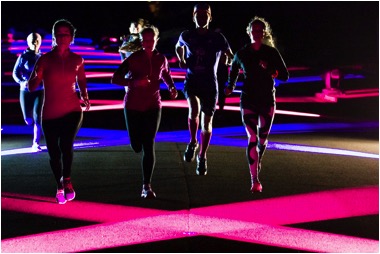 And there is no reason it can’t be used for out and out fun either. Playable cities is in many ways a part of the smart city dream and the city of Bristol has long been a pioneer in this space. The city has been clever about using public-owned space allied to technology to make their citizens engage with their environment in a fun and therefore enriching way e.g. their much championed Hello Lampost campaign from a couple of years back.

The inspiration here being that the notion of ‘places we've visited before’ can trigger memories of what we were doing there last time, who we were with and how we felt. By referencing the thousands of pre-existing identifier codes that label items of street furniture across the whole city, players were able to send text messages to e.g. lamp posts, post boxes, bollards, manholes, bins, or telegraph poles and so begin to refer to their city in a way that is more personal, fun and playful.

Projects like the High Line in New York have proved that by providing communal spaces of value for surrounding communities, strengthens the overall fabric of that community, and this works to potentially counter that isolation that some advocates of playable cities use to criticise the smart city concept. At PsLive we realise the power of smart cities and the potential to enrich the lives of citizen’s, whist giving brands the chance to be a part of the action. In response we’ve launched Urban Partnerships, a division to facilitate brand partnership campaigns that give back to society.

I have a tendency to see this as a new frontier for experiential to bring together commercial brands, local authorities and local communities to create something meaningful in publicly-owned spaces to mutually benefit all the stakeholders involved. As we see a rise in government cuts for infrastructure and essential quality of living services such as the arts or health and wellbeing, it could be that brands step in to give something back to their communities around them… and about time too.

My colleague, and head of Urban Partnerships Christopher Nicola summed this up perfectly when he said, "In the last couple of years, the smart city movement has really started pick up momentum, with demonstration (pilot) cities already reaping the rewards of more efficient, connected and data rich public infrastructure.

"The possibilities for smart cities is endless, with each piece of connected street furniture being a node that collects data and reveals insights into how people use the city. Through this, a smart city spurs on innovation and supports digital start-ups that further help people to get the most out of their environment; creating utilities and services that we haven’t even thought of yet. As for what this means for advertising - it is easy to join the dots to understand how important the role of smart cities will be in driving forward customer insights and dynamically different campaigns."

David Adam, who is chair of the smart cities panel at Advertising Week Europe 2016  and founder of Global Cities, a consultancy on the interaction between cities, technology and culture, build’s on Nicola’s comments, and in many ways has the last word on this: "Demand for urban services is going to increase at such a pace that the size of the prize is potentially limitless, and it this that is exercising the minds of the imaginative and entrepreneurial – which is where people like Helen Marriage come in. It may be that smart cities only come of age when their technology is seen as useful by the citizen, just as the iPhone generated immediate benefits for the user, our attitude to technology and its uses stimulate active demand when they become tangible and easy to use."

Is London a smart city?

I asked Zanine Adams head of events and business development at London & Partners:

"London is home to some of the world’s best tech talent and is putting technology and data at the heart of the city’s infrastructure. As such we are leading on many smart city initiatives and the upcoming London Tech Week provides the perfect opportunity to showcase these strengths.

"The smart city movement is just as important for city planning as it is for commercial enterprise. London has become a leading destination for brands looking to pioneer new digital marketing campaigns and a smart infrastructure offers further opportunities for advertisers to create innovative ways to engage with customers, while improving the experience of living in the city."

Blog: The time and place for a brainstorm